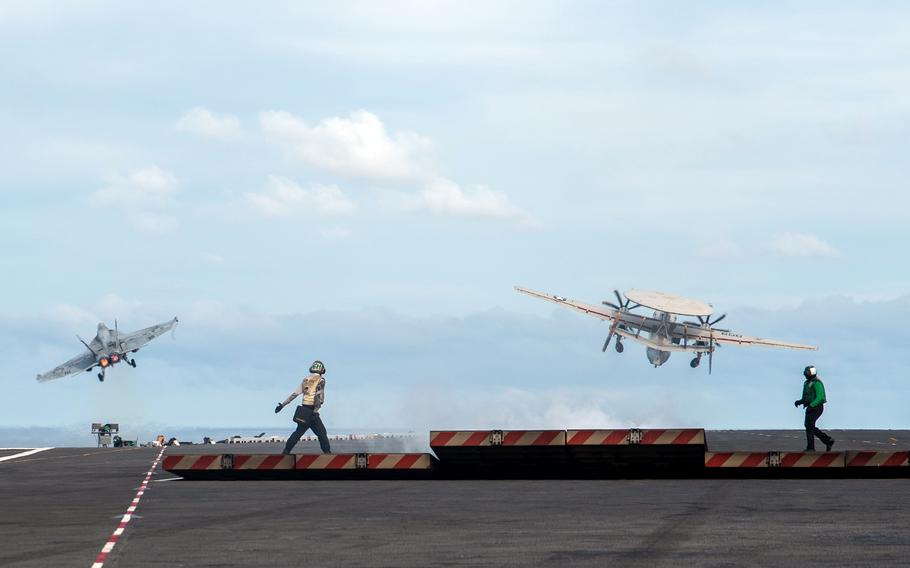 An F/A-18E Super Hornet, left, and an E-2D Hawkeye launch off the flight deck of the aircraft carrier USS Ronald Reagan in waters east of the Korean Peninsula, Sept. 28, 2022. (Dallas Snider/U.S. Navy)

CAMP HUMPHREYS, South Korea — Naval forces from the United States, Japan and South Korea are set to carry out anti-submarine warfare drills in the East Sea, also known as the Sea of Japan, for the first time in five years, the South’s Ministry of National Defense said Thursday.

The exercise scheduled for Friday is “defensive” in nature and is being conducted “to cope with the North Korean nuclear and missile threat,” the ministry said in a news release.

“The [South Korea]-U.S.-Japan anti-submarine warfare exercise this time is a part of [the ministry’s] measure to restore the levels of … trilateral cooperation for responses to North Korea’s nuclear program and missiles to pre-2017 levels,” the release said.

“And, especially, the three countries pursue this exercise in a bid to improve their capabilities to search, identify and chase North Korea’s submarines possessing the ability to launch [submarine-launched ballistic missiles],” the ministry added.

A separate news release from U.S. Pacific Fleet on Wednesday described the trilateral exercise as “forward-leaning, reflective of our shared values, and resolute against those who challenge regional stability.” “We will incapacitate any type of North Korean provocations by responding to them overwhelmingly and decisively,” South Korean navy Capt. Cho Chung-ho, commander of Battle Squadron 11, 1st Fleet, said in the Defense Ministry’s news release.

Anti-submarine drills between Seoul, Tokyo and Washington were first and last conducted in 2017. The latest iteration is happening on the heels of the 11-day U.S.-South Korean military exercise, Ulchi Freedom Shield, which ended Sept. 1.

The exercise comes two days after North Korea fired two short-range missiles toward the East Sea from Pyongyang’s Sunan area. South Korea’s military estimated the missiles reached a speed of up to Mach 6 and flew 223 miles at a peak altitude of 18 miles.

South Korea’s Joint Chiefs of Staff condemned the launch on Wednesday and said North Korea’s actions would “further strengthen the deterrence and response capabilities” of the U.S. and the South.

Vice President Kamala Harris, who arrived in South Korea on Thursday after visiting Japan, “underscored that the U.S.-[South Korea] alliance remains a linchpin of peace, stability, and prosperity in the Indo-Pacific and around the world,” according to a White House statement on Thursday.

The North has conducted 20 rounds of missile tests so far this year, a record, and U.S. and South Korean intelligence agencies have assessed the communist regime is prepared to conduct another nuclear test, its seventh test in history and its first since 2017.