Zeroing in on Chinese aggression, Harris pledges US will ‘deepen unofficial ties’ with Taiwan 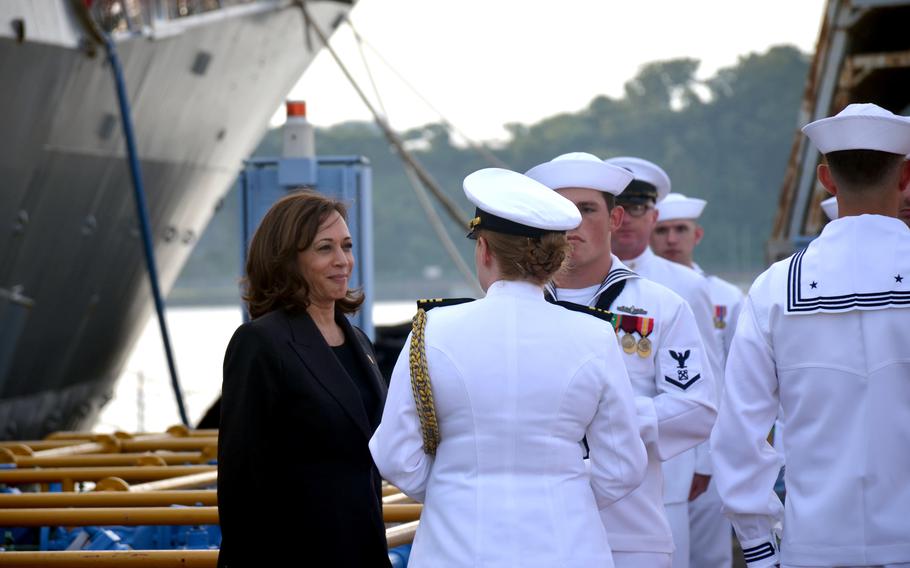 YOKOSUKA NAVAL BASE, Japan – The United States plans to “deepen unofficial ties” with Taiwan, despite anticipating “continued aggressive behavior” from China across the Indo-Pacific, Vice President Kamala Harris said Wednesday at the home of the U.S. 7th Fleet.

Speaking aboard the guided-missile destroyer USS Howard, the vice president, surrounded by sailors in dress whites, delivered remarks that largely focused on the region’s growing tensions. She touched on Russia’s attempted annexation of Ukraine and a North Korean ballistic missile launch on Sunday, but zeroed in on recent actions by Beijing.

“China has challenged the freedom of the seas; China has flexed its military and economic might to coerce and intimidate its neighbors,” she said. “We have witnessed disturbing behavior in the East China Sea and in the South China Sea – and most recently, provocations across the Taiwan Strait.” 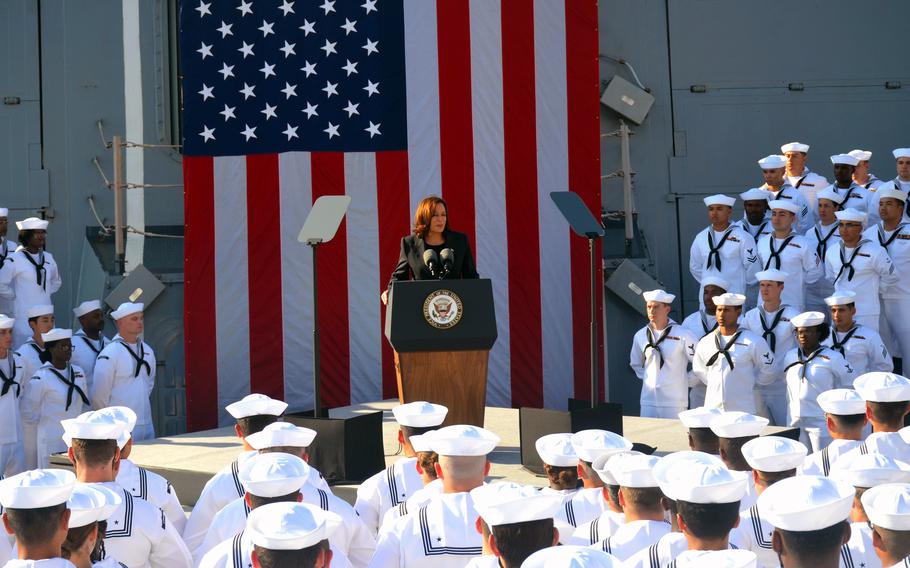 Tensions between the U.S. and China have remained high since U.S. House Speaker Nancy Pelosi on Aug. 3 became the highest-ranking official to visit Taiwan in a quarter-century. Beijing responded by launching a weeklong series of drills encircling the island. Near-daily incursions of Chinese aircraft and ships into Taiwanese waters and airspace have continued since.

Beijing considers Taiwan, which split from China in 1949, a breakaway province that must be reunified with the mainland. Chinese officials, in a white paper released in August, said they would not “renounce the use of force” to reclaim Taiwan and that the option of using “all necessary measures” is reserved.

Harris, who arrived in Japan on Monday to attend a state funeral for slain former Prime Minster Shinzo Abe, said aboard the Howard that the U.S. anticipates “continued aggressive behavior from Beijing, as it attempts to unilaterally undermine the status quo.”

“The United States believes that peace and stability in the Taiwan Strait is an essential feature of a free and open Indo Pacific,” she said.

Echoing similar sentiments made by President Joe Biden during a “60 Minutes” interview broadcast by CBS on Sept. 18, Harris vowed that the U.S. would continue to back Taiwan.

“We will continue to oppose any unilateral change to the status quo, and we will continue to support Taiwan’s self-defense consistent with our long-standing policy,” she said. “Taiwan is a vibrant democracy that contributes to the global good, from technology to help and beyond, and the United States will continue to deepen our unofficial ties.” 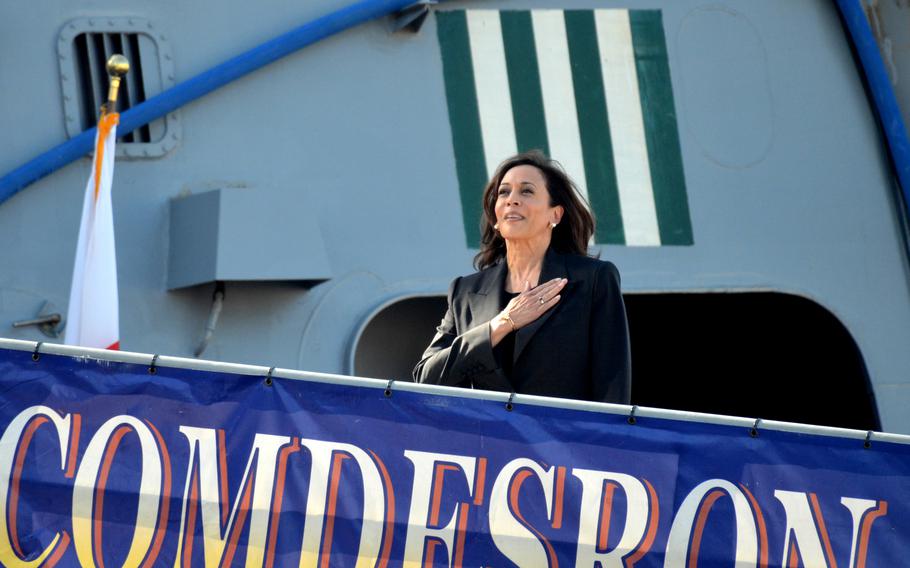 Later, during a dockside news conference, Harris clarified that “deepening ties” meant “doing the work of meeting with and reaffirming our commitment to an ally of Japan as an ally in this region,” and mentioned her scheduled visit to South Korea on Thursday.

“It’s about strengthening the trilateral relationship that we have,” she said.

Not long after Harris’ departure from Yokosuka, North Korea fired a pair of short-range ballistic missiles toward the East Sea, also known as the Sea of Japan, the South’s Joint Chiefs of Staff told reporters on Wednesday.

Harris’ stop in Yokosuka marked the third day of her four-day visit to Japan, during which she led a delegation of current and former U.S. officials to Abe’s state funeral on Tuesday. The group included U.S. Ambassador to Japan Rahm Emanuel and four others who once held his post: Sen. Bill Hagerty, U.S. Ambassador to Australia Caroline Kennedy, John Roos and Thomas Schieffer.

The funeral was held nearly three months after the former prime minister was gunned down while giving a political speech in Nara on July 8.

“We live in uncertain times,” he said, according to a Tuesday news release from the White House. “There is strategic competition. It’s something we’re very conscious of in the Pacific.”

Han said South Korea’s military alliance with the U.S. is “steadfast” and that his country plans to commit to protecting “basic common values of the global nature, including democracy and human rights and market economy,” according to a separate White House news release.

Harris will next head to South Korea on Thursday, where she’s expected to discuss North Korea threats with President Yoon Suk Yeol in Seoul and visit the Demilitarized Zone that separates the two countries. 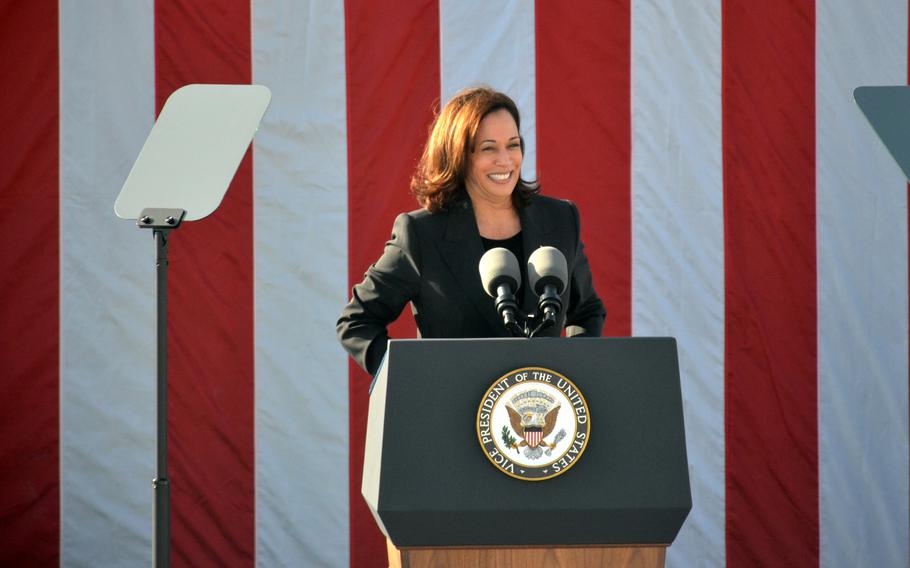