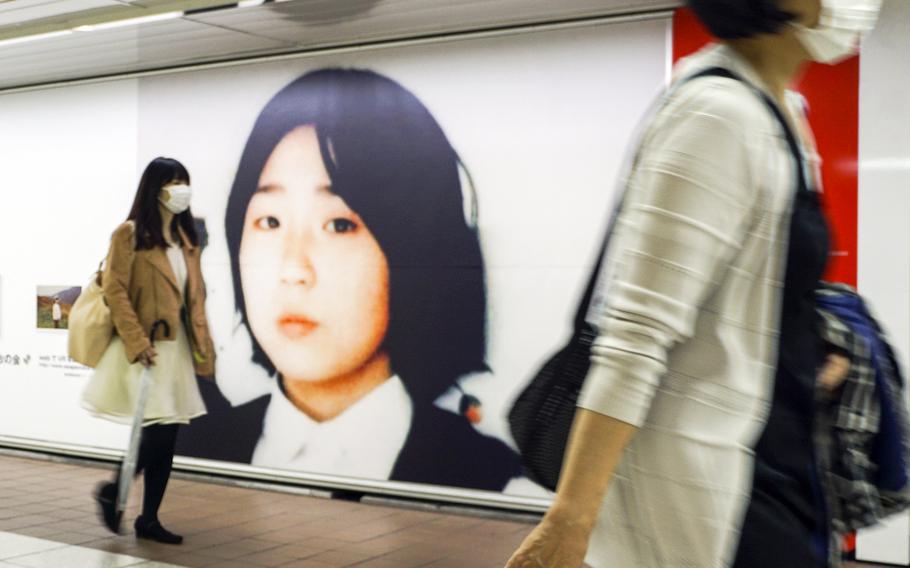 Commuters walk past photos of Megumi Yokota, who was abducted by North Koreans in 1977, at Shinjuku Station in Tokyo, May 9, 2018. (Stars and Stripes)

“I know that you were very eager and feeling a strong resentment and sense of justice against the incidents involving the abduction of Japanese citizens by North Korea since before becoming a member of the house of representatives,” Kishida said as he faced Abe’s urn.

The prime minister, his back to the audience, stood beneath a towering portrait of Abe among a cascade of green, yellow and white flowers and the Japanese flag.

“I think it was very regrettable for you not to achieve repatriation of the victims,” he said. “I will carry on your determinations and make utmost efforts to realize the reversion of the abductees.”

While the sentiment was largely seen as admirable, at least one expert in international politics believes there is a low probability of his vow being realized.

“North Korea is taking this issue as a package with economic problems and nuclear weapons-related problems,” said Junjiro Shida, an associate professor of international politics at Meio University on Okinawa. “Japan must solve all these problems together to solve the abduction problem.” 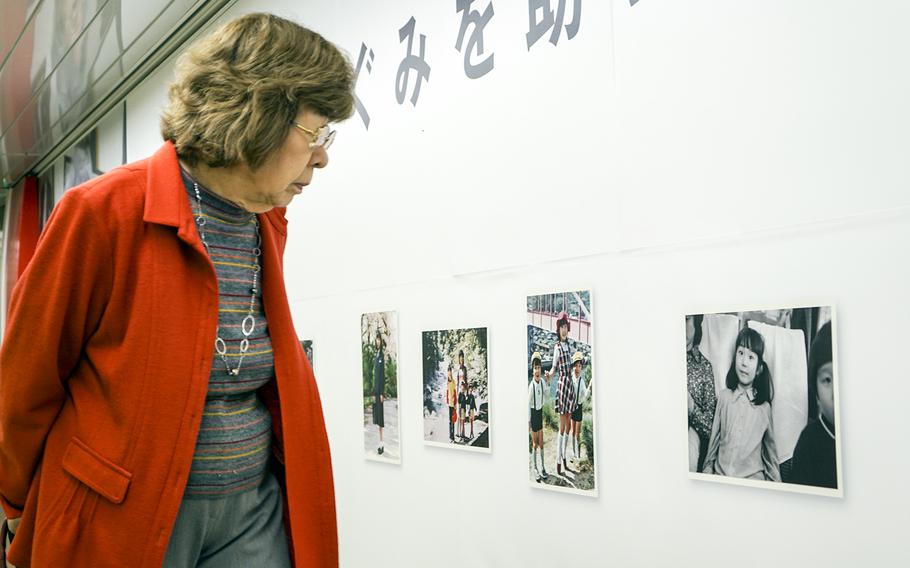 A commuter looks at photos of Megumi Yokota, who was abducted by North Koreans in 1977, at Shinjuku Station in Tokyo, May 9, 2018. (Stars and Stripes)

All Kishida can do is work with the international community to publicize the issue, much as Abe did in his two stints at the head of the Tokyo government, Shida told Stars and Stripes by phone Wednesday.

Ryutaro Hirata, 71, director-general of the advocacy group National Association for the Rescue of Japanese Kidnapped by North Korea, hopes that Kishida will take Abe’s work a step further.

“Abe started this movement,” Hirata told Stars and Stripes by phone Tuesday. “This was inherited by ex-Prime Minister (Yoshihide) Suga, and now Prime Minister Kishida. I’d like him to do his best and reach a Japan-North Korea summit meeting.”

Hirata also hopes Kishida will work with the international community to maintain or strengthen economic sanctions to be used as leverage. But the issue won’t be easily resolved, because North Korean officials keep “lying” about the abductions, he said.

“We want the government to get information about the kidnapped,” Hirata said. “What are they doing? How is their situation? I think that is the most important thing.”

A number of family members of the abductees attended Abe’s public funeral Tuesday to pay their respects, Hirata said.

The issue of abducted Japanese citizens began to take shape in the 1970s and 1980s when Japanese people began disappearing at home and abroad under suspicious circumstances, according to information on the Ministry of Foreign Affairs website.

Tokyo honed in on Pyongyang as the culprit after discussions with North Korean defectors.

Since 1991, the government of Japan has brought up the issue at “every available opportunity,” the ministry said. At the first Japan-North Korea summit in September 2002, then-North Korean leader Kim Jong-il admitted to abducting 13 Japanese citizens, but blamed rogue groups motivated by patriotism.

Japan believes they were kidnapped by state agents to provide cultural intelligence.

At a subsequent summit two years later, North Korea vowed to resume thorough investigations to obtain a full accounting of what had happened to all abductees, but no such accounting ever materialized.

Japan believes there were at least 17 citizens abducted between 1977 and 1983, according to the Foreign Ministry. Another 883 cases remain under investigation.

In 2014, North Korea created a special investigative committee to track down Japanese citizens in its country in exchange for loosened sanctions, but the issue was complicated by other foreign policy matters, such as North Korea’s drive to procure nuclear weapons, the ministry said. It disbanded the committee in 2016 due to condemnations over nuclear testing.

Abe brought up the issue in February 2018 to North Korean diplomat Kim Yong-Nam at a reception hosted by then-South Korean President Moon Jae-In during the PyeongChang Winter Olympics, the ministry said. And, at Abe’s request, President Donald Trump broached the subject with North Korean leader Kim Jong Un during summits in 2018 and 2019.

Kishida expressed a desire to meet with Kim “without preconditions” to resolve the issue after taking office in October 2021, Kyodo News reported Oct. 8, 2021. A spokesman for North Korea’s foreign ministry replied with a statement saying the issue was “long ago resolved.”

Abe resigned in 2020, citing health concerns. He was assassinated by a lone gunman on July 8 while giving a campaign speech outside a train station in Nara.

Japan and North Korea have no diplomatic relations.