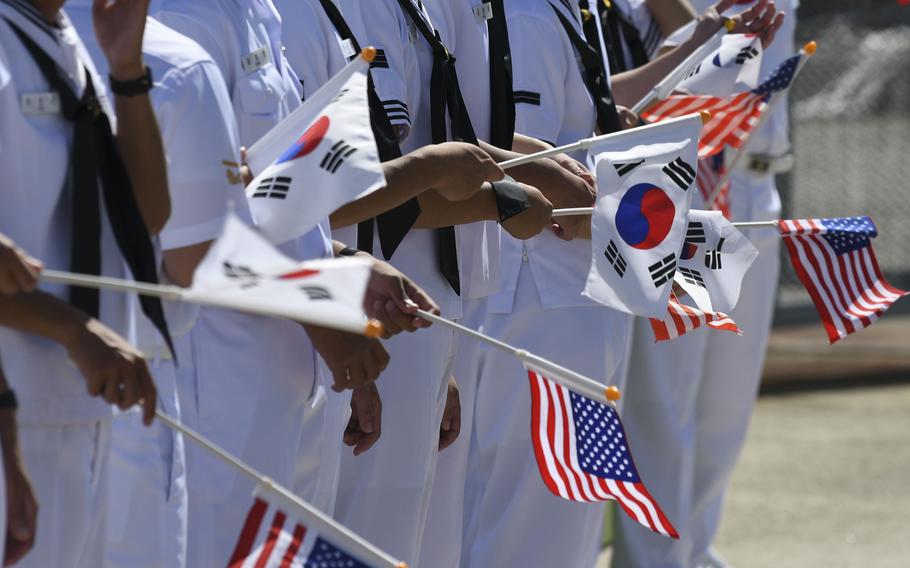 The joint training is centered on anti-surface warfare and strategic maneuvers, South Korea’s Ministry of National Defense said in a news release Monday. The goal of the exercise, which includes more than 20 ships from both countries, is to prepare “for North Korean provocations with an aim to improve capabilities” of the U.S. and South Korea, the ministry said.

“The [South Korean] and U.S. navies are going to display their power and determination through this exercise,” Rear Adm. Michael “Buzz” Donnelly, commander of Carrier Strike Group 5 and Task Force 70, said in the release. “The [South Korean]-U.S. alliance is the strongest alliance in the world, and we are getting stronger through regular exercises and the close friendly relations.”

The Ronald Reagan Carrier Strike Group, which includes the destroyers USS Barry and Benfold and the guided-missile cruiser USS Chancellorsville, arrived on South Korea’s southern coast for a port call on Friday. The visit was the USS Ronald Reagan’s first in Busan since 2017. 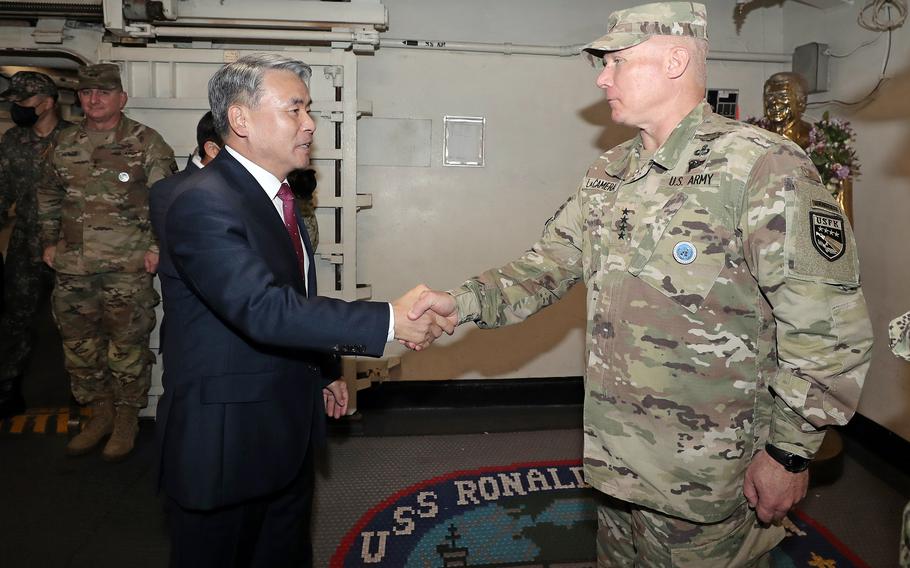 “The [South Korea] and U.S. alliance has mutually strived to promote peace and stability on the peninsula for the last 70 years,” South Korean navy Adm. Kim Kyung Cheol said during a press conference aboard the Ronald Reagan on Friday. “The [South Korean] and U.S. navies will conduct a variety of activities to bolster the navies’ friendship.”

Donnelly stressed that the port call and military drills were scheduled in advance and that he would leave “leave the messaging to the diplomats.”

The joint exercise began one day after North Korea fired a short-range ballistic missile from its northwestern border toward the East Sea, also known as the Sea of Japan. The weapon was estimated to have flown 372 miles at a peak altitude of 37 miles with speeds of up Mach 5, South Korea’s military said on Sunday.

North Korea has carried out 18 rounds of missile tests so far this year, a record, and is suspected by U.S. and South Korean intelligence officials of having prepared for a nuclear test.

North Korea’s state-run media routinely rails against joint exercises between the U.S. and South Korea and accuses the allies of conspiring to launch a military campaign to overthrow the communist regime. Pyongyang on Sept. 8 reaffirmed its intent to produce and, if necessary, use nuclear weapons against adversaries if threatened, according to the state-run Korean Central News Agency.