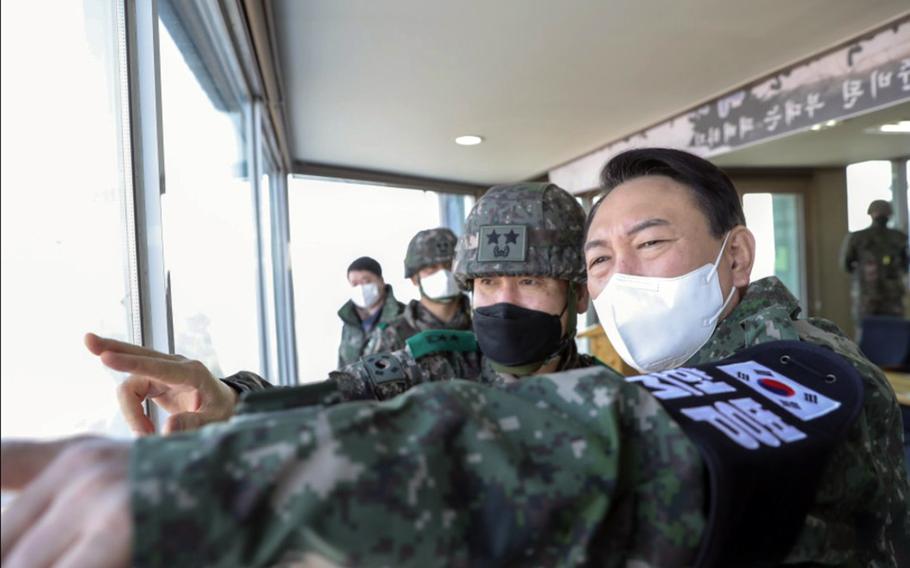 Yoon Seok Youl visits the Demilitarized Zone between North and South Korea, Dec. 20, 2021, before his election as the South’s president. (People Power Party)

CAMP HUMPHREYS, South Korea — South Korea’s presidential office is on an around-the-clock alert amid expectations that the North may soon conduct its seventh nuclear test, a government official told news agencies on Sunday.

“As North Korea's provocations have become more frequent, we're putting all of our effort into maintaining a readiness posture with a sense of alertness,” an official said, according to Yonhap News.

Pyongyang’s barrage of over 40 missiles in 26 rounds of testing so far this year, along with numerous artillery drills, are believed to be part of preparations for its first nuclear test since 2017, officials have said. North Korea last fired a ballistic missile on Friday, its ninth round of testing in three weeks.

The presidential office’s remarks come after South Korean Vice Defense Minister Shin Beom Chul told Yonhap on Friday that North Korea may conduct not just one nuclear test but “two or three ... in a row.”

State and national security officials from the United States and South Korea have warned for months that the North has prepared to conduct a nuclear test. Japanese Defense Minister Yasukazu Hamada issued the same warning to the country’s lawmakers Thursday, saying Pyongyang’s weapons technology has developed at a “rapid pace” and it may be “more difficult to intercept” North Korean missiles.

The communist regime claimed its last nuclear test on Sept. 3, 2017, performed underground in the mountainous northeast region of North Korea, was a hydrogen bomb. The U.S. Geological Survey registered the explosion as a 6.3 magnitude earthquake.

A nuclear test now would dramatically raise tensions with North Korea. While Seoul has delivered stern warnings and enacted economic sanctions against Pyongyang over its series of missile and artillery tests this year, U.S. and South Korean leaders also warned of new repercussions should it detonate another nuclear device.

“If North Korea conducts a nuclear test, the level of our response would be entirely different” from previous tests, South Korean Defense Minister Lee Jong-sup said during a press conference in August.

Deputy Secretary of State Wendy Sherman in June also said the U.S. was prepared for another North Korean nuclear test and that “the entire world will respond in a strong and clear manner.”

The government-funded Korea Institute for Defense Analyses estimated that North Korea is at least four nuclear tests away from constructing a tactical nuclear weapon or pairing nuclear warheads to multiple, independently targetable reentry vehicles, according to a September report from South Korean lawmaker Shin Wonsik.

North Korea codified its preemptive use of nuclear weapons during a parliamentary session in September, eight months after the regime suggested it would “immediately” resume weapons tests that were suspended since the summits between then-Presidents Donald Trump and Moon Jae-in of South Korea, and North Korean leader Kim Jong Un in 2018 and 2019.

The North said it would launch a nuclear strike “automatically” should its leaders be threatened or attacked, according to a state-run Korean Central News Agency report on Oct. 8.

North Korea claims through its state media that its missile and nuclear tests were in response to provocations from South Korea and its allies, including the recent joint military drills with the nuclear-powered aircraft carrier USS Ronald Reagan in waters near the Korean Peninsula.