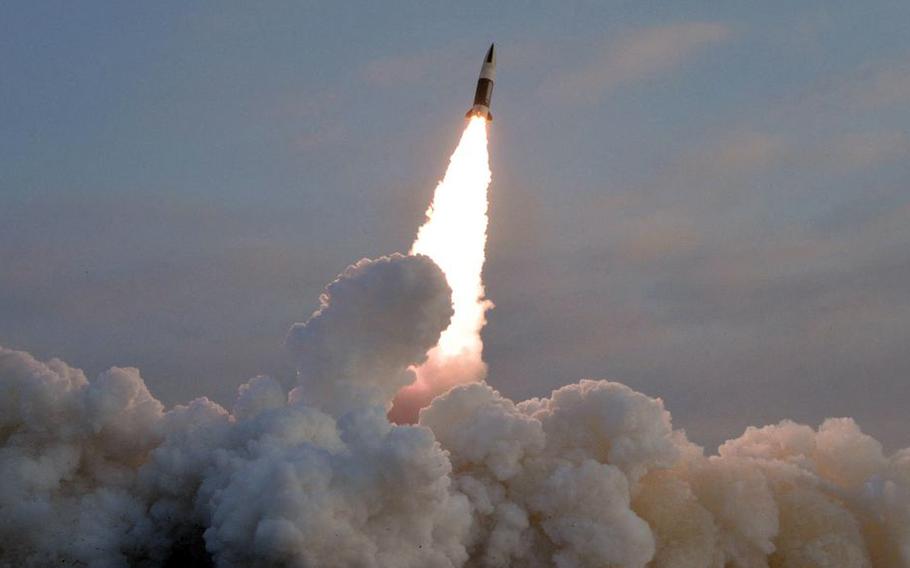 The U.S. military and Japanese government warned people to take cover Tuesday morning after North Korea fired a ballistic missile that sailed over northern Japan before splashing down in the Pacific Ocean.

The launch, which South Korea’s Joint Chiefs of Staff suspects to be an intermediate-range ballistic missile fired around 7:23 a.m. from northern Jagang province near the border with China, marked the communist regime’s fifth round of weapons testing in the past 10 days.

It’s also the first time in five years a North Korean missile has flown over its neighbor to the east. It traveled roughly 2,796 miles at a peak altitude of 602 miles and at Mach 17, or 17 times the speed of sound, South Korea’s military estimated.

“Missile launch. Missile launch. A missile seems to have been launched from North Korea,” the Japanese government said in an alert at 7:27 a.m. “Please evacuate into buildings or in basements.”

A similar alert from Misawa Air Base, home of the 35th Fighter Wing in Aomori prefecture, directed “ALL personnel to stay indoors until further notice.”

The U.S. Embassy Tokyo warned its Twitter followers about a possible missile heading toward Japan, and later tweeted that the projectile had fallen outside of the country’s exclusive economic zone.

The missile is presumed to have passed over Aomori prefecture, where Misawa is located, before landing at 7:44 a.m., Chief Cabinet Secretary Hirokazu Matsuno said during a news conference.

Matsuno described the launch as an “extremely problematic act” that threatened the safety of aircraft, ships and residents.

“The string of North Korea’s actions, including repeated launches of ballistic missiles, are a threat to the peace and security of this region as well as for the world, and it is a serious challenge to the international community as a whole, including our country,” he said.

No action was taken by the Japanese Self-Defense Forces to shoot down the missile “since no damages were expected,” Matsuno said, though officials were working to confirm whether missile debris had fall on Japanese territory. Subways in Sapporo, the capital of Hokkaido, were halted between 7:27 a.m. and 7:45 a.m., according to Japanese broadcaster NHK. The East Japan Railway Co. said the Tohoku Shinkansen, or bullet train, running in northern Japan temporarily stopped some of its services.

An aircraft heading to Haneda International Airport in Tokyo from Aomori Airport was delayed for about 20 minutes, NHK reported. Other flights in Aomori, including those to and from Misawa Airport, had not been affected.

The South Korean military is “maintaining a full readiness posture while closely cooperating” with the United States, the Joint Chiefs said in a text message to reporters.

“A reckless nuclear provocation like this would face the determined responses of allies, including our military, and the international society,” he said.

An NSC statement following the meeting described the launch as a “grave provocation” and a “clear violation of U.N. Security Council resolutions.”

A North Korean missile, the Hwasong-12, last flew over Japan on Sept. 15, 2017. The launch, also from Jagang province, prompted the Japanese government to warn people to seek shelter. The missile splashed into the Pacific Ocean and no damages or injuries were reported. Tuesday’s launch may have been the farthest flying missile tested on a standard trajectory by North Korea, according to Yang Uk, an associate research fellow at the Asan Institute for Policy Studies in Seoul.

Yang, who theorized that Tuesday’s missile was a Hwasong-12, referenced recent launches conducted at various hours and spots throughout North Korea.

“They are shooting different kinds of missiles from different bases at very different timeframes,” he told Stars and Stripes by phone. “They are showing off that they can shoot from anywhere in North Korea at any time they want.”

An intermediate-range ballistic missile fired at a lofted trajectory in January flew about 500 miles at a peak altitude of 1,240 miles, the South Korean military said at the time.

The specifications of the IRBMs theoretically puts the U.S. territory of Guam within range.

Ground and air forces from the two countries wrapped up the 11-day Ulchi Freedom Shield exercise on Sept. 1 after a five-year pause.

U.S., South Korean and Japanese navies for the first time in five years also held a trilateral exercise in the East Sea, also known as the Sea of Japan. Those drills, which were described by the U.S. and South Korean militaries as “defensive,” included the nuclear-powered aircraft carrier USS Ronald Reagan and its strike group and an unnamed Navy submarine.

North Korea has continued to rebuff attempts to negotiate with Yoon. The South Korean president in August floated an “audacious” offer to the North: the South would offer economic and medical assistance in exchange for denuclearization.