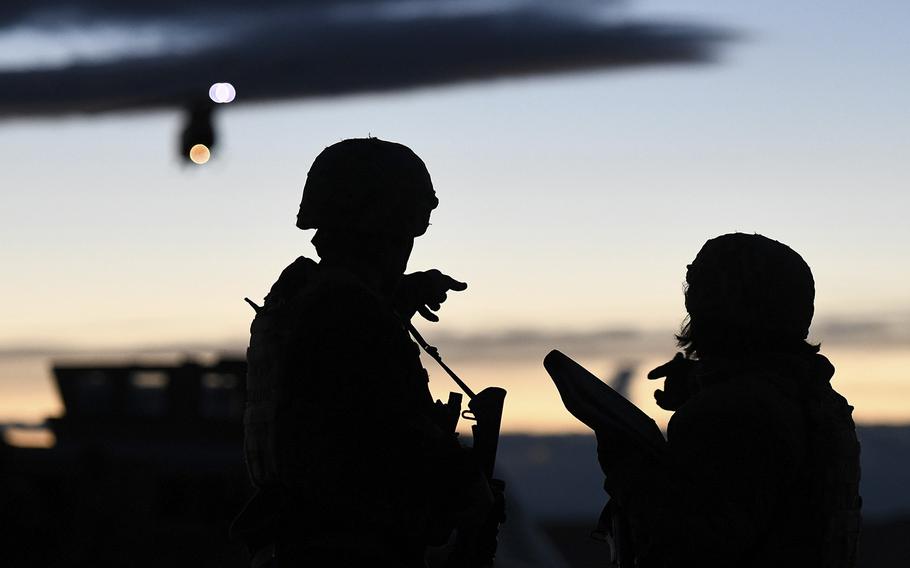 The Pentagon released a trio of documents Thursday outlining the United States' national defense strategy, its nuclear posture and its policy regarding missile defense - a much-anticipated public accounting of how the Biden administration plans to counter threats from adversary nations at a time when war and the threat of compound conflicts are escalating.

The documents - which Defense Secretary Lloyd Austin referred to as "the department's North Star" - reflect an outlook he has long been voicing: that China is the main, "pacing" challenge for the United States.

Russia, the documents acknowledge, presents a more "acute" threat, particularly because its president, Vladimir Putin, is actively waging a war in Ukraine and threatening to employ nuclear weapons in combat. But as Austin put it, Moscow still "can't systemically challenge the United States over the long term."

While the assessments are largely in keeping with positions the Defense Department has previously outlined, there are nonetheless a few items that are likely to inspire controversy - in part because of global developments that aren't directly addressed in the 80 unclassified pages.

The 2022 Nuclear Posture Review offers a notable assessment of Iran's nuclear ambitions. It puts some hotly debated weapons systems on the chopping block - including a nuclear gravity bomb and a submarine-launched nuclear missile with staunch defenders in Congress.

Perhaps most strikingly, the authors acknowledge that the documents were not updated since March - when the classified versions of them were shared with Congress - despite a war in Ukraine that was in its infancy when they penned their assessments.

The Pentagon flags Moscow's Ukraine invasion as the example that "underscores that nuclear dangers persist, and could grow, in an increasingly competitive and volatile geopolitical landscape." It notes that Russia has brandished the threat of nuclear weapons "as a shield behind which to wage unjustified aggression against their neighbors."

But while the documents are explicit in stating the Pentagon's objectives, its prescriptions for tamping down the crescendo of the nuclear drumbeat emanating from the Kremlin are general in nature. The document speaks about the need for "integrated deterrence" and ensuring that the United States and its allies continue to "maintain a very high bar for nuclear employment," to reduce the risk of escalation. It acknowledges that "changes in U.S. strategy and force posture may be required" to achieve deterrence - but does not contemplate the specifics of what that would look like.

Part of that may be due to the fact that the documents released Thursday are only the unclassified version of the Pentagon's reviews. But while the Russian threat is "acute," the Pentagon does not seem to believe that a game-changing move from the Kremlin is imminent. Austin threw cold water Thursday on the idea that nuclear or other radioactive weapons will be used in the Ukraine conflict anytime soon.

"We have not seen anything to indicate that Putin has made a decision to use a dirty bomb," he said.

2. China on the horizon

While Russia's invasion of Ukraine has unlocked the Pentagon coffers, China's long-term nuclear ambitions have spooked the Defense Department to the greatest degree. The National Defense Strategy calls China the "most comprehensive and serious challenge to U.S. national security," while the Nuclear Posture Review states that "by the 2030s, the United States will, for the first time in its history, face two major nuclear powers as strategic competitors and potential adversaries."

Or as Austin put it to reporters Thursday, China remains the one adversary "both with the intent to reshape the international order and increasingly the power to do so."

But the Pentagon acknowledges that it is still looking for answers about how to address the challenge posed by Beijing and ensure it does not lead to war.

The documents note that China and Russia, despite sometimes diverging objectives, maintain a troubling alliance - particularly given the "sophistication" of China's missile technology and its demonstrated ability to try to "close the gap" with the United States. When it comes to nuclear warheads, the Nuclear Posture Review notes, China is on pace to have at least 1,000 by the end of this decade.

The writers of the document are frank in their acknowledgments of where Beijing has eluded Washington's best efforts to rein things in. The United States "has made little progress" with China when it comes to arms-control frameworks, the document notes - a problem exacerbated by Beijing's resistance to participating in international negotiations. And while the Missile Defense Review stresses that the Pentagon "will continue to rely on strategic deterrence," the Pentagon admits a few paragraphs later that is difficult, given China's "efforts and activities to contest the rules-based international order."

When it comes to Iran, the Defense Department's new policy-setting documents and the Pentagon's leaders are occasionally in conflict.

"Iran is moving ahead on its nuclear program, supporting dangerous armed proxies and even exporting drones that Russia has used to terrorize Ukrainian civilians," Austin told reporters Thursday, in touting the newly released reports.

That's not precisely the sentiment expressed in the reports' pages.

Though the Pentagon writes that Iranian nuclear activities "are of great concern" and that it remains Defense Department policy "to prevent Iran from acquiring a nuclear weapon," the Nuclear Posture Review also states plainly that "Iran does not today possess a nuclear weapon and we currently believe it is not pursuing one."

That's not just an aberrant phrasing, either. The National Defense Strategy is careful to distinguish between Iran's capacities and its intentions, stating that "Iran is taking actions that would improve its ability to produce a nuclear weapon should it make the decision to do so."

That decision, though, by the Pentagon's own assessments, has not been taken.

Unlike Iran, the documents paint North Korea's ventures as menacing in nature. The Missile Defense Review states that the hermit kingdom "continues to improve, expand, and diversify its conventional nuclear missile capabilities, posing an increasing risk to the U.S. homeland and U.S. forces in theater, as well as regional Allies and partners." The report notes recent missile tests, including some weapons Pyongyang claims have hypersonic capabilities, and reminds that "most of North Korea's ballistic missiles have an assessed capability to carry nuclear payloads."

The Nuclear Posture Review also sounds an alarm, stating that while North Korea is not a threat on the level of Russia and China, "it poses a persistent threat and growing danger to the U.S. homeland and the Indo-Pacific region as it expands, diversifies and improves" its nuclear, ballistic missile and military capabilities.

The response is all tough talk. "Any nuclear attack by North Korea against the United States or its Allies and partner is unacceptable and will result in the end of that regime," the Nuclear Posture Review states, in one of the most unequivocal throw-downs in the document. "There is no scenario in which the Kim regime could employ nuclear weapons and survive."

The military is retiring two models of nuclear weapon, despite protests from members of Congress who have tried to save them from the chopping block. The first, the B83-1 gravity bomb, has over a megaton of capacity - a punch that makes it a potentially useful tool for obliterating hard, underground targets. But the bombs, which have been in the arsenal since the 1980s, are becoming expensive to maintain - and, the Pentagon says, simply aren't as versatile or uniquely equipped to command privileged status anymore.

The other is a submarine-launched cruise missile known as the SLCM-N (the "N" stands for "nuclear"), approved during Donald Trump's presidency - and which was the subject of fierce controversy on Capitol Hill after the Biden administration indicated in its budget proposals this year that it planned to ax funding for the program.

The SLCM-N comes in on the opposite end of the nuclear spectrum from the B83-1 - with its lower yield, it is considered a "tactical" nuclear weapon. Supporters of the SLCM-N have questioned why the administration would decommission it mid-development at a time when concern is growing that Russia could use its vast arsenal of tactical nuclear weapons in Ukraine. But administration officials insist it is an unnecessary, duplicative weapon and are determined to scrap it, no matter the blowback.

"It has zero value," for Russia and Ukraine, a senior defense official said Thursday on the condition of anonymity to discuss sensitive program decisions, noting that even if the SLCM-N were fully funded, "it would not arrive until 2035."

The Pentagon's policy documents are, together, a quadrennial vitals check on where U.S. strategic defense stands and where it ought to be going. They lay out departmental philosophy on critical national security threats and what defenses should be invested in to meet them.

Except the United States' nuclear policy remains publicly undefined in some key respects. The writers of the Nuclear Posture Review defer to President Joe Biden and his advisers to determine whether there should be updates to the policy governing the use of nuclear weapons if and when deterrence fails - a possibility that Biden has stated is nearer than at any point since the Cuban missile crisis.

The document also states that while "moving toward a sole purpose declaration" remains a goal, the options its writers considered - including adopting a "No First Use" doctrine - "would result in an unacceptable level of risk." As a result, it will be left to future Pentagon strategists and the White House to contemplate any eventual moves to articulate potential limits to how far the United States is prepared to go in its developing arms race with China and Russia.