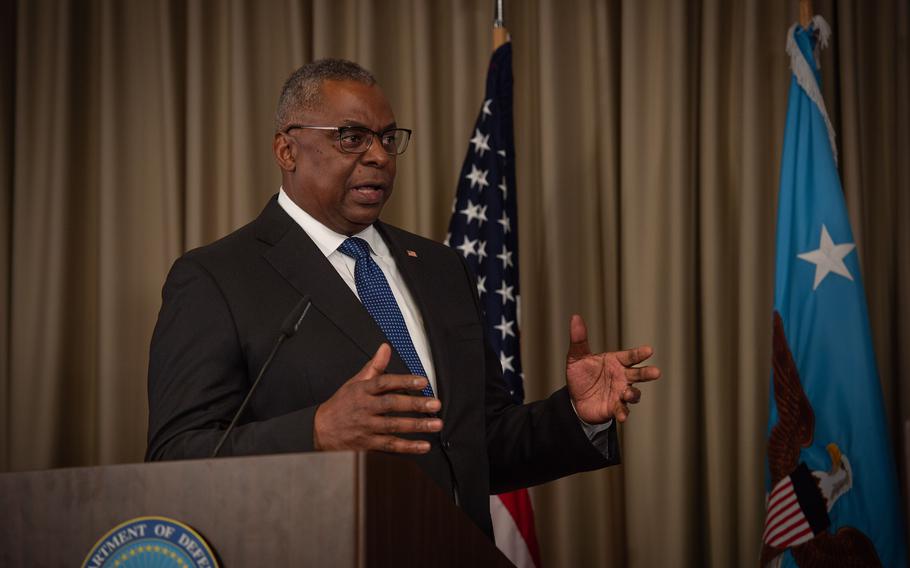 Defense Secretary Lloyd Austin answers questions from reporters in September at Ramstein Air Base in Germany. Austin on Thursday, Oct. 27, 2022, announced the Defense Department’s first National Defense Strategy in four years, a comprehensive security assessment that identifies China, Russia, North Korea, Iran — and climate change — as some of the top threats for which the U.S. military is preparing. (Alexander Riedel/Stars and Stripes)

WASHINGTON — China remains the greatest threat for U.S. interests at home and abroad, despite Russia's ongoing war in Ukraine, according to a new Pentagon defense strategy released Thursday.

“[China is] the only country with both the intent to reshape the international order, and, increasingly, the economic, diplomatic, military, and technological power to do so,” Defense Secretary Lloyd Austin states in the foreword to the 2022 National Defense Strategy.

The Defense Department unveiled its first National Defense Strategy in four years, a comprehensive security assessment that identifies China, Russia, North Korea, Iran — and climate change — as some of the top threats for which the U.S. military is preparing. It is the first defense strategy issued under the administration of President Joe Biden.

“[China] remains our most consequential strategic competitor for the coming decades. I have reached this conclusion based on [its] increasingly coercive actions to reshape the Indo-Pacific region and the international system to fit its authoritarian preferences, alongside a keen awareness of [Beijing’s] clearly stated intentions and the rapid modernization and expansion of its military,” Austin said.

The Pentagon released the 2022 National Defense Strategy concurrently with its nuclear posture and missile defense reviews, which detail the U.S. military’s key priorities and approaches to modern warfare worldwide. It’s a department-specific follow up to the National Security Strategy that Biden released earlier this month.

The 80-page strategy is the Pentagon’s unclassified version. Its classified version was given to Congress last spring, not long after Russia invaded Ukraine, but officials said there isn’t a lot of foundational difference between the two versions.

“In these times, business as usual at the department is not acceptable,” Austin said. “The 2022 NDS lays out our vision for focusing the Defense Department around our pacing challenge, even as we manage the other threats of our swiftly changing world. It builds on my 2021 message to the force, which stressed as core values defending the nation, taking care of our people, and succeeding through teamwork.”

Biden and other military officials have previously identified China as a potential threat to U.S. interests, in part, because it has made aggressive statements toward Taiwan, which it considers a breakaway territory. Air Force Gen. Jacqueline Van Ovost, commander of the U.S. Transportation Command, said earlier this month that Beijing creates a unique challenge because China and Taiwan are located in the vast Pacific Ocean, which poses some logistical difficulties in transporting military equipment, weapons and personnel.

The defense strategy identifies Russia as an “acute” threat.

“We chose the word ‘acute’ carefully,” Austin told reporters, adding the word was chosen because it’s unlikely that Russia can “systemically challenge the U.S. over the long term.”

Senior defense officials who spoke on the condition of anonymity underscored the importance of nuclear weapons as a deterrent. Russian President Vladimir Putin on multiple occasions has threatened the use of nuclear weapons in Ukraine, particularly after Moscow sustained heavy losses during Ukraine’s successful counteroffensive.

“Our central charge is to develop, combine, and coordinate our strengths to maximum effect,” Austin said in the foreword to the defense strategy.

“We live in turbulent times. Yet, I am confident that the department, along with our counterparts throughout the U.S. government and our allies and partners around the world, is well positioned to meet the challenges of this decisive decade.”

A significant component to the new strategy, officials said, is the U.S. military’s need to plan for a scenario in which it might need to address multiple conflicts at once.

“In a potential conflict with a competitor, the United States would need to be able to deter opportunistic aggression by another competitor,” according to the strategy. “We will rely in part on nuclear weapons to help mitigate this risk, recognizing that a near-simultaneous conflict with two nuclear-armed states [Russia and China] would constitute an extreme circumstance.”

The Pentagon also issued its Nuclear Posture Review and Missile Defense Review on Thursday. For the first time, officials said, all three documents were integrated, meaning Defense Department officials and experts across portfolios were involved in putting together the reviews.

One senior defense official described the process as everyone having a hand in “baking the cake.” The official said the strategy is a “call to action for the defense enterprise to incorporate allies and partners at every stage of defense planning.”

After China and Russia, the National Defense Strategy identifies other “persistent threats” to include North Korea and Iran.

“North Korea continues to expand its nuclear and missile capability to threaten the U.S. homeland, deployed U.S. forces, and [South Korea] and Japan, while seeking to drive wedges between the United States, [South Korea-] and United States-Japan alliances,” the strategy states. “Iran is taking actions that would improve its ability to produce a nuclear weapon should it make the decision to do so, even as it builds and exports extensive missile forces, uncrewed aircraft systems, and advanced maritime capabilities that threaten chokepoints for the free flow of energy resources and international commerce.”

Some of the important challenges that will affect U.S. national security, the department said, also include global threats such as pandemics and climate change. The Pentagon refers to these as “transboundary challenges.” Austin called them threats that “do not respect borders.”

“Beyond state and non-state actors, changes in global climate and other dangerous transboundary threats are already transforming the context in which the department operates,” according to the strategy. “Increasing temperatures, changing precipitation patterns, rising sea levels, and more frequent extreme weather conditions will affect basing and access while degrading readiness, installations, and capabilities.

“Climate change is creating new corridors of strategic interaction, particularly in the Arctic region. It will increase demands, including on the joint force, for disaster response and defense support of civil authorities, and affect security relationships with some allies and partners.”

The coronavirus pandemic is a good example of how transboundary challenges can impact national security, defense officials said. The pandemic is still impacting many countries, global supply chains and the U.S. defense industrial base – and is requiring “substantial commitment” of resources and is highlighting the immense costs and risks of future biological threats.

“Together, these rapidly evolving features of the security environment threaten to erode the United States’ ability to deter aggression and to help maintain favorable balances of power in critical regions,” it states. “[China] presents the most consequential and systemic challenge, while Russia poses acute threats — both to vital U.S. national interests abroad and to the homeland.”

Two main points of the department’s Nuclear Posture Review, the officials said, are maintaining a safe nuclear deterrent and taking steps to reduce the risks of a nuclear war.

“As long as nuclear weapons exist, the United States and other nuclear weapon states have a special charge to be responsible custodians of these nuclear capabilities and work with a sense of urgency to create a security environment that would ultimately allow for their elimination,” according to the strategy. “Nuclear weapons have not been employed in more than 75 years. While ensuring our security, our goal is to extend this record of non-use and reduce the risk of a nuclear war that could have catastrophic effects for the United States and the world.”

Austin said the Pentagon is confident that it’s effectively identifying traditional and emerging defense challenges and responding accordingly. That includes, he said, taking care of America’s troops. For example, he said, a decision to increase pay for service members by more than 4% will take effect in January.

“We do not shy away from tough challenges, especially when it comes to securing our national interests and defending our national values,” he said. “To meet this moment, we will tap into our core strengths: our dynamic, diverse, and innovative society; our unmatched network of allies and partners, and the tremendous men and women of our armed forces.”

Thursday’s release came one day after Austin and Army Gen. Mark Milley, chairman of the Joint Chiefs of Staff, met with Biden at the White House to discuss the latest in Ukraine and some of the other threats outlined in the National Defense Strategy.

“There are no easy solutions,” Biden told Austin and Milley at the meeting, according to the White House. “But I know you and your teams are up to the task. … Modernizing and strengthening our military is a core source of our national strength and is a priority for me and my administration.”