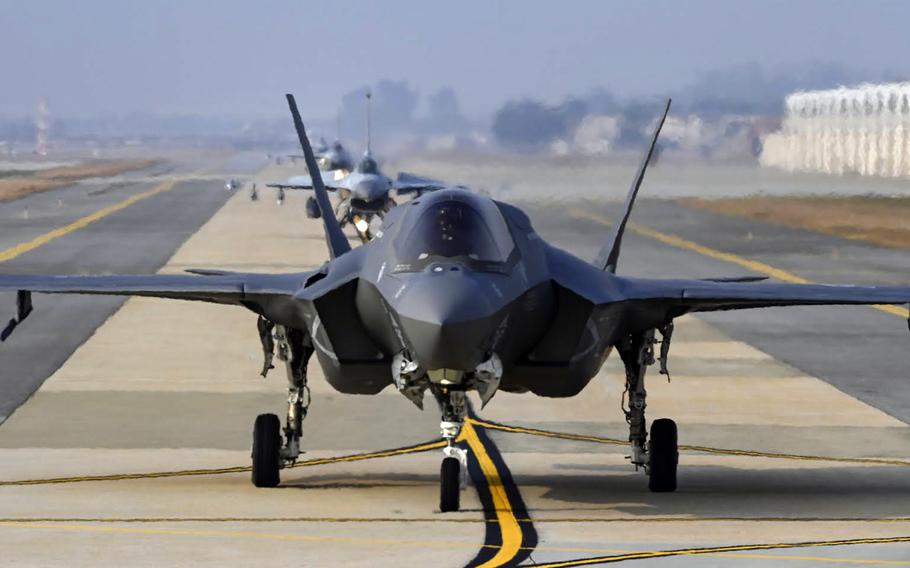 U.S. and South Korean aircraft, including F-35 Lightning IIs and KF-16s, train together during the Vigilant Storm exercise on the Korean Peninsula, Nov. 1, 2022. (South Korean Ministry of National Defense)

OSAN AIR BASE, South Korea — South Korea’s air force on Friday scrambled 80 aircraft after about 180 North Korean warplanes were detected flying in several areas north of the border between the two countries.

The North Korean aircraft were detected between 11 a.m. and 3 p.m., South Korea’s Ministry of National Defense said in a statement on Friday afternoon. North Korean planes flew near the eastern and western coasts of their country and north of a boundary line that the South uses for aerial defense measures, according to the Defense Ministry.

Among the aircraft South Korea sent in response were F-35A Lightning II stealth fighters, according to the Defense Ministry.

The flights come as the United States and South Korea conduct the large-scale Vigilant Storm aerial exercise. Roughly 240 aircraft are participating in the exercise that includes 1,600 sorties.

Vigilant Storm aircraft “maintained a readiness posture” during the North Korean flights, according to the Defense Ministry’s statement.

The exercise, which kicked off Monday, was scheduled to end Friday; however, the U.S. and South Korea extended the drills to at least Saturday after the North fired a volley of ballistic missiles this week.

The North launched six ballistic missiles Thursday and 23 on Wednesday, a one-day record.