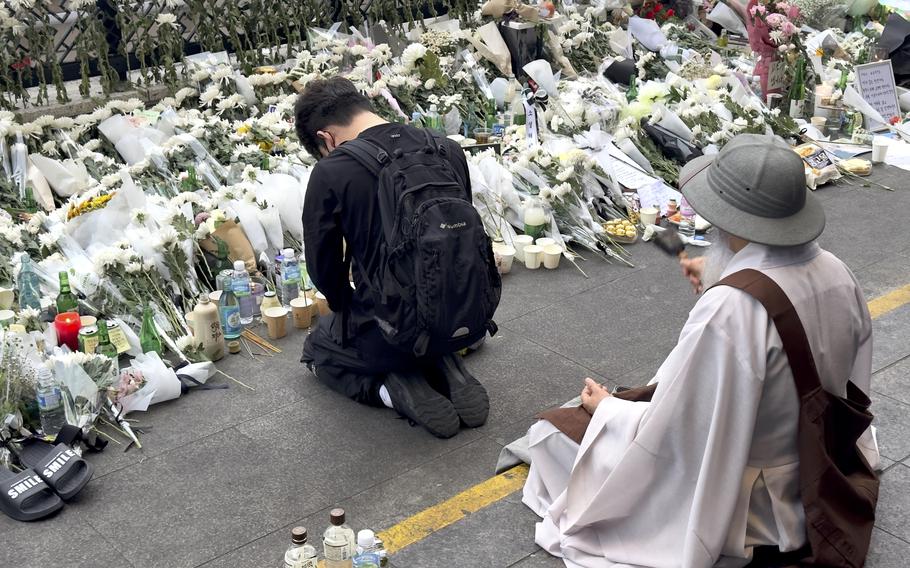 A mourner kneels at a memorial to surge victims in the Itaewon district of Seoul, South Korea, on Oct. 31, 2022. (David Choi/Stars and Stripes)

CAMP HUMPHREYS, South Korea — The U.S military command in South Korea is continuing to count its personnel following the fatal surge in a crowded nightlife area of Seoul that killed more than 150 people on Saturday night.

U.S. Forces Korea began an accountability check of its personnel on Sunday, hours after the deadly surge during Halloween festivities in the Itaewon district, an area of bars, clubs and restaurants near Yongsan Garrison.

The process was still underway Monday, U.S. Forces Korea spokesman Wesley Hayes in an email to Stars and Stripes on Monday morning.

At least 154 people, including 26 foreigners, were killed after thousands of revelers descended into the Itaewon district in Seoul to celebrate Halloween, according to a news release by the South Korean Ministry of the Interior and Safety on Monday. Law enforcement officials said many of the victims were crushed after being trapped in a narrow alleyway.

Two Americans were among the dead, according to the U.S. Embassy in Seoul, which declined to identify them.

Both were university students studying abroad, according to a report Monday in the Washington Post. The Post identified them as Steven Blesi, a student at Kennesaw State University in Georgia, and Anne Gieske, a nursing student at the University of Kentucky.

The embassy advises Americans in Seoul to “avoid the area” in Itaewon and to “contact your family and friends to let them know you are ok.”