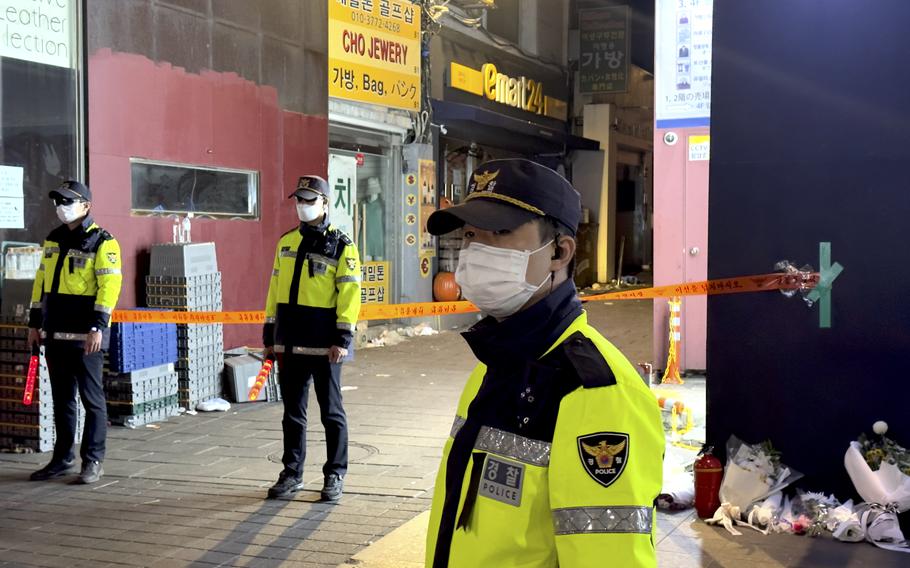 South Korean police guard the entrance to an alleyway where some of over 150 victims were killed after a crowd of people were crushed during Halloween festivities in Itaewon, South Korea, Oct. 31, 2022 . (David Choi/Stars and Stripes)

CAMP HUMPHREYS, South Korea — The U.S. military command in South Korea offered its condolences after a deadly surge in a Seoul nightlife district Saturday evening killed at least 153 Halloween revelers and injured more than 130 others.

A crowd of mostly young people suddenly poured into a narrow, downhill alley in the Itaewon district of the nation’s capital, trapping and crushing many, South Korean emergency officials said at a televised news conference Sunday morning. The area attracted partygoers celebrating one of the biggest outdoor holiday weekends since the start of the COVID-19 pandemic more than two years ago.

At least 20 foreigners died in the crush, including individuals from China, Iran, Uzbekistan and Norway, emergency officials said. Two of the dead are U.S. citizens, the U.S. Embassy in Seoul confirmed in a statement Sunday.

U.S. Forces Korea by noon Sunday had reported no service members missing although a spokesman said units were still counting their personnel. About 28,500 U.S. service members, not including Defense Department civilian employees and families, are stationed in South Korea, most of them at Camp Humphreys, about 50 miles south of Seoul.

The U.S. Eighth Army postponed all remaining Halloween events Sunday and Monday at its bases in South Korea as the country mourns the dead from Saturday night, according to a post on the command's social media accounts. Those events included a haunted house on Sunday and trick-or-treat night Monday at Camp Humphreys.

USKF conducted a "safety and well-being’" accountability recall of all personnel,” spokesman Wesley Hayes said in an email Sunday morning to Stars and Stripes.

The command’s thoughts “are with everyone impacted by last night’s tragic event in Seoul, especially with the families who have lost loved ones and those who were injured,” according to a post on the USFK Twitter account.

“The Itaewon community has opened its arms to us for many years and is part of the reason our alliance is so strong,” the statement said. “During this time of grief, we will be there for you just as you have been there for us.”

Hayes said USFK military police were conducting a routine, courtesy patrol in the area with Korean National Police officers during the incident and assisted with crowd control and first aid.

The U.S. military has deep roots in Itaewon, an area of bars and clubs in Seoul that caters to younger crowds and foreigners. Yongsan Garrison, prior to 2017 the headquarters for USFK and the United Nations Command, is less than a mile from Itaewon. USFK maintains a small contingent at Yongsan but has since moved to Camp Humphreys and in 2019 began handing over the sprawling base to the South Korean government.

The South Korean government in April lifted many of the social-distancing restrictions and business curfews it enacted at the onset of the COVID-19 pandemic in March 2020. Large gatherings like the one Saturday night were prohibited under those restrictions. Approximately 100,000 people gathered in Itaewon for the biggest outdoor Halloween celebration since the pandemic began, Yonhap News reported, citing law enforcement officials.

South Korean President Yoon Suk Yeol, at a news briefing Sunday, said the “disaster … should not have happened” and declared a period of national mourning. Prime Minister Han Duck-soo in a separate briefing an hour later said the mourning period would extend through Saturday.

Yoon ordered an investigation into the incident and said the government would conduct “urgent inspections” into future public events “so that they are conducted in an orderly and safe manner.”

President Joe Biden and First Lady Jill Biden sent their “deepest condolences to the families who lost loved ones” and that the United States “stands with the Republic of Korea during this tragic time,” according to a White House statement. The Republic of Korea is the official name for South Korea.

“We grieve with the people of the Republic of Korea and send our best wishes for a quick recovery to all those who were injured,” according to the statement Sunday.

U.S. Ambassador to South Korea Philip Goldberg in a pair of tweets described the incident as a “tragic loss of life” and said the U.S. flag at the embassy in Seoul will at half-staff “out of sorrow and respect to the Korean people.”

This catastrophe marks the worst loss of life from a single incident in South Korea since a ferry capsized off the southwestern coast in 2014, killing 304 people, the majority of them high school students.