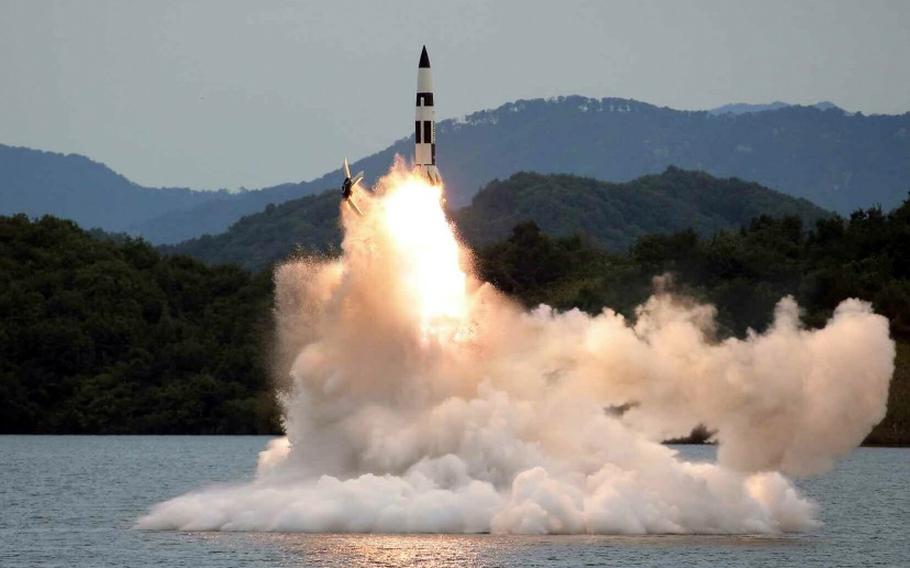 North Korea launches a missile from a submarine in this image released by the state-run Korean Central News Agency on Oct. 10, 2022. (KCNA)

(Tribune News Service) — North Korea has fired over 40 missiles this year, more than during any year since its leader, Kim Jong Un, took power in 2011. Last week it launched a short-range ballistic missile toward its eastern waters and flew warplanes near the border with South Korea.

On Oct. 3 a North Korean ballistic missile flew an estimated 2,850 miles, the farthest a North Korean missile has flown yet — soaring over Japan before landing in the Pacific Ocean. North Korea hadn’t launched a missile over Japan in five years.

In response to news of the launch, the Hawaii Emergency Management Agency tweeted that “authorities in Japan alerted the public and advised they take shelter. At this time NO threat to Hawai’i is anticipated.”

Hawaii is the nerve center of all U.S. military operations in the region, serving as the headquarters of both INDOPACOM and the U.S. Pacific Fleet. Missile defense strategy for the Pacific has been debated by key military leaders in Hawaii and Guam and by U.S. policymakers.

Analysts have estimated that if North Korea were to fire missiles at Hawaii, they would hit the islands about 20 minutes after being fired. New submarine-based missiles could potentially get even closer.

During a multinational naval exercise in Hawaii in August, a Navy Arleigh Burke-class destroyer used its Aegis Combat System to practice shooting down ballistic missiles. In a news release the U.S. military said the “ballistic missile search and tracking exercise demonstrated the commitment of the U.S., (South Korea), and Japan to furthering trilateral cooperation to respond to (North Korean) challenges, protecting shared security and prosperity, and bolstering the rules-based international order.”

The issue of Pyongyang’s missile program was heightened in Hawaii in January 2018 when HI-EMA sent out a false-alarm missile alert to phones across the state. The alert came during tensions as Kim and then-President Donald Trump traded threats and insults, with Trump boasting he would unleash “fire and fury “ on the Korean Peninsula.

“It caused significant personal concern and recalculation of people’s risks about living here,” said James Minnich, a retired Army officer and professor at the Daniel K. Inouye Asia-Pacific Center for Security Studies in Waikiki. “It’s not healthy for people. It’s not good for the political makeup of the islands to have people feel like they’re living under a risk of a threat of attack by North Korea or any other state, which is why diplomacy is of course important.”

Launches escalate In just the past two months, North Korea has fired more than a dozen missiles. The most recent flurry of missile tests coincides with fears of further escalation in the war in Ukraine and increased tension between China and Taiwan. They also come as Kim and Yoon test each other’s limits.

But Minnich said the latest tests, though significant, were also expected, and follow a steady path as the Kim regime pursues its long-term strategic goals.

“The only constant has been North Korea’s development of its capability, which has created a situation now where a threat which was once localized on the Korean Peninsula extends to the region and beyond, particularly to the U.S. homeland,“ said Minnich. “These are credible threats that are only increasing over time.”

In September 2021, North Korea tested its first hypersonic missile, the Hwasong-8, launching four of them. In May the South Korean military said it detected a ballistic missile launch that it thinks was fired from a North Korean submarine in waters near the port city of Sinpo, where North Korea has a major shipyard that builds submarines.

The U.S. military’s Oahu-­based Indo-Pacific Command said in a statement that while the apparent submarine-based launch did not pose an immediate threat, it demonstrated “the destabilizing impact of the (North Korean) illicit weapons program “ and that “the U.S. commitment to the defense of the Republic of Korea and Japan remains ironclad.”

Many analysts think this year’s missile launches will culminate in a nuclear test. North Korea detonated its first nuclear warhead in 2006 and has conducted six tests, most recently in 2017.

Skirting sanctions North Korea has faced economic sanctions over its continued development of nuclear weapons in defiance of the United Nations. Nevertheless, sanctions have not slowed the development of Pyongyang’s increasingly sophisticated weapons program. North Korea has turned increasingly to smuggling and has used hackers to steal funds from businesses and institutions around the globe to bypass sanctions and continue financing its programs.

While Pyongyang shows no indication it will give up its nukes, some analysts have suggested lifting some sanctions in exchange for North Korea pausing its testing and development and granting international inspectors access to them.

Minnich said that while sanctions have isolated North Korea economically, they have mostly affected ordinary people rather than the country’s elite and that weapons development as well as North Korea’s emergence as a cybercrime hub appear to have accelerated under sanctions. “The hope is somehow as those without means suffer, somehow they’ll force the government to change,“ he said. “There’s not a whole lot of evidence that that occurs.”

Under Moon Jae-In, Seoul sought a more conciliatory relationship with the North and successfully reached an agreement to formally end the Korean War — which ended in an armistice rather than a formal peace agreement. But Yoon, who took office in May amid this year’s spate of missile launches, has taken a much tougher stance.

During his campaign Yoon said he would explore the redeployment U.S. tactical nuclear missiles to the peninsula that were withdrawn during the 1990s, though Biden administration officials ruled out the possibility.

Nevertheless, South Korean public opinion has shifted as frustration with Pyongyang’s weapons program mounts. A poll conducted by the Chicago Council on Global Affairs in February found that as many as 71% of South Koreans now favor their country acquiring its own nuclear weapons to deter the North.

Nuclear declaration North Korea in September passed a new law declaring the country a nuclear weapons state and laid out its strike policies. Among the policies are that any attempt to remove Kim from power would prompt a nuclear strike “automatically and immediately.” Kim called the country’s nuclear status “irreversible “ and ruled out any further talks on denuclearization.

“North Korea views itself as a small great power,” said Minnich, noting that its successful development of nuclear warheads, long-range missiles and satellite systems put it in a league that only a handful of other nations can compete with. “When they make movements on the international stage, the whole world watches. That doesn’t happen with small countries.”

Minnich said both sides have credible fears but that recent policy shifts also create opportunities for misunderstandings that could spark the very escalations both seek to avoid. “We kind of rely upon (the idea) that North Korea will correctly interpret a military strategic situation that is occurring,“ he said. “We expect them to either believe what we say or to interpret it the same way (we do ). That can be rather dangerous.”

But diplomacy has proved challenging.

From 2003 until 2009 both Koreas, the U.S., China, Russia and Japan engaged in so-called Six Party Talks aimed at cooling tensions on the peninsula. At that time Russia and China shared many of the other parties’ concerns about North Korea’s nuclear program. But a series of clashes between the North and South Korean militaries brought talks to a halt, and several subsequent efforts to restart talks proved unsuccessful.

Moon Chung-in said deterioration of relations between the U.S. and China and Russia has only further complicated matters. Neither China nor Russia is cooperating with the U.S. on talks with North Korea.

However, some U.S. officials think China may be exerting pressure on North Korea to hold off on its seventh nuclear test — at least for now.

North Korea, China and Russia have increasingly tightened their relationship since Russia’s February push into western Ukraine. Russia and North Korea have stepped up both military and industrial cooperation as successive sanctions have further isolated the two countries from the global economy.

Honolulu Star-Advertiser reporter Kevin Knodell participated in the East-West Center’s 2022 Korea-United States Journalists Exchange. Through the fellowship, he reported on this story in both South Korea and Hawaii.