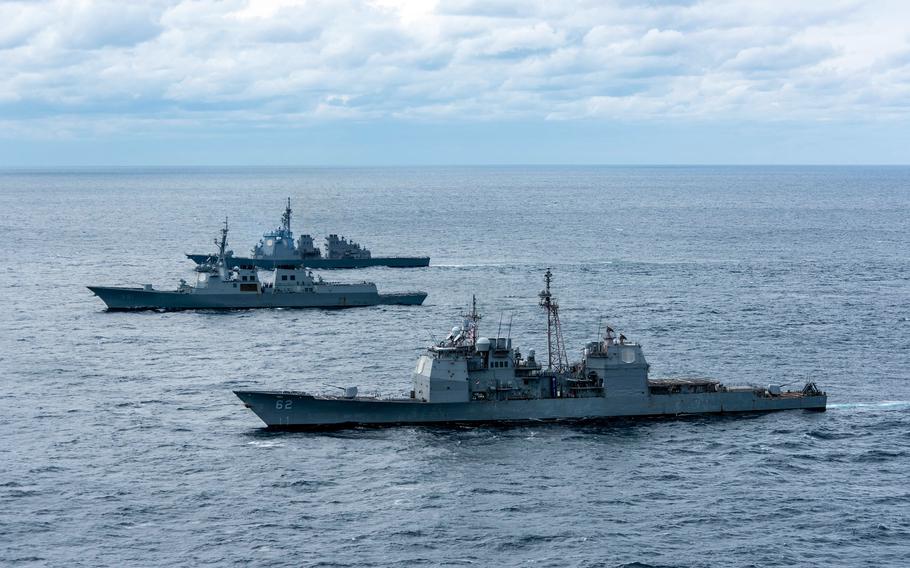 Warships from the United States, Japan and South Korea commenced a ballistic missile defense exercise Thursday in the Sea of Japan, also known as the East Sea, according to U.S. Indo-Pacific Command.

The drills came the same day North Korea fired a pair of short-range ballistic missiles off its eastern coast and two days after it launched an intermediate-range weapon over Japan.

South Korea’s Joint Chiefs of Staff announced Wednesday that the nuclear-powered aircraft carrier USS Ronald Reagan and its strike group would redeploy to the South’s eastern coast due to an uptick in North Korean activity. The group had made a port call in and around Busan on Sept. 23.

North Korea, known formally as the Democratic People’s Republic of Korea, or DPRK, has launched roughly 40 missiles so far this year, a record.

The exercise on Thursday was intended to demonstrate “the strength of the trilateral relationship with our Japan and [South Korea] allies, which is forward-leaning, reflective of our shared values, and resolute against those who challenge regional stability,” the release said.

The three nations carried out trilateral anti-submarine warfare drills in waters between Japan and the Korean Peninsula late last month “to cope with the North Korean nuclear and missile threat,” South Korea’s Ministry of National Defense said in a news release on Sept. 29.