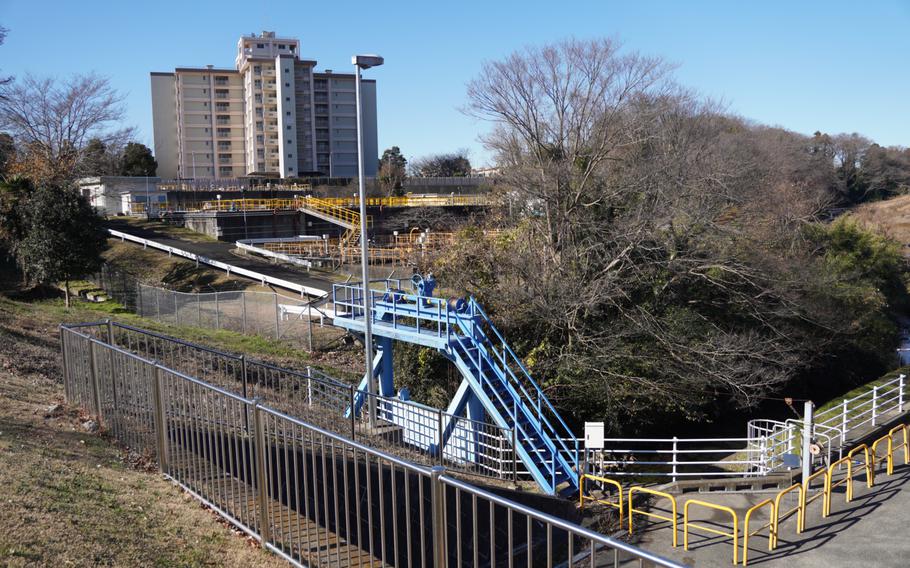 Japanese government officials surveyed water treatment facilities at Naval Air Facility Atsugi on Monday, three months after toxic organic compounds were released into a waterway on the base.

A heavy rain at Atsugi on Sept. 24 caused a hangar control panel to malfunction, causing the release of organic fluorine compounds known as PFAS into a small stream that runs through the base 26 miles southwest of Tokyo, according to a Monday news release from Kanagawa prefecture and an official in the prefecture’s environmental division. Both sources cited unnamed U.S. military officials as the source of the information.

Some Japanese government officials are required to speak to speak to the media only on condition of anonymity.

PFAS, which includes the chemicals PFOS and PFOA, is found in firefighting foam, aircraft grease, water-repellent materials and other products that use fluorine chemicals. Studies involving lab animals show exposure to the chemicals can increase the risk of certain tumors, according to the American Cancer Society. PFOS and PFOA are called “forever chemicals” by the U.S. Environmental Protection Agency because they persist without breaking down in the environment.

Studies involving human exposure show an increased risk of cancer, reproductive issues, developmental issues in children and other adverse health effects, according to the EPA.

The September incident led to the discharge of water contaminated with fire extinguishing foam, according to the news release. The survey, which included representatives from Japan’s national government, Kanagawa prefecture and the cities of Yamato and Ayase, included an inspection of the hangar and a nearby retention basin.

Naval Forces Japan confirmed the incident, but said it is still investigating the cause of the contamination, according to spokeswoman Cmdr. Katie Cerezo.

“We care deeply about the safety and health of every person, and are committed to the care and preservation of the environment,” Cerezo said Tuesday by email to Stars and Stripes.

U.S. officials explained the cause of the incident and the preventative measures taken, including the removal of fire extinguishers that use the chemicals and the installation of a granular activated carbon filter, the Kanagawa official told Stars and Stripes by phone Tuesday.

On Thursday, Yokosuka city officials and Japanese government representatives also surveyed Yokosuka Naval Base, 33 miles south of Tokyo, which detected high concentrations of PFOA in its industrial wastewater on Sept. 29, according to a Yokosuka city news release that day.

The survey included an examination of Yokosuka’s new granular activated carbon filter – a model identical to the one installed at Atsugi - and reviewed the most recent water sampling results. The last sample, taken Nov. 18, showed PFAS levels below Japan’s provisional target value, according to the release. Cerezo confirmed the results, adding that the chemicals are at “non-quantifiable” levels.

Tests by the U.S. Navy and the South Kanto Defense Bureau in May discovered PFAS in wastewater from Yokosuka Naval Base. The chemicals repeatedly showed up again in follow-up tests throughout the year.

The base immediately removed all firefighting foam containing the chemicals immediately after the contamination was discovered in May, Cerezo told Stars and Stripes on Sept. 16. The water filter installed Nov. 1 was another counteractive measure taken by the base, she said.

Concerns about the chemicals have been raised elsewhere in Japan. An Okinawa civic group, Liaison to Protect the Lives of Citizens Against PFAS Contamination, released survey results on Oct. 15 that found PFOS in blood samples at 1.5 to 3.1 times higher than a Japanese government survey last year.

The group believes U.S. military bases on the island prefecture could be the source of contamination and called for their cooperation, group spokesman Toshio Takahashi said Oct. 17.