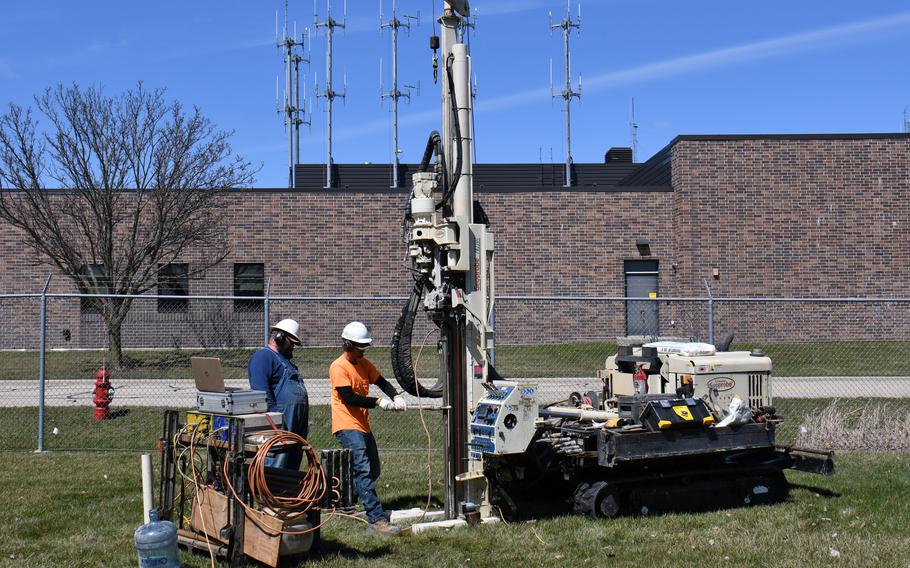 Drillers with Plains Environmental Services, Inc., conduct testing using a mobile drilling rig during a remedial investigation into the presence of per- and polyfluoroalkyl substances on March 22, 2022, at Truax Field, an Air National Guard installation in Madison, Wis. (Paul Gorman/U.S. Air National Guard)

The Defense Department miscounted the number of troops and their family members impacted by contaminated drinking water at military bases by hundreds of thousands, according to an analysis by an environmental advocacy group released Thursday.

The Environmental Working Group, a nonprofit group based in Washington that specializes in research and advocacy in agricultural subsidies, toxic chemicals, drinking water pollutants, and corporate accountability, analyzed a Pentagon report in April that found about 175,000 service members and their families lived at 24 military installations around the world where drinking water was contaminated with dangerous levels of toxic “forever chemicals.”

Per- and polyfluoroalkyl substances, or PFAS, are known as forever chemicals because they build up in human bodies and never break down in the environment. The national Centers for Disease Control and Prevention states human health effects are uncertain, though some research has linked them to an increased risk for cancer, reproductive and immune system harm, and other diseases.

The EWG analysis concluded the chemicals can be found at 116 military bases worldwide with about 640,000 people drinking contaminated water annually.

“The number of service members served contaminated water may be even greater than EWG’s estimate, which relies on a review of publicly reported water system tests and DOD records,” the group said in a news release.

The group’s findings show higher numbers of affected people at military bases, in part, because two months after the Pentagon report was released the Environmental Protection Agency announced a new standard of what is an acceptable, safe amount of the chemicals in drinking water.

Jared Hayes, author of the EWG report and a policy analyst for the group, said he conducted the analysis to see how clean the drinking water is based on the new standard.

The EPA in June issued new advisories for the risk level of PFAS in water from 70 parts per trillion to less than one part per trillion based on new science and consideration of lifetime exposure. The previous level had been set in 2016 and is what the Pentagon used in creating its report in April.

However, the Pentagon also failed to include the transient nature of military base populations in its estimate. Instead, its report only captures the population of a base at one time, according to EWG’s analysis.

The Defense Department report in April also did not include drinking water purchased by service members from local water utilities or private on-base water systems, which might also have been contaminated with the chemicals, according to the environmental group.

The Defense Department wrote the report to satisfy a requirement of the fiscal 2019 National Defense Authorization Act, an annual bill that outlines defense priorities and spending.

The chemicals were previously used at military bases in firefighting foam, which is the main cause of contaminated water supplies in communities worldwide, including military bases.

“Neither estimate — EWG’s 640,000 people or the DOD's 175,000 — reflects the true number of service members that were exposed to PFAS at these bases over the 50-year period when [Aqueous Film Forming Foam], the firefighting foam made with PFAS, was in use,” Hayes said.

Lt. Cmdr. Tim Gorman, a Pentagon spokesman, said in response to the environmental group’s report that the Defense Department “has prioritized and addressed all known drinking water exposures over the EPA 2016 health advisories on our installations and in the surrounding communities in which we serve.”

He said the Pentagon expects new EPA standards for the chemicals by the end of this year, and officials are reviewing data and taking additional sampling as needed to prepare to incorporate the changes.

The Defense Department is required to follow federal cleanup laws for PFAS and the department is committed to doing so, he said.

“PFAS is a complex issue and one that requires simultaneous attention and action from multiple stakeholders across multiple disciplines. The department coordinates with several federal and state agencies and involves local communities as it works to address PFAS under our cleanup program,” Gorman said.