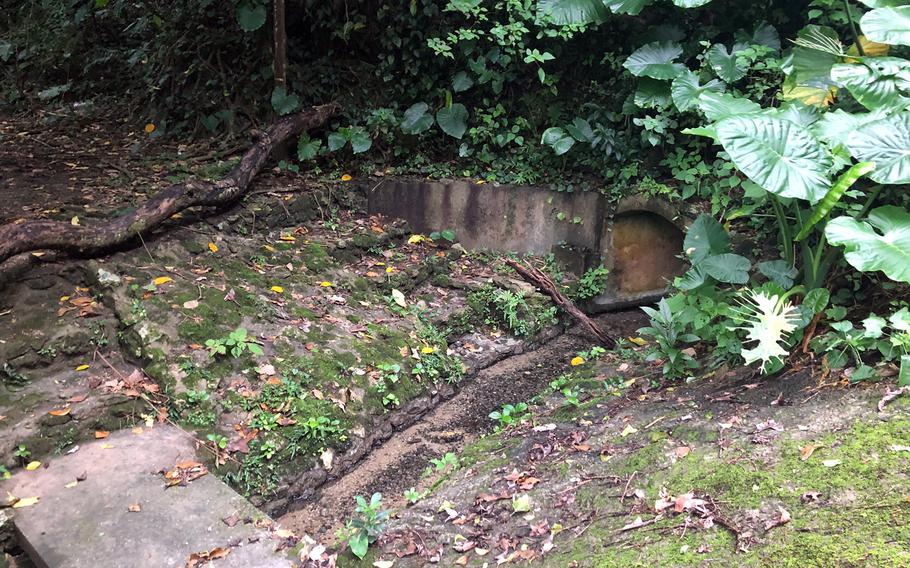 Okinawa prefecture sampled 46 sites surrounding U.S. military installations between July and September as part of a biannual groundwater survey, according to a Dec. 1, 2022, statement from the environmental division. (Keishi Koja/Stars and Stripes)

The division requested base access for further testing, the official told Stars and Stripes on Monday.

The prefecture sampled 46 sites surrounding U.S. military installations between July and September as part of a biannual groundwater survey, according to a Dec. 1 statement from the environmental division.

Of the sites sampled, 32 exceeded Japan’s provisional safe drinking water standard of 0.05 micrograms per liter, according to data released with the statement.

Yara Hijaga spring, approximately 1,500 feet from the northern fence line at Kadena Air Base, registered the highest levels of a combined PFOS and PFOA mixture, 2.1 micrograms per liter – 42 times the provisional safety standard.

“We think that the contamination comes from the U.S. bases,” the division spokesman told Stars and Stripes by phone Monday.

PFAS – manmade per-and polyfluoroalkyl substances – are chemicals used to make coatings and products that resist heat, oil, stains, grease and water, according to the Centers for Disease Control and Prevention website. It’s also found in firefighting foam commonly used at U.S. military bases. PFOS and PFOA are examples of PFAS.

The U.S. Environmental Protection Agency updated its health advisories in June to say no level of PFOS or PFOA in drinking water is safe. The synthetic compounds accumulate in the body over time, according to the agency.

Studies involving lab animals show exposure to PFOA increases the risk of certain tumors of the liver, testicles, breasts and pancreas, according to the American Cancer Society.

In August, the prefecture asked the Okinawa Defense Bureau; Lt. Gen. James Bierman Jr., the commander of III Marine Expeditionary Force; and the U.S. Consulate General in Naha for access to MCAS Futenma, Kadena and Camp Hansen, a Marine base, to take water samples, the spokesman said. The prefecture has not yet received a response, the division spokesman said Monday.

III MEF did not respond to emailed questions regarding on-base access from Stars and Stripes on Tuesday.

The 18th Wing at Kadena on Tuesday referred Stars and Stripes to U.S. Forces Japan, which said that day in an unattributed statement it was not able to comment on the test results. By Thursday, USFJ had not responded to subsequent inquiries made Tuesday about on-base sampling and the use of firefighting foam at Okinawa bases.

Okinawa prefecture has been sampling sites around U.S. bases twice a year since 2017, after high levels of PFOS were detected in 2016, the environmental division statement said.

The groundwater sampling this year concentrated on areas surrounding MCAS Futenma, Kadena and Hansen, as well as Camps Foster and McTureous, according to the environment division statement.

The highest combined levels around MCAS Futenma came from Aranakigaa, which registered 1.4 micrograms per liter, 28 times the provisional standard. Aranakigaa is a spring downstream from the base and about a quarter-mile from its western fence line.