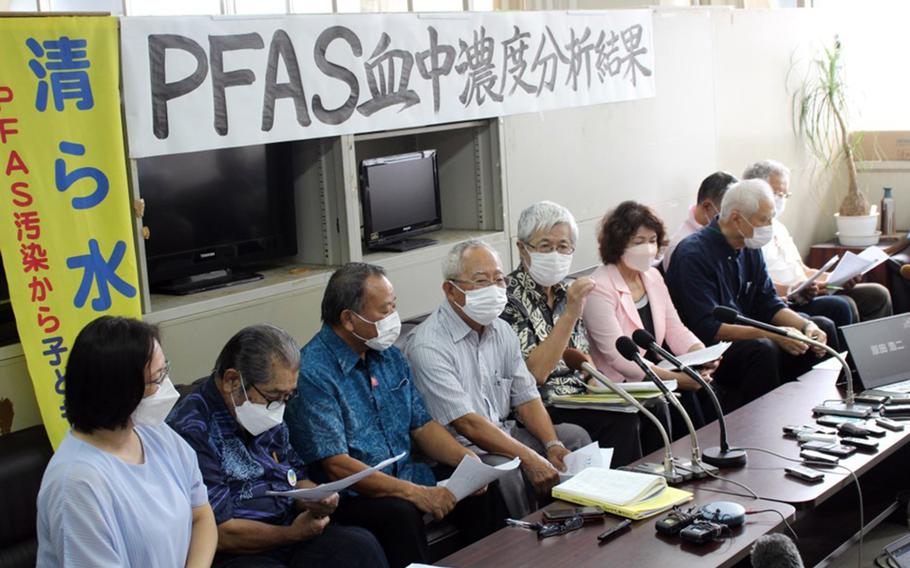 Members of Liaison to Protect the Lives of Citizens Against PFAS Contamination speak to reporters in Naha, Okinawa, Oct. 15, 2022. (Toshio Takahashi)

CAMP FOSTER, Okinawa – A Japanese cabinet minister has promised to investigate claims made by an Okinawan civic group that high levels of synthetic toxins were detected in the blood of locals living near U.S. military installations.

The Ministry of the Environment will cooperate with municipalities on Okinawa, where the group said it took the measurements, and gather information needed to consider mitigation measures, Environment Minister Akihiro Nishimura said Tuesday in a video posted on the ministry’s website.

The announcement comes after the group – Liaison to Protect the Lives of Citizens Against PFAS Contamination – declared that the blood samples showed PFOS levels were 1.5 to 3.1 times higher than a government of Japan survey found last year. The group announced its results Saturday.

PFAS, or per-and polyfluoroalkyl substances, are chemicals used to make "fluoropolymer coatings and products that resist heat, oil, stains, grease, and water," according to the Centers for Disease Control and Prevention website. They include the subgroups PFOS and PFOA.

Japan does not set standards for safe bloodstream levels of PFOS, according to an expert, but the group said its samples showed levels that, in some cases, exceeded European standards.

Nishimura said he had not reviewed the group’s claims but said the ministry advises the public not to use or drink water that exceeds 0.05 micrograms of PFOS per liter, Japan’s recommended safe threshold. 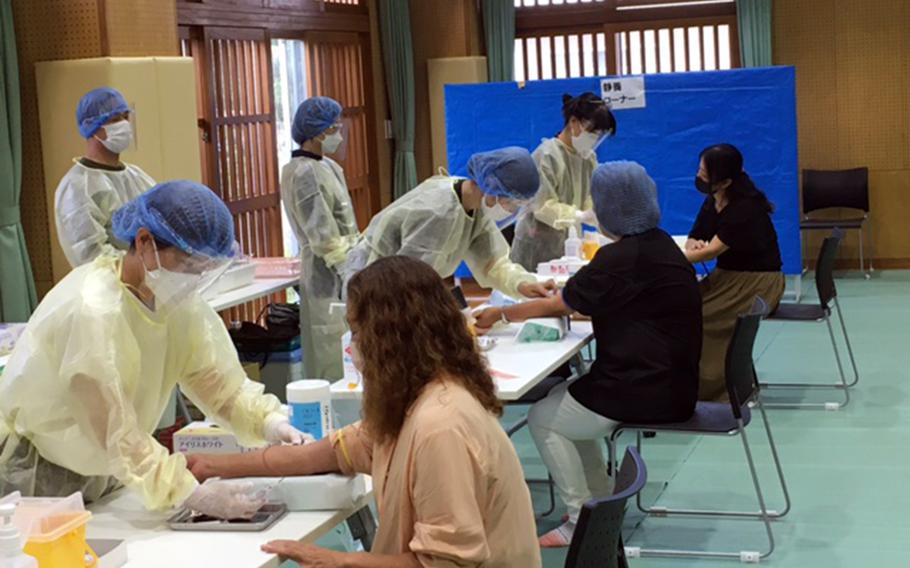 Blood samples are taken on behalf of Liaison to Protect the Lives of Citizens Against PFAS Contamination, at a community center in Ginowan, Okinawa, July 10, 2022. (Toshio Takahashi)

The group believes U.S. military bases on Okinawa could be to blame for the pollution and has called for their cooperation in any investigation, group spokesman Toshio Takahashi, 69, told Stars and Stripes by phone Monday.

U.S. Forces Japan public affairs said in a statement Thursday that the command’s “highest priority is the health and safety of our communities, including our service members, their families, and those that live and work near military installations.”

“We are aware of the recent survey by a private organization regarding PFOS levels,” said the statement emailed by USFJ spokesman Col. Greg Hignite. “We are committed to the well-being of those that live on and near our bases and will continue to coordinate with the Government of Japan to ensure we remain compliant with our international obligations and serve as good stewards of the environment. The U.S. Forces Japan engineer team regularly consults with their counterparts in the Government of Japan and will continue doing so."

PFOS and PFOA are found in firefighting foam, aircraft grease, water-repellant materials and fluorine chemicals. Studies involving lab animals show exposure to PFOA increases the risk of certain tumors of the liver, testicles, breasts and pancreas, according to the American Cancer Society.

High levels of the of the contaminants have been detected in wells outside Marine Corps Air Station Futenma in Ginowan city, Kadena Air Base in Kadena town and Camp Hansen in Kin town.

The U.S. Environmental Protection Agency updated its health advisories in June to say there is no safe level of PFOS or PFOA in drinking water. The synthetic compounds accumulate in the body over time, the agency statement said.

The citizens’ group in June and July sampled the blood of 387 people in six municipalities, Takahashi said.

Japan does not set safe levels for PFOS or PFOA detected in the blood, Kouji Harada, an associate professor of health and environmental sciences at Kyoto University, said by phone Tuesday.

In Germany, PFOS levels over 20 nanograms per milliliter are considered dangerous, he said. Harada said he analyzed the data collected by the Okinawan group and approximately 10% of those surveyed exceeded the German standard. The testing was performed by medical professionals and satisfied scientific standards set by the U.S. government, so Harada was confident in the accuracy of the results, he said.

The highest samples from Kadena town, Okinawa city, Ginowan city and Chatan town measured above the German standard for PFOS, according to data provided to Stars and Stripes by the group.

“We must worry about future lifestyle-related illnesses,” Harada said.