Testing finds PFOS, PFOA in excessive levels at US Navy base in Japan 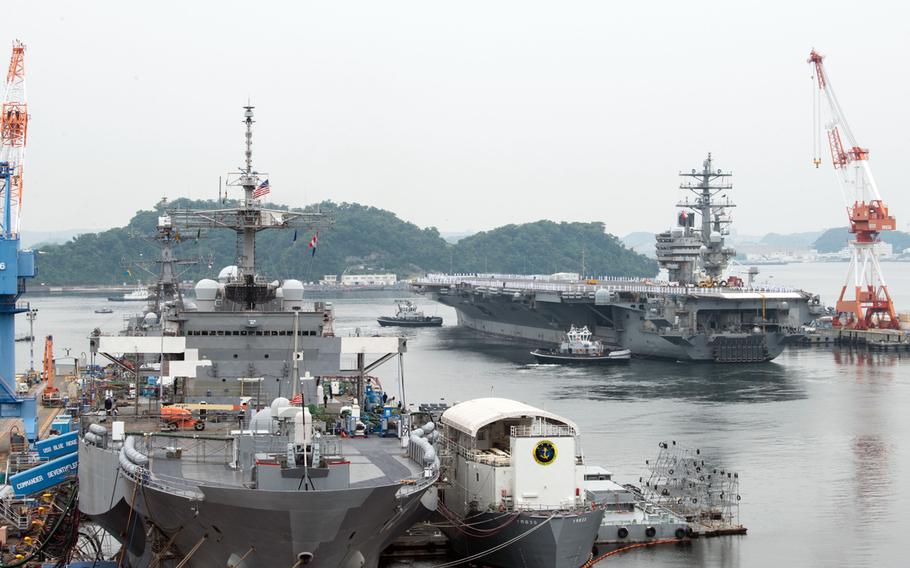 YOKOSUKA NAVAL BASE, Japan — Two rounds of tests in June and July confirmed the presence of toxic organic compounds in wastewater from this base’s treatment facility, according to the city of Yokosuka.

Levels of PFOS and PFOA in samples of discharged water in July exceeded the limit — 50 parts per trillion — imposed by the Japanese government, according to the news release.

U.S. Forces Japan, under the bilateral agreement Japan Environmental Governing Standards, has a 50 parts per trillion limit on drinking water but no established limit for wastewater.

Samples taken by the U.S. military on July 6 found combined concentrations of 15 parts per trillion at the entrance of the treatment plant and 112 parts per trillion in samples from the plant’s discharged water, according to the release.

Tests in May first showed that an “unusual foam” at the treatment plant contained trace levels of PFOA and PFOS.

Yokosuka Mayor Katsuaki Kamiji on Sept. 12 expressed concerns with the June and July results during a video conference with base officials and urged them to take corrective measures as soon as possible.

"We cannot help to believe that the discharging of more-than-standard value of PFOS and such from the base has become continuous," he said, according to the release.

PFOS and PFOA are found in firefighting foam, aircraft grease, water-repellent materials and other products that use fluorine chemicals. Studies involving lab animals show exposure to PFOA increases the risk of certain tumors, according to the American Cancer Society.

Studies involving human exposure to the chemicals show that in some cases it can lead to reproductive issues, developmental issues in children, increase risk of cancer and other health effects, according to a March 16 news release from the U.S. Environmental Protection Agency.

Since discovering the two toxins in its wastewater, the base has removed all firefighting foam containing the chemicals and is installing a granular activated carbon filter, according to Cmdr. Katie Cerezo, spokeswoman for Naval Forces Japan.

“We will continue to sample the wastewater plant regularly until the cause has been identified and resolved,” she said in an email Thursday. “We are committed to protecting the safety and health of the community and the environment and will continue our efforts to identify the cause of the release.”

The base most recently tested the wastewater on Aug. 29 and will continue to work “within the established process” between the two governments to release the results, Cerezo said.