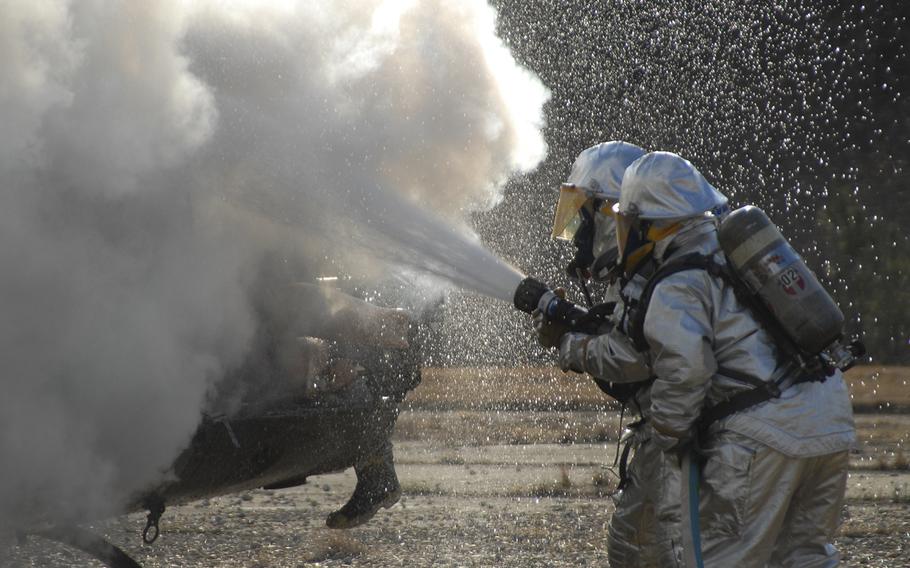 Firefighters extinguish a helicopter fire during a training exercise in 2007. Firefighting foam is among the many PFAS products that has been used for decades. ( U.S. Army)

For decades, Sandy Wynn-Stelt looked at the Christmas tree farm across the street from her home in western Michigan with delight. "How idyllic is that," she said. "That's about as quintessential Michigan as you could get."

Only in recent years did she learn of the toxic "time bomb that nobody knew was sitting" on the land underneath those trees.

Her town of Belmont is one of hundreds across the country contaminated with an omnipresent batch of dangerous chemicals known as polyfluoroalkyl and perfluoroalkyl substances, or PFAS. On Friday, the Biden administration proposed to classify two of the most common of these chemical compounds, which can persist in the environment for years, as hazardous substances.

The long-awaited move from the Environmental Protection Agency is meant to spark the cleanup of scores of sites defiled by industrial compounds and make the public more aware of their presence. Used to make everyday products like nonstick cookware, cosmetics, fabrics and food packaging, these types of chemicals pervade drinking water used by millions of Americans - and they've been linked to an array of illnesses, including cardiovascular problems and low birth weights.

"It's a very significant step," EPA Administrator Michael Regan said in a phone interview. The proposed rule "requires the polluter to pay for violating the law."

Still, people living near toxic waste and their advocates say the federal government under multiple administrations has been painfully slow to act, even as the health risks of PFAS become ever clearer.

The agency is proposing to add two chemicals known as PFOA and PFOS to its official list of hazardous substances under the federal Superfund program, which cleans up toxic waste sites. The listing will make it easier for the federal government to compel polluters to pay to restore contaminated sites and funnel taxpayer money into projects if the culprits cannot be found.

Under the proposed rule, companies will need to report when the substances leach into the environment, even in relatively small quantities. The requirements will help public health officials track where the chemicals persist.

"Transparency and disclosure are critical in this process," Regan said. "And so, this rule will do that."

Industry representatives argued that listing the two chemicals as hazardous and involving the federal government in more cleanups could complicate them.

The EPA decision is "an expensive, ineffective and unworkable means to achieve remediation for these chemicals," the American Chemistry Council, a trade group representing chemical makers, said in a statement.

For decades, manufactures prized PFAS for their durability. With tough fluorine-carbon bonds, the compounds were used to make water-repellent clothing, firefighting foam and a variety of other products.

But that resilience proved dangerous. The fluorinated substances break down slowly, allowing them to build up in water, soil and people's bodies. Even some rainwater is tainted with PFAS at dangerously high levels, according to one recent study. When contamination is found, the sturdy chemicals are difficult to remove and destroy. Some have dubbed them "forever chemicals."

Among the most contaminated sites are areas outside military bases where airmen used flame retardants to quench jet-fuel fires. Under the EPA's proposal, the military would need to take into account state laws when cleaning up PFOA and PFOS waste.

In Michigan, the footwear maker Wolverine Worldwide dumped waste on the property eventually used to grow Christmas trees, said Wynn-Stelt, a psychologist who began advocating on the issue of PFAS after learning about the contamination near her home. Forever chemicals turned up in the drinking water from her private well and, eventually, her blood. She worries the exposure may have contributed to her husband's death from liver cancer in 2016 as well as to her own diagnosis with thyroid cancer four years later.

Today, under a consent decree with the state, the company is planning to install specially engineered membranes over portions of the property.

But Wynn-Stelt worries the plan isn't enough, and would still like to see the federal government step in. "Our state is going to go broke if it has to clean up PFOA and PFOS by itself," she said.

Though many sites remain contaminated with those two chemicals, manufactures have largely phased out their use of both. Thousands of other varieties of forever chemicals remain unaddressed.

Melanie Benesh, vice president for government affairs at the Environmental Working Group, an advocacy organization, called the EPA's move Friday "very significant" but cautioned that the rule alone won't keep PFAS out of the manufacturing process.

"Just naming something as a hazardous substance doesn't really affect use," she said.

Many chemists outside of government are racing to figure out ways of disposing of PFAS safely. In a paper published this month in the journal Science, a group of researchers outlined a cheap way of unzipping those sturdy fluorine-carbon bonds in some compounds.

Friday's announcement is the latest effort from an administration contending with widespread contamination from these chemicals.

This spring, the EPA issued new health advisories for PFOA and PFOS. This fall, the agency is planning to propose the first mandatory drinking-water standards for PFAS.

"This is one of these issues that isn't Republican or Democrat," Regan said. "This is a bipartisan issue that many members on both sides of the aisle at all levels of government have asked EPA to step in and take a leadership role."