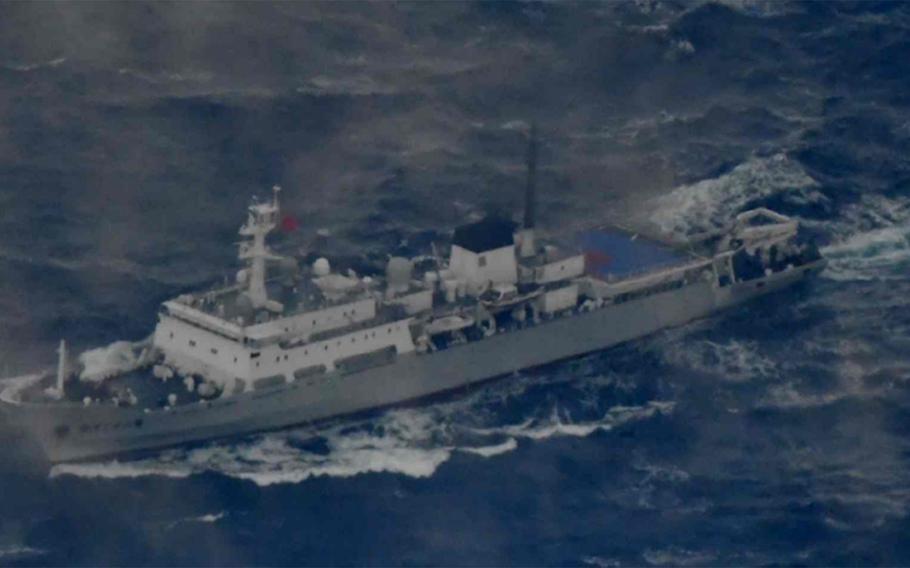 The alleged intrusion capped several days of Chinese military exercises in the waters surrounding the southern island prefecture of Okinawa, according to Japan’s Ministry of Defense.

A Chinese navy Shupang-class survey vessel around 6:50 a.m. Monday entered Japan’s territorial waters south of Yakushima, an island about 40 miles south of Kyushu, the southernmost of Japan’s four main islands, according to statement posted Monday on the Defense Ministry website. The survey vessel steamed west past Kuchinoerabu Island and exited territorial waters around 10:30 a.m., according to the ministry.

Japan’s Foreign Affairs Ministry protested the action with the Chinese embassy in Japan and with the Chinese government in Beijing, a foreign ministry spokesman told Stars and Stripes by phone on Tuesday.

“We expressed our strong concern on the moves of the Chinese naval ships around our country through diplomatic channels,” Japan’s Chief Cabinet Secretary, Hirokazu Matsuno, said Monday during a regularly scheduled press conference at Prime Minister Fumio Kishida’s office in Tokyo.

Even warships of one country are permitted “innocent passage” through another country’s territorial waters under the U.N. Convention on the Law of the Sea. The convention spells out exceptions to the rule.

Matsuno declined to comment on the vessel’s purpose but said China had been raising tensions in the region through increased activity.

The intrusion follows several days of Chinese exercises that took place between Okinawa and Miyako Island, 175 miles to the southwest, according to a statement by Japan’s Joint Staff on its website Sunday.

A flotilla of six Chinese warships, including the aircraft carrier Liaoning, a frigate, three destroyers and a fast combat support ship were spotted in the region between Thursday and Saturday. They traversed the Miyako Strait on Friday and practiced carrier landings the following day, according to the Joint Staff.

The Japan Maritime Self-Defense Force launched the JS Kirisame from Sasebo Naval Base, a P-1 patrol plane from Atsugi Naval Air Facility and a P-3C surveillance plane from Naha, Okinawa, as well as fighters, to gather information, the statement said.

China routinely sends warships and aircraft through the straits between Japanese islands, even as it objects to foreign naval vessels transiting the Taiwan Strait. All are considered international waters.

Japan Air Self-Defense Force fighters from Naha scrambled Monday afternoon to intercept a pair of Chinese H-6 bombers that passed between Okinawa and Miyako, according to a statement on the Joint Staff website that day. The bombers flew from the East China Sea to the Pacific and back again but did not enter Japan’s air space.

The intrusion into Japan’s territorial waters was the ninth this year and the first since November, according to a post on the Defense Ministry’s official Twitter account Monday.

The survey vessel was first spotted westbound about 30 miles southeast of Tanegashima by the Japan Maritime Self-Defense Force around 3:20 a.m. Monday, according to the ministry. It entered Japan’s contiguous zone south of Tanegashima and then Japan’s territorial waters south of Yakushima.

Nations may act to prevent further intrusion or illegal activity in their territorial waters but exert limited control in their contiguous zones.

The Defense Ministry vowed to “protect Japan’s territory, territorial waters, and airspace,” according to its tweet.