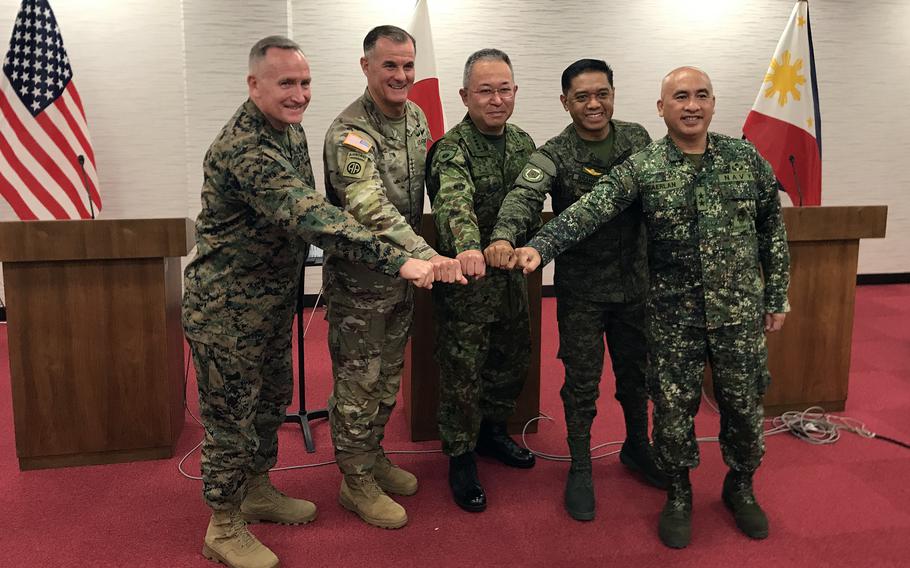 CAMP ASAKA, Japan — Land forces from the United States, Japan and the Philippines are teaming up to address security challenges in the Indo-Pacific, military leaders from the three nations told reporters Sunday.

Five generals from the three democracies discussed land force cooperation at Camp Asaka, a Japan Ground Self-Defense Force base in Saitama prefecture near the Japanese capital.

Their meeting coincided with Yama Sakura, an annual command-post exercise involving U.S. and Japanese military planners along with observers from Australia and the Philippines, that wrapped up Monday.

“This new Japan-Philippines U.S. trilateral relationship will lead to a more powerful force than bilateral ones to deter unilateral attempts to change the status quo,” Yoshida said following the generals’ meeting. 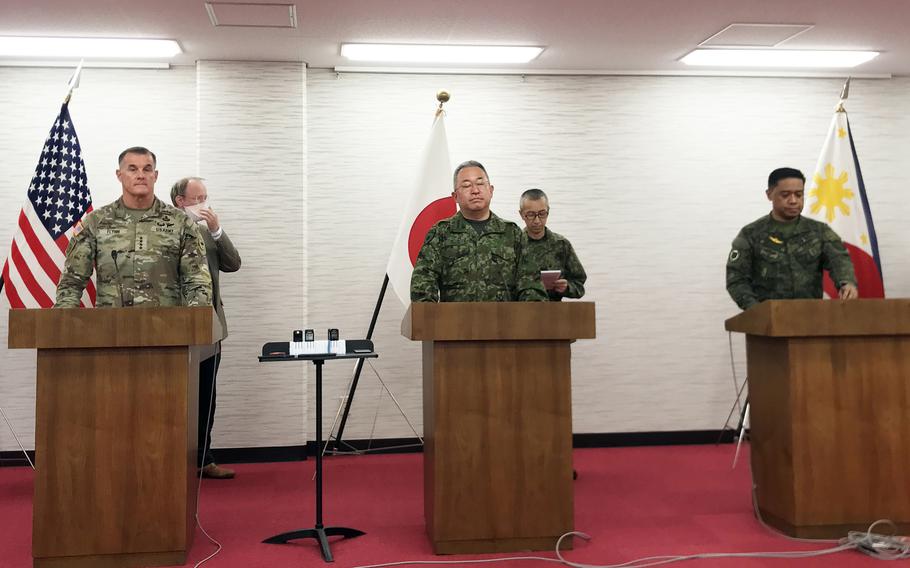 The leaders swapped opinions on the security environment in the Indo-Pacific and ground force cooperation between the three nations, he said.

“We developed strong trust among the five top leaders,” he told reporters.

A pair of Japanese F-15J Eagles landed Dec. 6 at the former Clark Air Base, north of Manila on the Philippines’ main island of Luzon, the Air Self-Defense Force tweeted the next day. The visit was the first to the Philippines by Japanese fighter jets since World War II.

Yoshida noted the similarities between Japan and the Philippines: both have sovereignty over many small islands, both are prone to natural disasters and both have strong alliances with the U.S.

The countries also have territorial disputes with Beijing, which has occupied territory claimed by the Philippines in the South China Sea and regularly sends coast guard vessels into waters claimed by Japan in the East China Sea.

The U.S. has promised to defend the Senkaku Islands, administered by Japan but also claimed by China and Taiwan, and the Navy has challenged Beijing’s South China Sea claims with freedom-of-navigation patrols by warships in the disputed waters.

The generals plan to meet each year and send observers to bilateral exercises, Yoshida said.

Yama Sakura has grown in scope and complexity since it began 40 years ago. Including capabilities from the Philippine army and marine corps would be exciting additions to the training, Flynn said.

Brawner described the generals’ meeting as an “historic event” that will yield activity next year, although he didn’t specify what that will involve.

Pressed, the Filipino general declined to talk about China’s rapidly growing military, but noted the U.S., Japan and the Philippines are working together for a peaceful and stable region and that a rules-based order is especially important “when it comes to our maritime environment.”