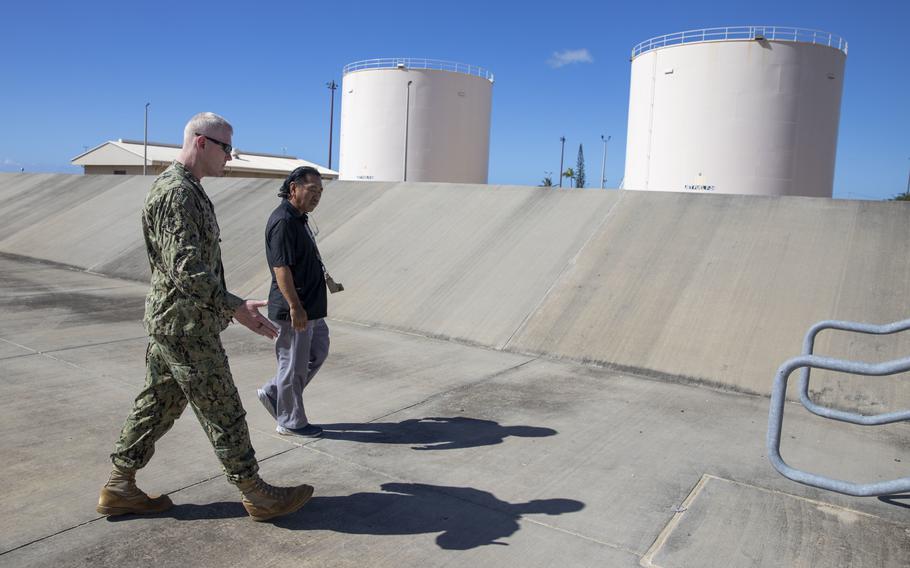 (Tribune News Service) — One year after jet fuel from the Navy’s underground Red Hill Bulk Fuel Storage Facility contaminated the service’s Oahu water system, which serves 93,000 people, military officials say they are pushing to remove the fuel from the site and take care of those whose health has been affected.

“This last year has been extremely difficult for our military families and the people of Hawaii,“ said commander of Joint Task Force Red Hill Rear Adm. John Wade at a Monday news conference. “I acknowledge their anger, frustration, disappointment and mistrust. I hear them loud and clear. ... I remember the confusion,“ he said, pointing out that many military personnel and civilians he works with were directly affected. “This experience drives me every day. And I’m committed to get this right.”

The Red Hill facility’s tanks — which hold 104 million gallons of jet and marine diesel fuel — sit just 100 feet above a critical aquifer that provides the majority of Honolulu’s drinking water. The joint task force is making repairs to the aging World War II-era facility and its connecting pipeline system to make it safe enough to defuel the tanks.

Additionally, wider efforts are underway to potentially address the impacts of the water crisis. Among them, the military is seeking to set up a Red Hill clinic to evaluate and treat ailments reported by anyone who may have ingested fuel-tainted drinking water. The clinic is in the planning stages.

“We’re still fleshing out the specifics,“ said Dr. Jennifer Espiritu of Defense Health Agency Region Indo-Pacific. She said military medical officials are framing plans in tandem with the Department of Defense, the state Department of Health, the Centers for Disease Control and Prevention and others.

Meanwhile, the Red Hill crisis has strained the military health care system on Oahu, prompting some military families to look elsewhere for treatment. Wade said he is aware of cases of active-duty personnel seeing civilian doctors for medical care because of capacity or delays and noted that they’re also asking for reimbursement.

In March the U.S. Pacific Fleet’s top surgeon, Capt. Michael McGinnis, said there was no evidence to suggest that the contaminated water has caused any long-term health concerns for those exposed. But hundreds of people insist they continue to suffer serious problems. Espiritu said the most common complaints are skin problems and gastrointestinal issues.

However, Espiritu said that it’s been a challenge to diagnose and treat people because research on petroleum exposure is relatively limited, and many of the illnesses associated with it are long-term.

“The health effects that we’re looking for typically take decades — cancers, as well as neurological conditions. We’re branching into new territory,“ Espiritu said. “This is an unprecedented exposure,“ with an “unprecedented number of people complaining of term effects.”

Last week, during a hearing of the U.S. Senate Veterans Affairs Committee, officials told Hawaii’s U.S. Sen. Mazie Hirono that the the Department of Veterans Affairs is studying jet fuel exposure but that there are still serious gaps in documented medical science on its potential long-and short-term effects.

Many families still distrust military and state officials as well as some proclamations that the water is now safe to drink. Espiritu said the struggle to find definitive answers has prompted some families to seek out “alternative“ sources of medical advice, resulting in a spread of “disinformation“ by self-proclaimed medical experts giving families questionable advice.

While the majority of those exposed to fuel were service members and their families, the Navy water system also serves several schools, businesses and the Kapilina Beach Homes — a former Navy housing area that has been turned into a rental community.

Though the military and VA are responsible for looking out for military families in the long term, civilians who say their health has been affected by the tainted military water system want to know who will care for them. Military officials said that they’re aware of the need to care for civilians affected by the crisis and said they’re working to figure out how best to address the matter.

The military’s current projected timeline aims for completion of defueling by June 2024. But Wade said it’s his hope to work at an accelerated pace. “I have challenged my team and to work with all the stakeholders to reduce that timeline even more,“ Wade said. “But again, safety over speed.”

Meanwhile, the Navy’s proposal to keep the defueled tanks and pipelines intact and find an alternative use for them has raised eyebrows. Though Navy officials insist the tanks will never be filled with fuel again, some Oahu residents are suspicious of the proposal. And when pressed, military officials have provided vague details about “alternative“ options for the facility.

“There’s a lot of good ideas and things that folks are recommending,“ Navy Region Hawaii Rear Adm. Stephen Barnett said. He said a process involving a “repurposing study,“ supported by a grant that will allow the Navy to explore ways the facility can be used, is expected to begin in 2023.