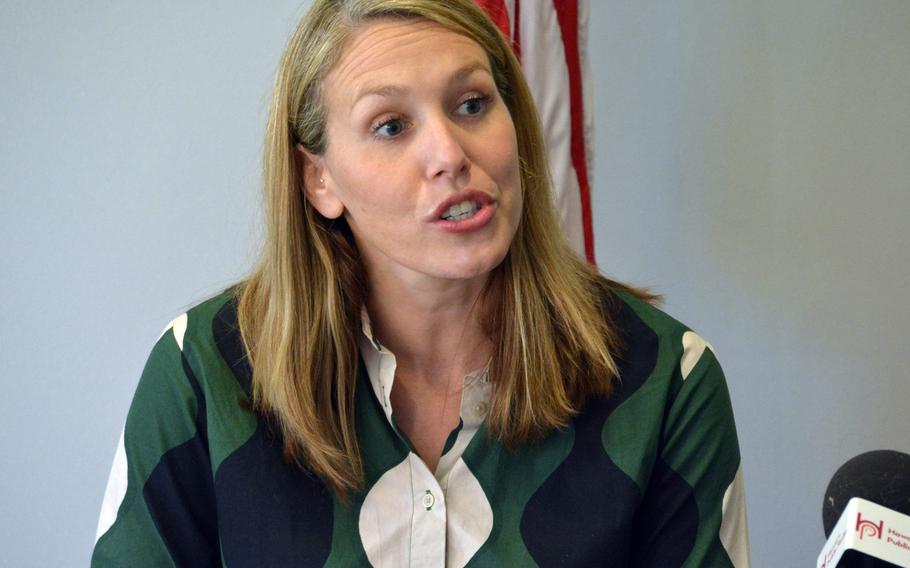 Meredith Berger, assistant secretary of the Navy for energy, installations and environment, speaks to reporters Nov. 1, 2022, at Joint Base Pearl Harbor-Hickam, Hawaii, about closure plans for the Red Hill fuel storage facility. (Wyatt Olson/Stars and Stripes)

JOINT BASE PEARL HARBOR-HICKAM, Hawaii — The Navy on Tuesday recommended the Red Hill underground fuel facility be permanently closed by sealing its massive tanks in place rather than removing them or filling them with an inert material.

“Overall, permanent Closure in Place is the alternative with the lowest impact to the environment and local community,” states a declassified version of the Navy’s closure plan released Tuesday.

“In addition, it has the shortest schedule and would be the safest alternative to execute, with no significant issues related to engineering feasibility,” the plan states.

The Navy estimates closure would be completed in 2027 under this alternative, which will require final approval by the Hawaii Department of Health.

The facility — built during World War II and regarded as an astounding feat of engineering at the time — holds 20 underground tanks. Each is 100 feet in diameter and between 238 and 250 feet high.

Lined internally with welded steel plates and surrounded by reinforced concrete, the tanks can each hold roughly 1.25 million gallons.

The Navy’s preferred alternative would allow repurposing the buried tanks for a “beneficial non-fuel use,” the plan states.

“A lot of this work is dependent on the pace that we can do the cleaning, and that's limited by the layout of the tanks, the size of the tanks, access to the tunnels,” Meredith Berger, assistant secretary of the Navy for energy, installations and environment, said Tuesday during a news conference at Joint Base Pearl Harbor-Hickam.

“This is a meticulous process,” she said. “Just like Red Hill was a new thing when it was built so long ago, it is a new thing when it’s closing. We've never done something of this size before, but we are committed to make sure that we do it right.”

Defense Secretary Lloyd Austin decided to close the facility on March 7 after a November 2021 well water contamination morphed into a major crisis.

The fuel contaminated one of three wells used for the Navy’s water distribution system that supplied almost 10,000 homes in military communities on and near the joint base.

Berger said the Navy will seek additional analysis by an independent third-party contractor regarding the four alternatives considered: closure in place, closure in place for potential non-fuel reuse of tanks, closure with filling of tanks with inert material and removal of tank steel liners followed by filling.

That analysis is expected to be complete by December.

“And then, once the Department of Health has had the opportunity to review this information along with the closure plan that we’ve provided today, we’ll request their approval for that closure in place,” Berger said. A chart from the Navy’s closure plan for the Red Hill storage facility in Hawaii lists four alternatives, with closure in place being its preferred choice. (U.S. Navy)

The closure is being done in four phases, the first three of which will happen concurrently with the ongoing process of emptying roughly 104 million gallons of fuel from the tanks over the next two years.

Phase four is the actual implementation of the permanent closures of the tank, Rear Adm. Steve Barnett, commander of Navy Region Hawaii, said at the news conference.

“This includes ventilating and cleaning the 20 large tanks, the surge tanks and the associated piping,” he said. “We're also going to have to put in place some tank security, electricity and access for long-term maintenance and environmental monitoring.”

The independent contractor will seek input from regulators, stakeholders, academia and the public for ideas about how the empty tanks might be used if left in place.

Barnett mentioned “hydroelectric” and “some type of storage” as realistic examples of future uses for the tanks.

Capt. Cameron Geertsema, commander of Naval Facilities Engineering Systems Command Hawaii, told reporters that a top priority in closure is remediation and removal of fuel-contaminated soil around and below the tanks.

Some of that work is straightforward removal of soil with “shovel-in-the-ground kind of stuff,” he said.

But given the size and depth of the tanks, other methods of cleanup will be needed.

The Navy is working with architectural engineering firms on technologies such as chemical injections and vapor extraction to mitigate contamination, he said.