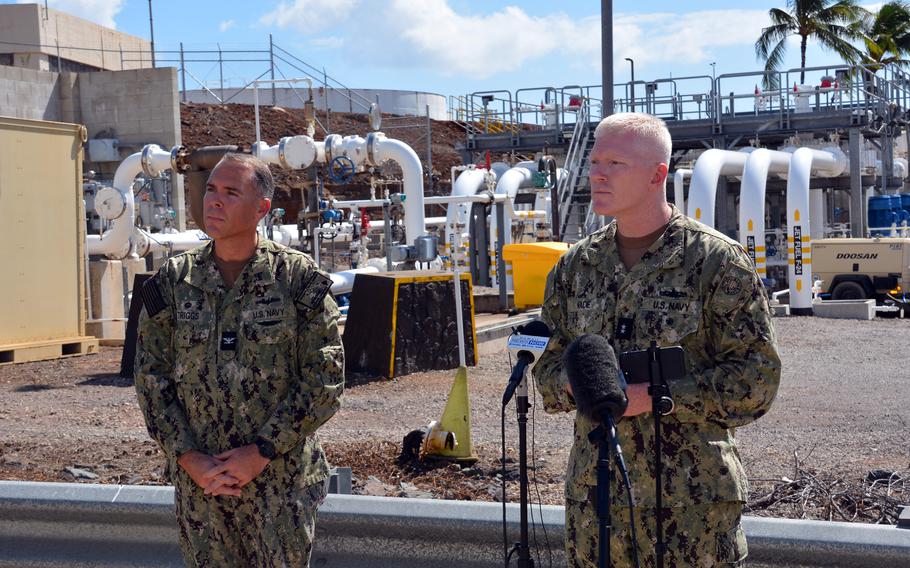 Over the next week, the Navy will drain roughly 1 million gallons of fuel from three miles of pipelines between the facility and Joint Base Pearl Harbor-Hickam, Rear Adm. John Wade, the commander of Joint Task Force-Red Hill, said during a news conference Monday at the joint base.

Wade and Capt. Shawn Triggs, the operations director for defueling, fielded questions from reporters while standing near an above-ground tank that will be used to hold some of the pipeline fuel.

“There's another 104 million gallons in the storage tanks,” Wade said. “In order to defuel, the first step that we need to do is to safely remove the fuel from those pipelines. That is called unpacking.

“The unpacking allows us to then conduct repairs, modifications and enhancements so that we can get to the larger defueling effort with the greatest risk reductions possible to make that the safe evolution.”

The unpacking this week represents the first time fuel has flowed through the pipelines since Nov. 28. The facility ceased operations that day after jet fuel was discovered in one of three wells the Navy uses for its water distribution system for two dozen military communities on and near the joint base.

Thousands of residents were temporarily relocated to Waikiki Beach hotels earlier this year as the Navy isolated the contaminated well and flushed water mains and pipes in homes.

Hundreds claim to suffer from long-term conditions and illnesses related to using the fuel-tainted water.

Defense Secretary Lloyd Austin on March 7 ordered the facility to be permanently closed.

“The defueling of the Red Hill facility is the right thing to do for our community, for the people of Hawaii, for our environment, for national security,” Wade told reporters Monday.

The unpacking process is broken into four phases, with the first two focused on safety inspection and valve checks already completed.

Phase three beginning Tuesday and lasting six days is expected to remove most of the fuel, Triggs said.

“Gravity can only get us so far,” Triggs said. “We're going to have to actually remove the residual fuel by pulling it out of the line, and that actually will be done in phase four.”

Triggs motioned to a fuel tank that can hold up to 400,000 gallons and said that the final fuel squeezed out will be loaded into it.

All fuel emptied from the pipelines will be used by local ships and aircraft, he said.

Although the unpacking will happen over almost a week’s time, “there will only be about 12 hours of actual fuel movement,” Triggs said.

Once the pipelines are emptied, they will be repaired and upgraded over the following year so that the 104 million gallons in the tanks can be safely removed, Triggs said.

The Navy estimates that the facility will be emptied and ready for permanent closure in the summer 2024.