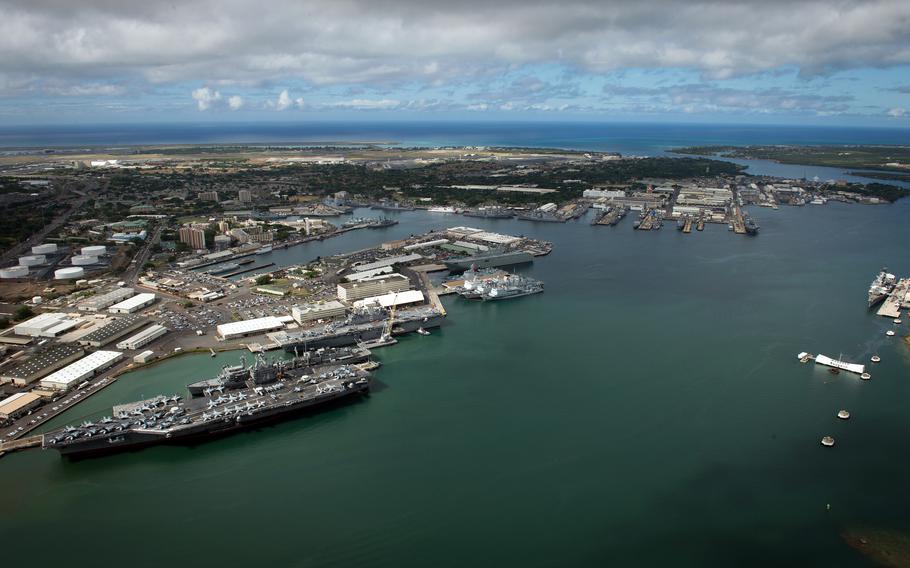 HONOLULU (Tribune News Service) — The Navy is contesting an $8.7 million fine for Clean Water Act violations and alleged deficiencies at its Pearl Harbor-­Hickam wastewater treatment system, arguing that the penalty levied by the state Department of Health is legally prohibited because the state is barred from seeking punitive fines.

DOH fined the Navy in September for 766 counts of discharging undertreated sewage into the ocean between January 2020 and July 2022, in addition to 229 counts of operational and maintenance failures at its Joint Base Pearl Harbor-Hickam wastewater treatment plant. DOH ordered the Navy to do extensive repairs to prevent a catastrophic failure. The Navy had 20 days to contest the order.

On Oct. 11, Navy Capt. Cameron Geertsema sent a letter to DOH requesting a hearing to dispute the fine and reach a resolution. He wrote that the Navy wants to “better understand your goals and incorporate those into a resolution that addresses recent incidents in a sound, environmentally compliant, cost effective, and timely manner.”

Geertsema said the Navy remains committed to environmental protection, despite contesting the fine.

“While we are requesting a hearing, we want to assure you that (Commander, Navy Region Hawaii ) takes its environmental compliance requirements seriously,“ Geertsema wrote. “Further CNRH wants to ensure that all members of the Hawaii community, including its sailors, marines, civilian employees and their families have full confidence that the waters are environmentally sound and safe.”

The Navy also said it’s been working to fix problems at the facility since entering into a Federal Facilities Compliance Agreement with the U.S. Environmental Protection Agency in June 2021.

The Navy has faced a barrage of criticism for its environmental record in Hawaii since fuel from its Red Hill facility contaminated its drinking water system in 2021, sickening military families around Joint Base Pearl Harbor-Hickam and polluting the aquifer. The recent fine for clean-water violations compounded that scrutiny. This week the Navy is scrambling to fix water main breaks that left its 93,000 customers under a boil-water advisory.

Matthew Kurano, an environmental health specialist with DOH’s Clean Water Branch, in in September, said DOH was being more proactive in enforcing environmental regulations in the wake of Red Hill.

“Red Hill is definitely fresh in all of our minds, and we just really want to make sure things like Red Hill and those types of accidents and environmental catastrophes don’t occur, and that’s why we took this enforcement action right now,“ he said during a September media briefing.

But the Navy says the state is barred from fining it as punishment for past violations of the Clean Water Act and related state laws, citing the 1992 U.S. Supreme Court decision in Department of Energy v. Ohio. The state of Ohio had sued the U.S. Department of Energy for violating federal and state pollution laws, including the Clean Water Act, while operating a uranium-­processing facility in Fernald, Ohio. The Supreme Court ruled in favor of the federal government, saying that it had not waived its sovereign immunity against claims for punitive penalties levied for prior violations of those statutes.

“With respect to the proposed monetary penalty, CNRH notes here, and intends to reiterate, that it cannot pay the penalty as a matter of law,“ wrote Geertsema in its letter to DOH.

DOH didn’t address the Navy’s legal argument in a statement provided to the Honolulu Star-Advertiser. Kathleen Ho, DOH’s deputy director of environmental health, said the fine was about sending a message and that DOH will take “all legal action necessary “ to bring the Navy’s wastewater treatment plant into compliance with environmental laws.

“Regardless of whether the state collects the penalty, it was important to the Department of Health to levy the maximum penalty possible under state law so the Navy and the community could understand the gravity of this issue,“ said Ho.

DOH seeks to fine the Navy for discharging wastewater into the ocean in recent years that exceeded the permissible levels of enterococci bacteria, an indicator of fecal contamination. DOH’s violation order says the Navy exceeded the limit every day in 2020, as well as 276 days in 2021 and 122 days this year. Recent inspections of the facility also found that six of eight ultraviolet channels used in disinfecting wastewater were inoperable, indicating that the Navy was not able to adequately disinfect effluent during peak flows, according to DOH. Inspectors also found that sewage sludge was accumulating near an area where treated wastewater is discharged into the ocean, among other problems.

Wastewater from the plant is deposited about a mile offshore in Mamala Bay.

The Navy contested that fine as well. On Nov. 15, Navy Capt. Gordie Meyer sent a letter to DOH requesting a hearing on the violation order. He said most of the claims were the result of miscommunication between DOH and the Navy or “clear error “ on the part of DOH.

Five days later a Red Hill pipeline in an underground tunnel ruptured, spewing thousands of gallons of fuel for more than 34 hours before it was contained. Some of that fuel seeped into a nearby drinking water shaft and into the faucets of military families.

Navy spokesperson Mike Andrews said the Navy contested the 2021 order “primarily to preserve its right to amicably conclude the matter through resolution discussions.”