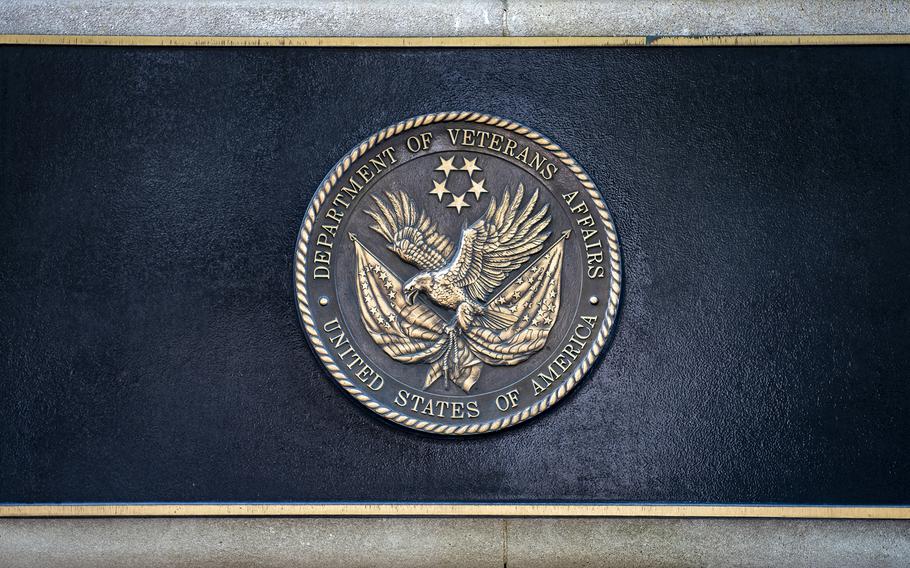 The VA logo is seen at an entrance to the Veterans Affairs building in Washington, D.C. on July 6, 2022. (Carlos Bongioanni/Stars and Stripes)

(Tribune News Service) — Officials with the Department of Veterans Affairs told lawmakers Wednesday that they anticipate following the long-term effects of the Red Hill water crisis for many years.

During a Senate Veterans Affairs Committee hearing focusing on the implementation of the recently passed “Honoring Our Promise to Address Comprehensive Toxics “ legislation—better known as the PACT Act—the VA’s Dr. Patricia Hastings said that Red Hill “is a cohort that we will follow into the future, and this will be decades of following up.”

“I hear from individuals and families who had all kinds of health issues that clearly needs to be tracked, “ Hirono told VA officials. “And so we don’t want to end up in a situation that resulted in our having to pass the PACT Act, where exposures going back decades ... we have to figure out the cause and effect.”

The PACT Act was passed to address the long-term health impacts of exposure to conditions related to burn pits and other toxic exposures and more presumptive-exposure locations for Agent Orange and radiation. Burn pits were used in Iraq and Afghanistan to dispose of chemicals, tires, plastics, medical equipment and human waste on military bases. Prior to its passage, as many as 70 % of disability claims involving exposure to the pits were denied by the VA.

Among the PACT Act’s provisions was a push for the VA to study the effects of exposure to jet fuels. Hastings said the Office of Health Outcomes Military Exposures started looking at fuels and jet fuels exposures about two years ago.

“We have already completed some of that preliminary work and thank you very much for the PACT Act, that expands that and allows us to work with the National Academy, “ she said. “We are very excited by this work. It is important because jet fuels are what the military runs on, and we have to know more about them. And we are doing that.”

The Navy’s handling of fuel and water supplies is coming under increased scrutiny with fuel contamination of water not limited to Oahu. This year as the aircraft carrier USS Nimitz was operating in the Pacific off the coast of California on Sept. 16, JP-5 leaked into the ship’s potable water system. Navy officials said that the crew took “immediate action “ and declared the water safe to use as of Sept. 19. But on Sept. 21, another test of the ship’s water supply found more traces of jet fuel in the water and the vessel was recalled to San Diego.

Hastings told Hirono that the Department of Defense has a registry of people that were exposed to the Red Hill fuel on Oahu and that the VA is working with the Pentagon. However, some service members and military family members who experienced fuel exposure from Red Hill have accused some military officials of downplaying the health effects, as well as the number of people whose health may have been impacted.