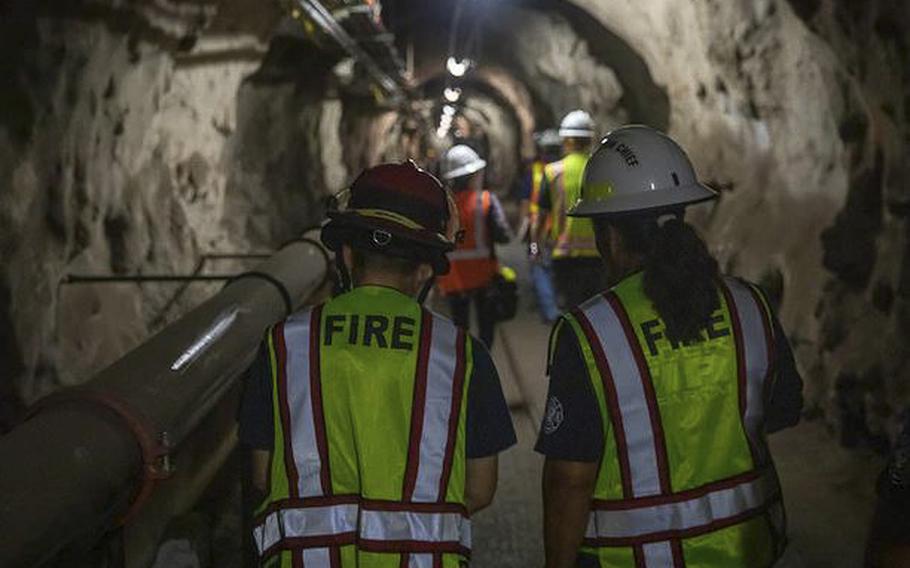 A safety walk through is conducted at the Red Hill Bulk Fuel Storage Facility in Halawa, Hawaii, on Oct. 12, 2022. (U.S. Indo-Pacific Command)

(Tribune News Service) — The military is slated to host the first in a series of a roundtable discussions with Hawaii officials and community leaders on Friday to discuss ongoing efforts to defuel and shut down the Navy’s underground Red Hill Bulk Fuel Storage Facility.

“Specifically, the forum will provide members an opportunity to share insights, knowledge, and professional expertise through meaningful feedback, dialogue and discussions, “ Joint Task Force Red Hill said in its news release. The task force was stood up in September under the leadership of Rear Adm. John Wade to oversee defueling of the Red Hill storage tanks.

“The forum will also ensure members receive regular updates on the progress being made on the defueling plan and anticipated next steps so they can apprise their peers, constituents, association participants, and interested members of the community.” In November 2021 fuel from the Red Hill facility contaminated the Navy’s Oahu water system that serves about 93, 000 people. The water crisis affected service members, military families as well as schools, businesses and civilian families connected to the water system. Residents of the Kapilina Beach Homes, a former military housing area, were initially told they weren’t connected to the system only for the Navy to.

After months of resisting a state emergency order to drain Red Hill tanks, Defense Secretary Lloyd Austin in March ordered the Navy to permanently defuel and shut down the facility, which was constructed nearly 80 years ago. In September Austin appointed Wade to lead JTF Red Hill.

The Red Hill tanks, which currently hold more than 100 million gallons of fuel, sit 100 feet above a critical aquifer for Honolulu drinking water. Military officials have warned that moving too quickly on the defueling efforts increases the risk of a spill that could contaminate the aquifer. Critics of the military have argued that the aging fuel tanks are collectively a “ticking time bomb “ that threatens Honolulu’s water supply every minute they remain fueled.

Earlier this month JTF Red Hill successfully “unpacked “ 1 million gallons of fuel from the 3.5-mile-long pipelines connecting the tanks to fueling facilities at Joint Base Pearl Harbor-­Hickam. Now the Navy is tasked with making various repairs to ensure the tanks can be safely defueled—a process the Navy expects to be completed by June 2024.

However, the Navy recently submitted a proposal to keep the tanks and pipes in place underground, repurposing them for another use—potentially as a hydroelectric plant to provide an alternative energy source. Local officials and community leaders have expressed skepticism of the proposal. Navy officials have insisted there are no plans to refuel the tanks with petroleum products. But a recent meeting of the state’s Red Hill Fuel Tank Advisory Committee, the Board of Water Supply’s Lau expressed concern that the Navy could later attempt to reclaim and refuel the facility.

“If the tank liners are still there, the pipes that move fuel to and from Pearl Harbor, if everything is still there in place, we are only one degree of freedom from getting back to fuel storage over the aquifer, “ Lau told the committee.

Local officials and community members have pushed for the military to open some sort of avenue for community oversight and feedback on its defueling efforts.

In response, shortly after being named as task force commander, Wade said, “I do feel that having that voice will help me to understand the tenor and tone, and how I can be better and more responsive to our community.” Further, the new sharing forum “will also allow me to, hopefully, better communicate and break down barriers, “ such as in matters “where it may be clear to me but may not be clear to the public.”

While the forum currently has 12 members, JTF Red Hill said that “as the de ­fueling planning process continues to evolve, forum membership may adjust as information voids are discovered or if other integral principals are necessary to ensure inclusive representation.”