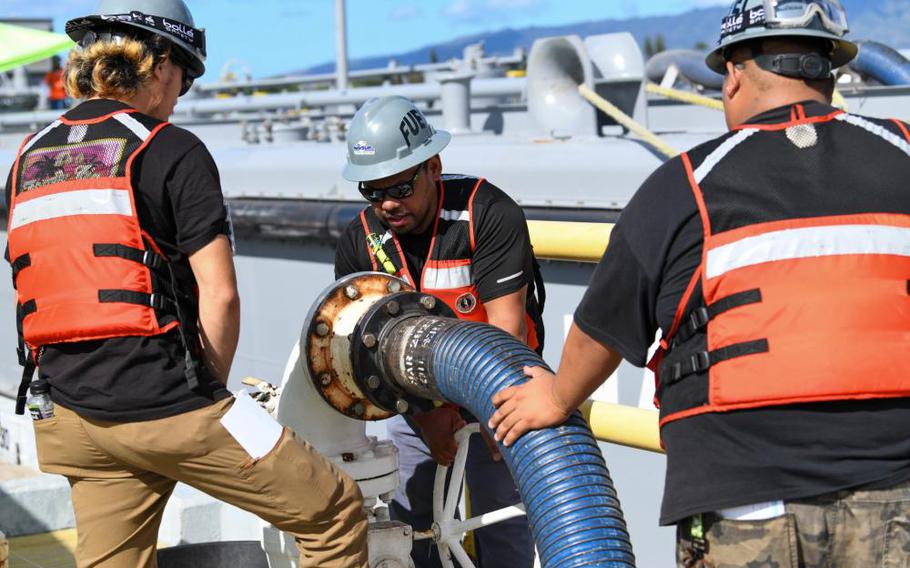 Fuel distribution system workers turn a valve to begin unpacking F76 marine diesel fuel onboard Joint Base Pearl Harbor-Hickam Hawaii, Oct. 27, 2022. Defense Secretary Lloyd Austin ordered the permanent defueling of the Red Hill tanks in March after months of efforts by the Navy to fight an emergency order from the state Department of Health calling on the Navy to empty the tanks. (Luke Cohen/U.S. Marine Corps)

(Tribune News Service) — Joint Task Force Red Hill, which is overseeing the defueling, announced Thursday that it had successfully removed 1, 058, 187 gallons from the pipelines, which connect the massive Red Hill tanks to facilities at Joint Base Pearl Harbor-Hickam.

The military said it has successfully "unpacked " fuel from the Navy's Red Hill pipelines, a critical first step to the ultimate plan to defuel the tanks at the decades-old underground Red Hill fuel farm.

It's the first time the pipelines have moved fuel since the Navy stopped all Red Hill fueling operations in November 2021, when fuel from the facility contaminated the Navy's water system. The Navy water system provides potable water to about 93, 000 people on Oahu, including service members, military families, civilians living in former military housing areas, schools and businesses.

State officials and the military said they have successfully restored the Navy water system, but the Red Hill fuel tanks—whose current capacity was reported as 104 million gallons—sit just 100 feet above a critical aquifer that Honolulu relies on for almost all of its drinking water.

Joint Task Force Red Hill has been moving the fuel to above-ground tanks at JBPHH and to fuel storage barges. The Red Hill facility holds three kinds of fuel that each travel down their own pipeline : F-24 commercial jet fuel ; F-76 marine diesel fuel that is used to power the Navy's ships; and JP-5, the kerosene-based jet fuel that contaminated the Navy's Red Hill well.

Until the unpacking began, the fuel sat in the pipelines, which span about 2.5 miles and were built to let gravity take fuel down from the Red Hill tanks to the military bases below. During the unpacking process, Joint Task Force Red Hill removed 887, 937 gallons of fuel from the pipes using gravity and 170, 250 gallons by "low-point transfer, " which involved pumping the residual fuel through the pipes.

The condition of the pipelines has been a point of concern since at least 2016, when an internal military review found the aging pipelines were suffering serious corrosion and other problems. Military officials said that fuel needed to be removed from the pipelines to allow for more thorough repairs to the pipelines and the rest of the Red Hill system to ensure fuel can be safely removed without threatening the aquifer or causing other disasters.

The Red Hill facility was built underground during World War II to make it harder for enemy forces to strike. The 20 fuel tanks, each capable of storing up to 12.5 million gallons of fuel, were installed inside cavities mined into a volcanic mountain ridge. But it's unique architecture also led to unique problems safely maintaining and operating the nearly 80-year-old facility.

Defense Secretary Lloyd Austin ordered the permanent defueling of the Red Hill tanks in March after months of efforts by the Navy to fight an emergency order from the state Department of Health calling on the Navy to empty the tanks.

Aging infrastructure and maintenance problems have become an increasingly visible problem for the Navy in Hawaii.

In September, DOH levied an $8.7 million fine against the Navy for 766 counts of discharging undertreated sewage into the ocean between January 2020 and July 2022, as well as 229 counts of operational and maintenance failures at its JBPHH wastewater treatment plant.

Last month the Navy contested the fine, arguing it cannot legally pay the fine because the state is barred from seeking punitive fines.

The planned start of unpacking operations at Red Hill was disrupted by several water main breaks in the Navy's Oahu water system Oct. 14 that prompted school closures and a boil-water notice. The breaks reduced water pressure, leaving Joint Task Force Red Hill without resources for firefighting in the event of an accident during the unpacking operations. The task force ultimately began unpacking Oct. 25.

"I want to thank all those involved in the planning and preparation for the unpacking process and then all of our teammates for their professionalism and safe execution, " said Joint Task Force Red Hill commander Rear Adm. John Wade in a news release posted on the Navy's official website. "I also want to thank our elected representatives, the Department of Health, the Environmental Protection Agency and the U.S. Coast Guard for their support, attention and oversight."

In a news release Friday, task force spokesperson James Hoeft said that "during this phase we will conduct all necessary repairs, modifications and enhancements to the Red Hill complex to reduce risk during defueling, " and that the task force will "conduct iterative planning in partnership with the Department of Health and Environmental Protection Agency to find ways to reduce the defueling timeline safely."

Military officials say the entire defueling process is expected to be completed by the summer of 2024. But it's not clear that will be the end of the story. This week the Navy submitted a closure plan to DOH that advocated "closure in place with beneficial reuse, " which would keep the facility in place and find an alternative use for it.

During a Tuesday news conference at JBPHH, Meredith Berger, assistant secretary of the Navy for energy, installations and environment, told reporters "we will continue to make sure we are protective of the environment, of the people and of the community, and we are not—I want to make sure this is very clear—we are not going to pursue any beneficial reuse option that would contain potential contaminants, and none of the options that we have laid on the table would be a fuel reuse."

Defense officials have been hesitant to discuss potential specific uses of the Red Hill facility post-defueling but have floated the possibility of using it for a hydroelectric plant to provide an alternative energy source.