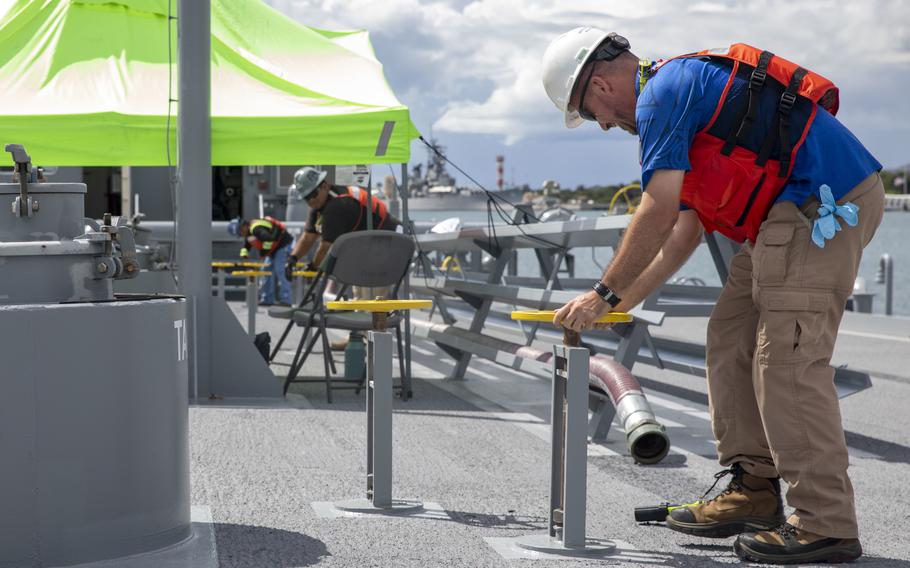 The families represent more than 100 individuals who had been living in military communities on and around Joint Base Pearl Harbor-Hickam in late 2021 when jet fuel was discovered in the Navy’s water distribution system.

The amended complaint adds the plaintiffs to the initial filing by four families on Aug. 31 in U.S. District Court of Hawaii that alleged the U.S. Navy “made negligent errors” when it spilled jet fuel at the Red Hill Bulk Fuel Storage Facility in May and November 2021.

The lawsuit, filed by Austin, Texas-based Just Well Law, does not ask for a specific amount of compensation, but it states the plaintiffs’ injuries include past and future pain and suffering, mental anguish, medical care, loss of income and physical impairment.

“While these families suffer, Navy officials continue to claim that families are not sick from their exposure to jet fuel, with medical gaslighting at the highest levels,” the lawsuit states. “Up to now, military officials have denied ongoing medical harm to service members, their families, or civilians.”

Navy spokesman Lt. Cmdr. James Adams said in an email Thursday that the Navy does not comment on current litigation.

The jet fuel leak from the World War II-era Red Hill facility contaminated one of three wells used by the Navy for its water system, resulting in roughly 3,200 temporarily relocating to hotels on Waikiki Beach for months last winter.

The state of Hawaii ordered the facility be closed, and in Defense Secretary Lloyd Austin announced in March it would be permanently shuttered. The Navy has just begun a five-year process for it closure.

In May, the Centers for Disease Control and Prevention published the results of a survey of households contaminated by the fuel that found almost 2,000 residents had experienced one or more new or worsened health symptoms. The survey had been conducted in January and February.

The CDC this week published the results of a follow-up survey in September in which 80% of the 986 individuals participating reported having “health symptoms” in the past 30 days.

The most common symptoms were headache, anxiety, dry skin, fatigue and insomnia, with 65% of respondents expressing “high or very-high confidence that the symptoms were related to the water contamination incident.”

Some plaintiffs describe the appearance of cysts or tumors found on organs, glands and skin in the wake of the contamination.

Richelle Dietz, who has lived in Earhart Village since February 2021, has developed cysts on her ovaries, for which her doctor has recommended a partial hysterectomy, the lawsuit states.

Isabel Maloon was living with her six children and active-duty husband at Aliamanu Military Reservation military housing in the summer of 2021 when she noticed changes in her family’s health, the lawsuit states.

The symptoms seemed to dissipate when the family left Hawaii on travel, the lawsuit states.

“After the jet fuel spill in November 2021, tropical island life turned into a daily battle to get clean, safe water,” the lawsuit states.

“The weight of the unknown looms over the family,” the lawsuit continued. “Isabel is worried about the long-term consequences. As of November 2022, the family still experiences anxiety, diarrhea, rashes, eye irritation, general malaise, hair loss, headaches, muscle and joint pain, runny noses, abdominal pain, and brain fog. Isabel has recurring yeast infections along with [urinary tract infections], and her vision is declining.”