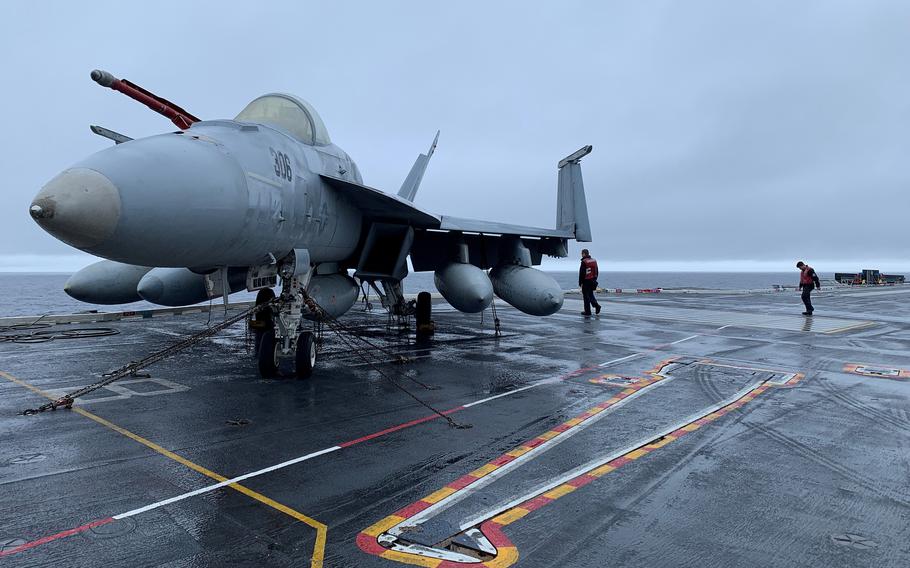 An F/A-18 Super Hornet jet sits on the flight deck of the USS Gerald R. Ford, Navy’s newest aircraft carrier, in international waters off the Atlantic coast of France on Nov. 13, 2022. (Alison Bath/Stars and Stripes)

ABOARD THE USS GERALD R. FORD — The Navy’s newest aircraft carrier is testing its mettle alongside allies in the north Atlantic on its maiden deployment, as part of a mission that its leadership said sends a powerful message to adversaries who may be watching.

The USS Gerald R. Ford’s deployment comes after major cost overruns, technical issues and other delays since it was commissioned into service in 2017 as the lead ship of its class.

But the sailors aboard the ship Sunday in international waters off the coast of France said the technological improvements, which include new radar, aircraft launch and propulsion systems, have made their operations faster and represent a clear upgrade from the Nimitz class of nuclear-powered carriers.

Naval officials wouldn’t say whether the Russians were sizing up Ford as it launched planes alongside six NATO allied naval forces last week, but it’s not unusual for the Kremlin to do so. 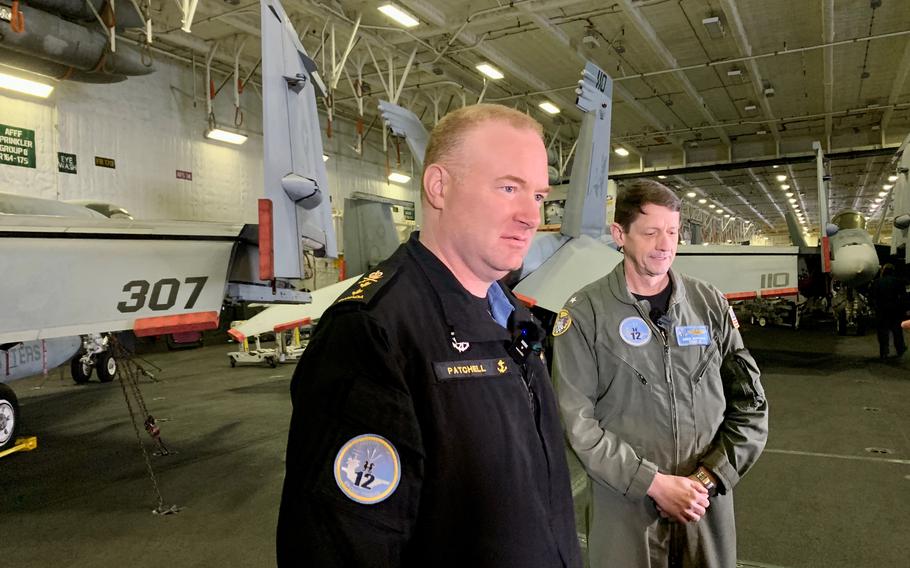 U.S. and NATO officials acknowledged in February that the Russians were watching the aircraft carrier USS Harry S. Truman and other ships during a multinational exercise in the Adriatic Sea.

That isn’t necessarily a bad thing in the eyes of some military officials, at a time when the U.S. and its allies are emphasizing NATO unity to reassure eastern members following Russia’s full-scale invasion of Ukraine in February.

Anyone watching can see that “this is not just an alliance on paper; this is an alliance matched by steel on the sea,” said Capt. Paul Lanzilotta, the Ford’s commanding officer, speaking to reporters on the ship’s flag bridge.

That message was clear when the Ford and other NATO ships sailed into Halifax, Nova Scotia, last month and during last week’s exercise with Canada, Denmark, France, Germany, Spain and the Netherlands, Lanzilotta and other officials said. 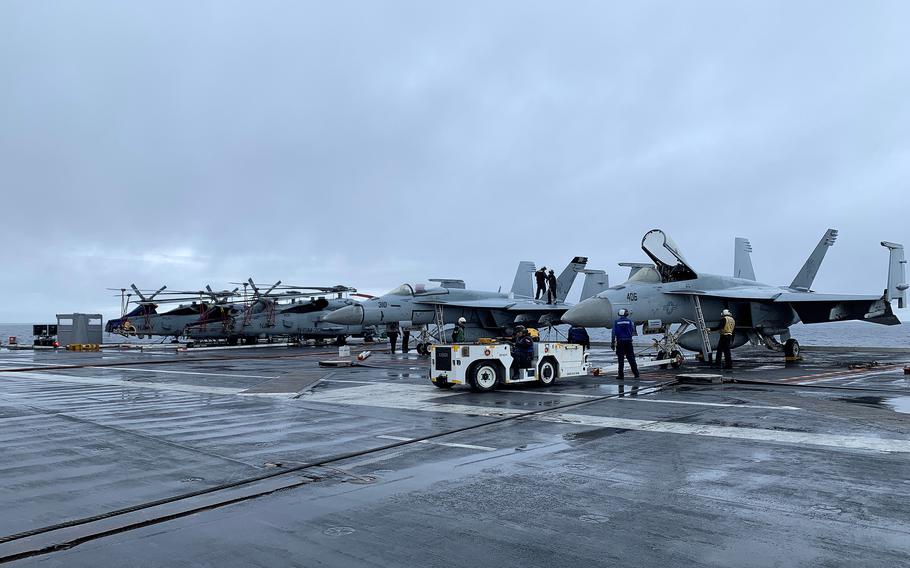 Crews work on aircraft aboard the flight deck of the USS Gerald R. Ford, which is on its first deployment, Sunday, Nov. 13, 2022, in international waters off the Atlantic coast of France. (Alison Bath/Stars and Stripes)

The Ford Carrier Strike Group left its Naval Station Norfolk, Va., homeport in early October on a two-month deployment designed to continue testing systems and train its air wing, the Navy said in an Oct. 5 statement.

The deployment is a prequel to a longer, more traditional deployment planned in 2023, USNI News reported Sept. 26.

On Sunday, maintenance and a replenishment-at-sea didn’t allow for flight operations, Navy officials said. The flights would have highlighted EMALS, which replaces the more than 70-year-old technology behind the steam powered system used on the service’s Nimitz-class carriers. 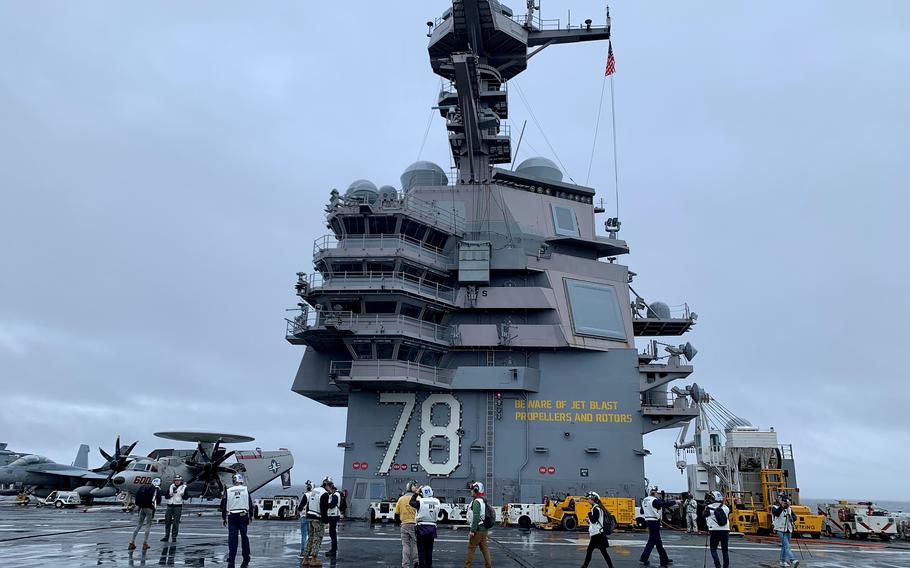 A group embarks aboard the aircraft carrier USS Gerald R. Ford in international waters off the coast of France on Nov. 13, 2022. The Navy’s newest carrier began its maiden deployment after departing its Virginia homeport last month. (Alison Bath/Stars and Stripes)

So far, the ship has seen more than 10,000 launches and recoveries using the system, which provides a smoother, more controlled launch that puts less stress on aircraft, officials said.

EMALS also offers greater flexibility in launching a range of aircraft, including aerial drones, although the ship hasn’t yet launched any, Lanzilotta said.

Huffman characterized the system, once heavily criticized for its high cost and unreliability, as “absolutely performing where we need it to be.”

But he also acknowledged that there is more work to do on EMALS, which the Navy says will increase sortie rates and reduce manning needs in part because of better use of space.

Ford’s capabilities also include six in-deck fuel positions that allow aircraft refueling without having to drag hoses across the flight deck. Lanzilotta said it took just four minutes to refuel the E-2D Hawkeye he recently was flying.

“It’s a little bit like a Formula 1 (race car) stop compared to having to pull those hoses,” said Lanzilotta, who noted the fueling stations not only make easier work for crew members but also help keep the flight deck taxi area clear.

Not all of Ford’s advantages are high-tech, though, sailors said Sunday.

Some quality-of-life improvements, such as private bathrooms in officers’ state rooms and higher-output air conditioning, are making conditions better for the crew, he said.

“This is a really nice way to live,” Lanzilotta said. 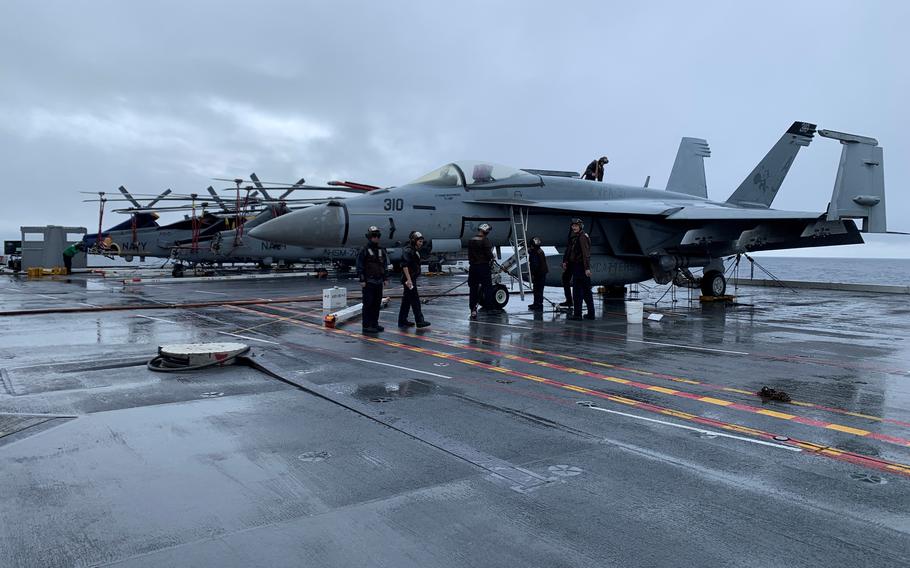 Crews work on aircraft aboard the flight deck of the USS Gerald R. Ford in the north Atlantic Ocean on Nov. 13, 2022. The Navy’s newest aircraft carrier is on its maiden deployment after leaving Norfolk, Va., last month. (Alison Bath/Stars and Stripes)

The Navy said Tuesday that maintenance and a replenishment-at-sea were the reasons why the aircraft carrier USS Gerald R. Ford did not conduct flight operations Sunday.