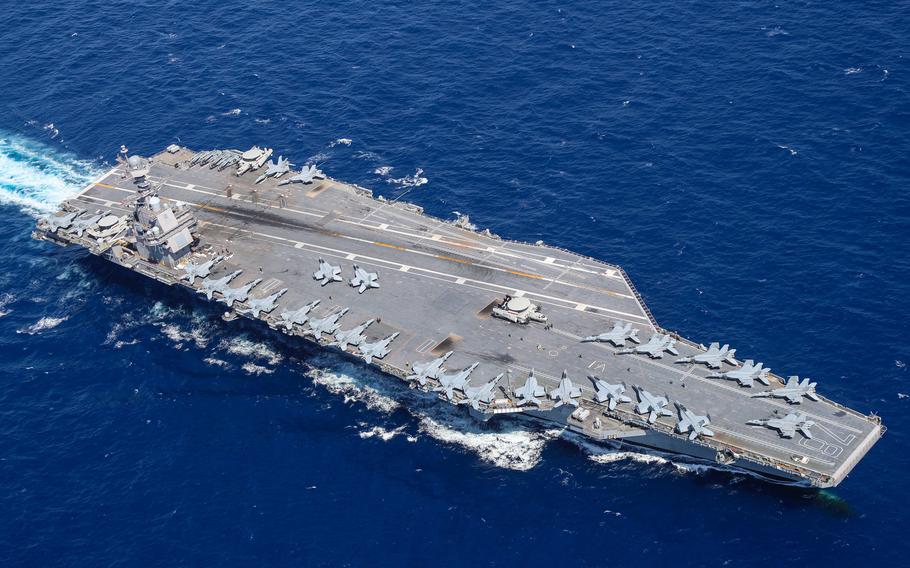 Aircraft attached to Carrier Air Wing (CVW) 8 sit on USS Gerald R. Ford’s (CVN 78) flight deck as the ship steams through the Atlantic Ocean, April 13, 2022. The Ford’s first deployment was postponed due to severe weather forecast for Hampton Roads as a nor’easter looms to the south. (Riley McDowell/U.S. Navy)

NORFOLK, Va. (Tribune News Service) — The USS Gerald R. Ford’s first deployment was postponed due to severe weather forecast for Hampton Roads as a nor’easter looms to the south.

The Navy’s newest carrier, which was years late and 27% over budget, was slated to finally push off from the pier Monday, but was forced into another delay “due to changing weather conditions,” said Lara Bollinger, public affairs officer for the U.S. 2nd Fleet.

Previously, the Navy planned to forgo a traditional, pier-side send-off for the Ford due to weather and safety concerns. The 2nd Fleet was also bracing for potential weather delays.

A new deployment date will be set when the weather allows, Bollinger said.

A coastal flooding event unseen for a decade could inundate parts of Hampton Roads on Monday — three days after the remnants of Hurricane Ian swept through the region.

A low-pressure system spawned in the aftermath of Ian is forecast to bring rain and northeast winds that could push tides higher than were experienced Friday, and Hampton Roads is under a flood warning until Tuesday.

National Weather Service Wakefield predicted 55-60 mph gusts along the coast late Sunday, persisting into Monday. The seas, meteorologists said, may be dangerous, with waves as high as 15 feet.

In the Chesapeake Bay, waves could reach 10 feet.

A gale warning was issued for the Chesapeake Bay through Monday night, and a storm watch was issued off Virginia Beach along the Atlantic.

The Ford has been delayed for at least two years by several factors, including the challenges posed by new technologies.

Now that it is ready — weather aside — the warship is touted as the Navy’s most technologically advanced carrier as it is the first to use a new aircraft-launching technology called the Electromagnetic Aircraft Launch System, also known as EMALS, to put planes in the air 25% faster.

The Ford will operate in the Atlantic Ocean as the lead ship of a strike group bearing the carrier’s name. The group, made up of 9,000 or so personnel, will focus training on air defense, anti-subsurface warfare, distributed maritime operations, mine countermeasures, and amphibious operations.

The Ford is the Navy’s newest — and largest — aircraft carrier, and the first of a new generation. The USS John F. Kennedy is expected to join the Ford’s class in 2024.