The nation’s newest aircraft carrier, the Enterprise, reaches a milestone 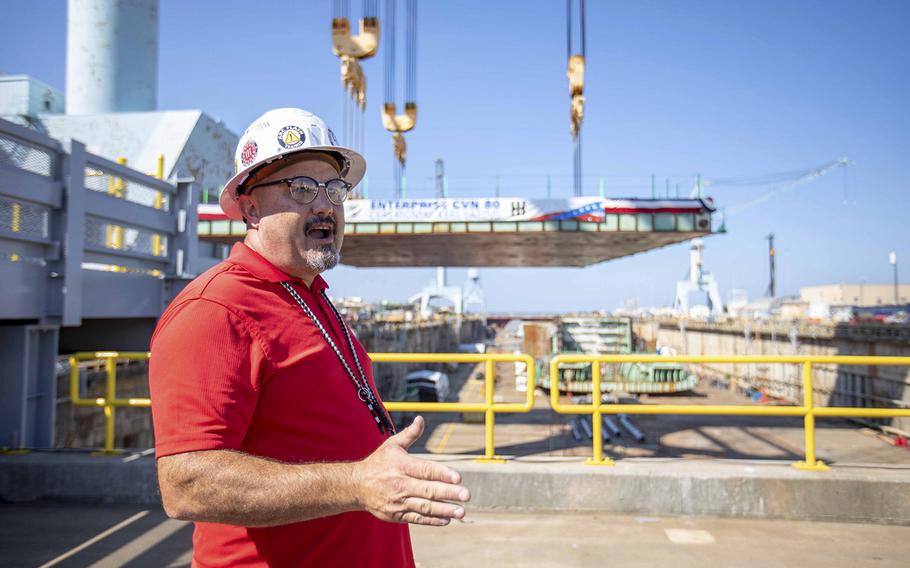 Facilities engineer Todd Meier speaks to the media regarding the USS Enterprise CVN 80 in the dry dock of the Newport News Shipbuilding yard on Aug. 26, 2022 ahead of Saturday’s keel-laying ceremony. (Kendall Warner/TNS)

He learned his trade as an apprentice while helping to build the aircraft carriers USS Gerald R. Ford and USS John F. Kennedy in Newport News Shipbuilding. This time around, he is the master teaching apprentices about pipefitting as the pieces of the newest aircraft carrier start to come together. He said he tries to be the same kind of mentor that his teachers were to him.

“Learning how to be an instructor, be open enough where people feel comfortable around you,” the Gloucester resident said Friday at the shipyard.

Like Denson, the Enterprise is also reaching a milestone — the shipyard is hosting the keel laying for the vessel on Saturday morning in an event that the public can watch livestreamed on HII’s website.

The more than 1,100-foot-long, 100,000-ton carrier will be the ninth Navy ship to bear the name Enterprise since 1775, according to Capt. Brian Metcalf, the program manager for the new Ford class of aircraft carrier. The occasional beeping of an alarm for a moving crane or other industrial equipment rang out and the sun beamed in the clear sky over the gantry crane. 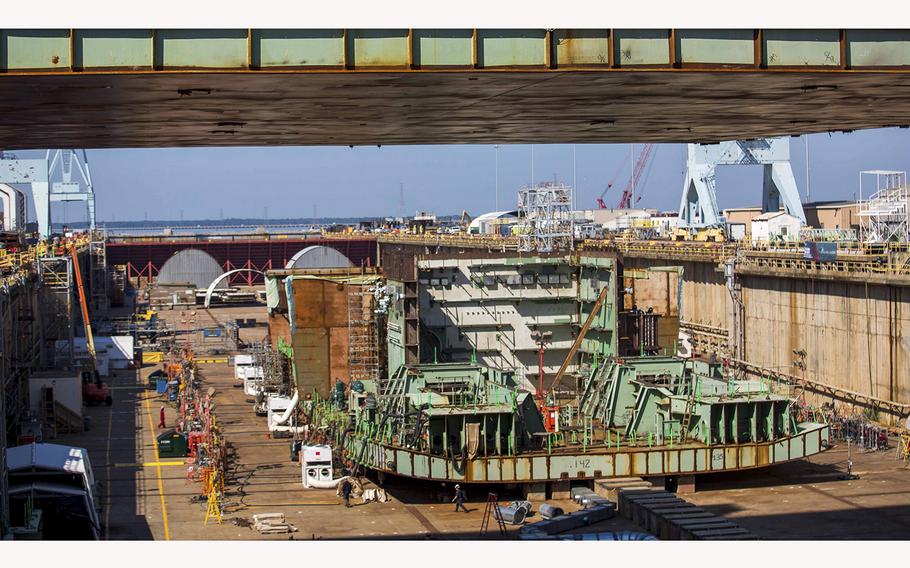 The USS Enterprise CVN 80 is seen in the Newport News Shipbuilding yard on Friday, Aug. 26, 2022 ahead of Saturday’s keel-laying ceremony. (Kendall Warner/TNS)

The Enterprise is slated to be completed by 2028 and the Doris Miller by 2032, according to the U.S. Naval Institute News.

Navy veteran Todd Meier, 52, of Windsor, remembers working on the previous Enterprise, CVN-65, while at the shipyard. At the time, the aircraft carrier was the first in the world to use nuclear power.

“It was unique by any stretch of the imagination,” he said.

The new Enterprise will use two nuclear reactors versus eight on CVN-65, which was decommissioned in 2017. As well, the catapult that launches the planes on the new carrier is powered electromagnetically, and the Enterprise will not have any steam generation, Meier said.

Another difference between the ships is the build process. Thousands of blueprints were required to construct the previous Enterprise, according to Meier.

“Now, we have electronic tablets … that you can hold up and see what that ship looks like in 3D,” Meier said.

He said that means quality and other checks can be done on the spot instead of having to leave the dry dock, find the blueprint and then return to the same spot. Additionally, everyone can be on the same page as the work continues in real time.

The term for this new method is “integrated digital shipbuilding,” according to Metcalf.

Fields said the Enterprise will be launched in a couple years after being erected in the dry dock and then will be tested in the south side of the yard and then turned over to the Navy in five or six years.

Foreman Rodney Taylor enjoys watching the videos of the shipyard’s vessels’ sea trials and hopes to go on one day. Regardless, over this 12 years at the shipyard, the Gloucester resident gets plenty of satisfaction watching the ships he and his colleagues have crafted head off to sea.

“It’s a sense of pride knowing you’ve built a product that the Navy can rely on and live on,” Taylor said.