(Tribune News Service) — Jondanae Garza was in elementary school when the first cut of steel for the USS Gerald R. Ford was made in 2005. Now 17 years later, she shares a milestone with the Navy’s newest and most technologically advanced warship — both are deploying for the first time.

The Ford departed Oct. 4 from Naval Station Norfolk, embarking on a two-month-long deployment to train with North Atlantic Treaty Organization allies. During the special deployment, which comes after nearly two decades of construction, the crew will hone the capabilities of the warship’s 23 new technologies.

One of those technologies is the advanced damage control system — a unique system Garza has learned as part of her duties as a second class hull maintenance technician for the ship. She is one of 26, among a crew of approximately 4,000 sailors, who work with this new technology.

“Some of my friends — other sailors — are jealous that I am on this carrier,” 25-year-old Garza said with a laugh. “Being on this ship, with it being a brand new classification, there is a lot of cool stuff on here.”

The Ford is the first new class of aircraft carrier designed in over four decades, ushering in a new generation of warships outfitted with never-before-seen technologies intended to boost the Navy’s striking power for at least the next 50 years. The Navy invited reporters aboard the $13 billion carrier two days after it deployed to see some of the technology in action, which includes new aircraft-launching technology, electromagnetic weapons elevators and dual-band radar. 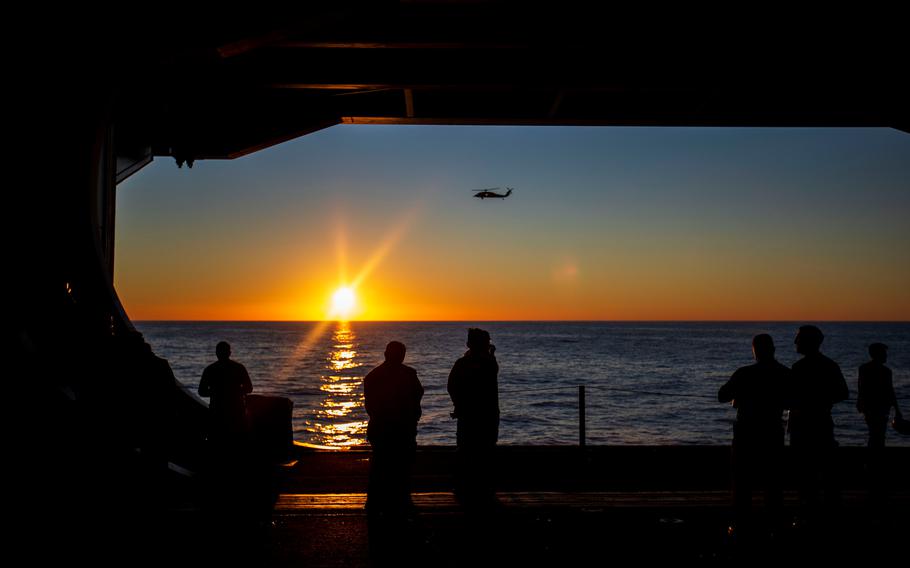 Sailors and crew members gaze out of the hangar bay at the sunset as a helicopter flies past the USS Gerald R. Ford in the Atlantic Ocean on Thursday, Oct. 6, 2022. (Kendall Warner, The Virginian-Pilot/TNS) Planes and helicopters are seen on the flight deck of the USS Gerald R. Ford in the Atlantic Ocean on Friday, Oct. 7, 2022. The Ford is the Navy’s newest and most technologically advanced warship. (Kendall Warner, The Virginian-Pilot/TNS) A plane comes in for landing on the USS Gerald R. Ford on Thursday, Oct. 6, 2022. (Kendall Warner, The Virginian-Pilot/TNS)

The warship is carrying the Navy into the 21st century, said Capt. Paul Lanzilotta.

“I don’t like buzzwords, so I’m not gonna say ‘game changer’ or ‘transformational,’ but it’s the now,” Lanzilotta said of the Ford.

The new technology extends beyond the warship’s defensive capabilities.

Below deck, the advanced damage control system allows Garza’s team to easily plot the location of fires and flooding — or anything that would threaten the survivability of the more than 1,100-foot-long carrier. That enables the Ford’s Damage Control Division to quickly dispatch sailors, whether they be hull technicians like Garza or firefighting damage control members, to the incident.

“You type it in to the advanced damage control system, then boom, it’s right there. You are able to think faster about what is needed to respond and you know exactly where you are going,” Garza said.

The easy-to-use touchscreen program replaces paper plotting across several pages of the ship’s blueprints with a grease pencil, cutting the division’s response time down by about 10 valuable minutes, Garza said. The system also allows for quick searches of necessary equipment and parts to make repairs, rather than manual searches through drawers.

Garza, who is a Norfolk transplant from Las Vegas, reported to the Ford in 2020. While she has spent the past two years learning the ins and outs of the ship, the past two months have been dedicated to mastering the advanced damage control system.

Just days into the first deployment, the system, Garza said, has already reduced vulnerabilities caused by human error and communication breaks. When someone called in a potential issue over radio, damage control members were dispatched to the wrong location on the ship.

“When they caught it from central control, plotting from the advanced damage control system, they got the right location and called us on our radios, so we were able to correct ourselves quickly,” Garza said.

Garza also works with the machinery control and monitoring system, another technology that is unique to the Ford. The system features sensors that detect flooding and when the sprinklers have been activated, and immediately alerts watchstanders.

“As soon as those sensors kick off, we are able to go do our task,” Garza said. 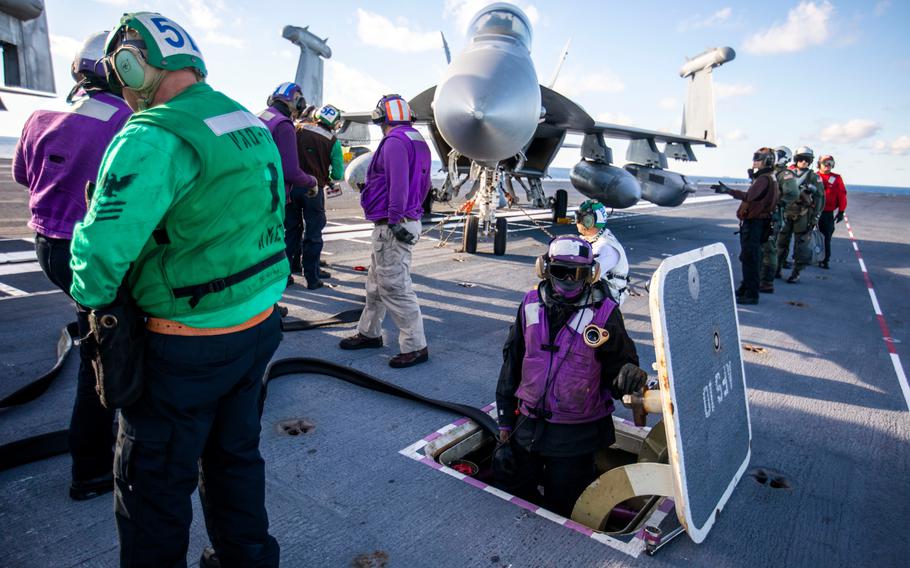 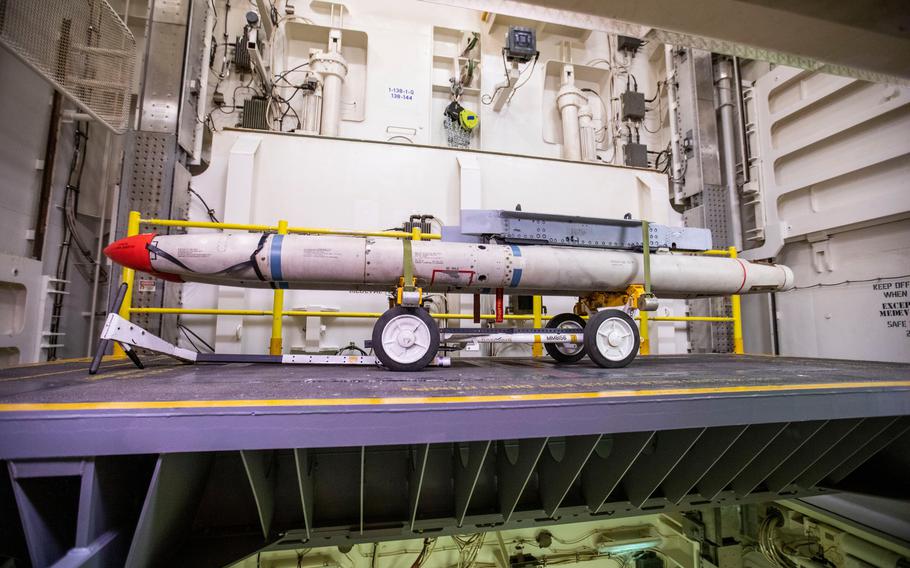 Missiles sit on the electromagnetic weapons elevator in the hangar bay aboard the USS Gerald R. Ford on Thursday, Oct. 6, 2022. The elevator is one of the new pieces of technology on the ship that streamlines the weapons-moving process and cuts down on time. (Kendall Warner, The Virginian-Pilot/TNS) 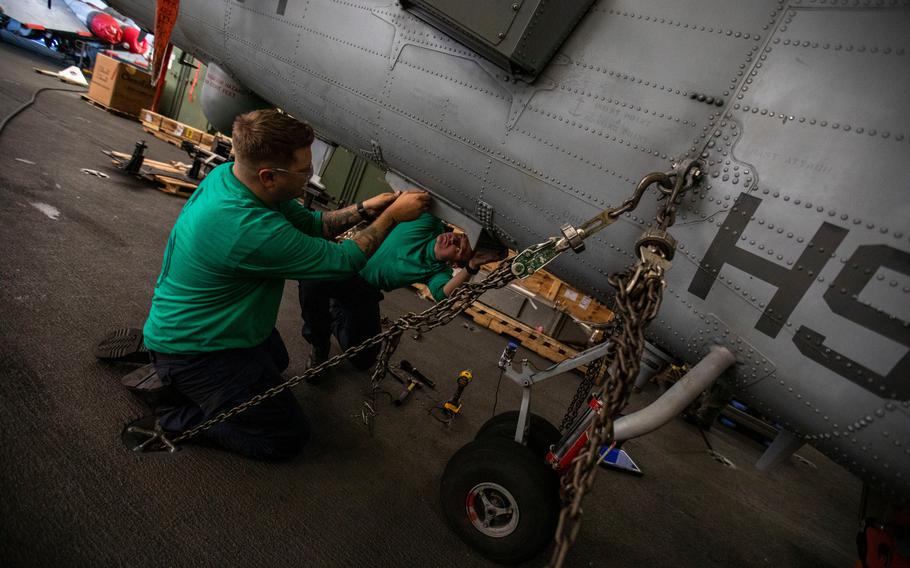 Crew members work on a helicopter in the hangar bay aboard the USS Gerald R. Ford on Thursday, Oct. 6, 2022. (Kendall Warner, The Virginian-Pilot/TNS) 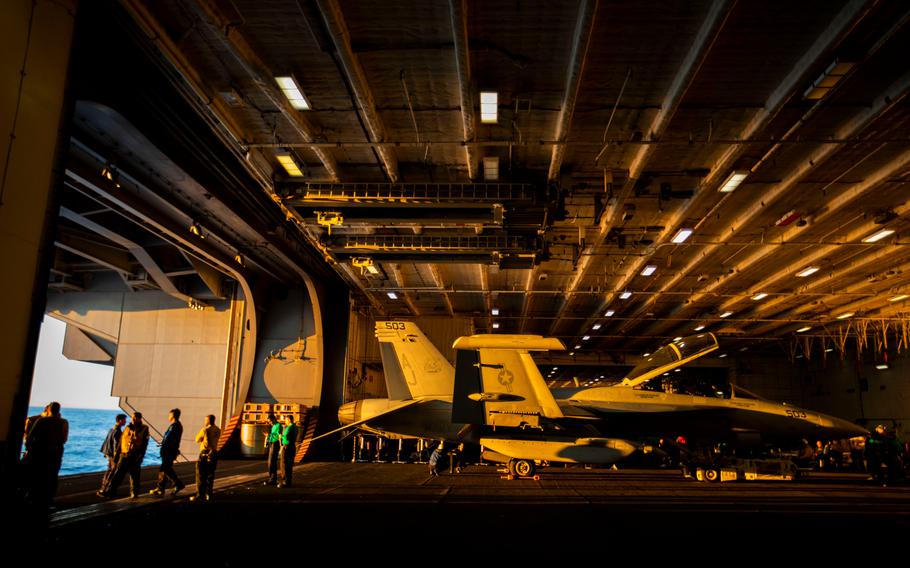 A plane sits in the hangar bay before being loaded onto the elevator to be brought up to the flight deck aboard the USS Gerald R. Ford on Thursday, Oct. 6, 2022. (Kendall Warner, The Virginian-Pilot/TNS)

The Ford is the first of a series of new carriers to be completed that will replace the current Nimitz class. It will be joined by the John F. Kennedy in 2024. The Enterprise is scheduled to join the fleet in 2028 and the Doris Miller in 2032.

Cmdr. Jim “Gun Boss” Fish said the Ford’s sailors will be instrumental in training future generations of service members for this new generation of carriers.

“There are sailors on board here who are learning about this ship. And they’re going to do and teach things about the ship that their grandkids are going to carry with them when they’re on the Doris Miller,” Fish said.

In the meantime, some of the technology that makes the Ford-class carriers so unique will be implemented in the Nimitz class warships to improve the capabilities of the Navy’s older warships. For Garza, this means she will have the opportunity to step up as a leader when she is transferred to another carrier in the coming years.

“When I go to a different type of ship I can help junior sailors. I can try to summarize (the new methods) so they understand it and I can go on to the advanced damage control system and show them how to use it,” Garza said.

According to Garza, fresh sailors will adjust quickly to the high-tech carrier because the digital systems throughout the warship replaces dated methods with a technology they are familiar with — touchscreens. At the Mid-Atlantic Regional Maintenance Center in Norfolk, where Garza was previously assigned, everything was keyboard-centric.

“When I got here, it was way easier. (The touchscreens) and how to actually use (the advanced damage control system) are super easy to understand,” Garza said.

Garza will be attached to the Ford until 2025. She said she hopes her next carrier will be a Nimitz class — “for the experience.”

“But I am so used to the Ford and the new tech, maybe I need to try for the USS John F. Kennedy,” she said.