The Navy is unprepared to fight in two conflicts at once with current fleet size, the service’s top officer tells senators 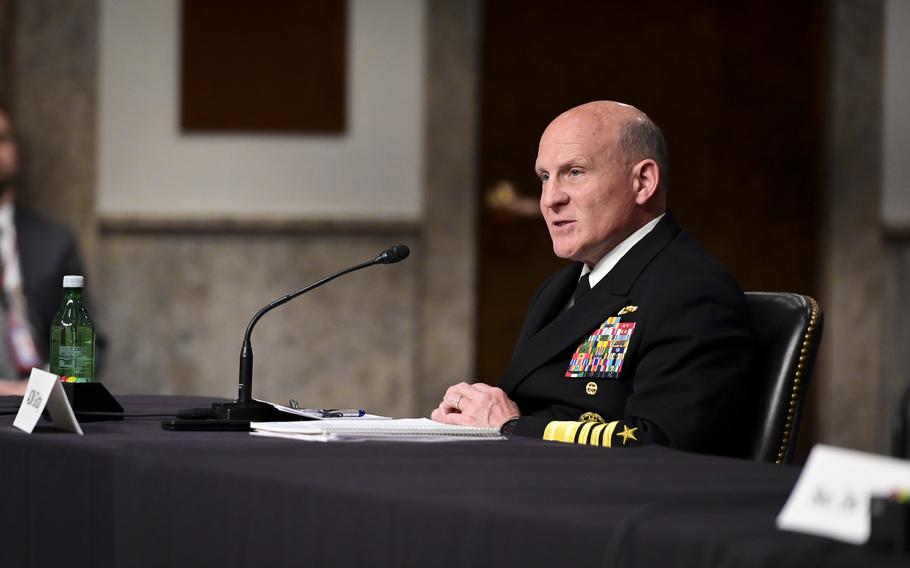 The current fleet of about 298 ships “is not sized to handle two simultaneous conflicts,” Adm. Mike Gilday, the chief of naval operations, said during a hearing of the Senate Armed Services Committee. “It’s sized to fight one and keep a second adversary in check, but in terms of two all-out conflicts, we are not sized for that.”

Though Russia’s war with Ukraine has garnered much attention in recent months, China is the top “pacing threat” for the U.S. military due to predatory practices in the South China Sea and simmering tensions over Taiwan, according to a document previewing the 2023 National Defense Strategy, which sets the Pentagon’s priorities.

With China’s persistent threat in the western Pacific region and NATO focused on Russia, the Navy’s ability to battle in simultaneous conflicts is of growing importance, said Sen. Josh Hawley, R-Missouri.

“What would the impact be on the Navy's ability to meet its operational requirements in [Europe] if we had to withhold Navy forces from Europe in order to deter Chinese aggression in [the Pacific]?” Hawley said at the hearing.

Gilday said the Navy would be “challenged” to meet both needs.

“You’d have to take a look at how you squeeze the most out of the joint force that you have and use it the best possible way,” he said.

In 2018, Congress passed a law requiring the Navy to reach a 355-ship fleet “as soon as practicable,” but the number of ships has only dropped in that time due to budget requirements. For example, the proposed 2023 Navy budget calls for adding nine new ships — but cutting 24.

By comparison, China already has 355 ships in its fleet and plans to add about 65 more within the next four years, according to the Pentagon’s annual China military report published in November. By 2030, the Chinese fleet is expected to reach 460 ships.

The Navy last month released a 30-year shipbuilding plan that included three options for growing the U.S. fleet – only one of which would allow the Navy to reach the 355-ship goal. The problem, however, is the plan’s financial requirements, Gilday said.

“We would get there with [that option], but it would require real growth in the budget,” the admiral said.

Gilday said the plan would do “a much better job” of meeting the threat in the Pacific but cautioned it would require more of the shipbuilding industry, which doesn’t always meet procurement deadlines.

“The constraint still facing [that option] is the ability of the industrial base to … actually produce those ships at pace to meet our requirements,” he said.

Hawley called it “disturbing” that only one plan comes close to meeting the operational requirements of the Navy to deal with keeping pace with China and urged fellow senators to take seriously the need for additional ships.

“If that’s not a wake-up call to the committee, I don’t know what it,” he said.