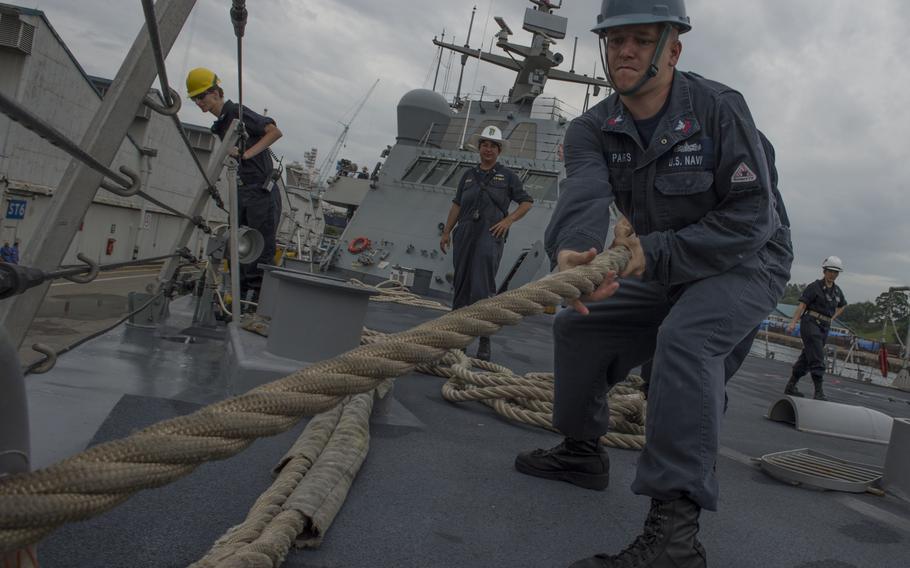 Culinary Specialist 1st Class Robert Parks from Fostoria, Ohio, heaves a mooring line aboard the littoral combat ship USS Fort Worth during a sea and anchor detail Feb. 19, 2015, in Singapore. The Navy has identified 24 ships on the chopping block in its budget proposal for 2023 released Monday, March 28, 2022. Nine are Freedom-class littoral combat ships. (Conor Minto/U.S. Navy)

The Navy also proposes reducing the service by about 620 active-duty sailors, bringing the force to about 346,300.

But the Navy wants to build two Virginia-class attack submarines, two Arleigh Burke-class destroyers, one frigate, one amphibious assault ship, one amphibious transport dock, one fleet oiler and one towing, salvage and rescue ship. The new submarines, destroyers and oiler would replace their aging counterparts of earlier ship classes that the service offered up for divestment in 2023.

The proposed new submarines are especially needed because “deterring strategic attacks” will be one of the key pillars of the upcoming new National Defense Strategy, Gumbleton said. The strategy, which typically changes with each new presidential administration, lays out the nation’s top defense priorities and security challenges.

“[Submarines are] the most survivable leg of the nuclear triad,” Gumbleton said, referring to the three legs of the Defense Department’s nuclear forces — land, air and sea.

The $180.5 billion budget represents an increase of 5% in real growth over last year’s enacted budget of $172.3 billion, accounting for inflation, Gumbleton said.

Also included in the shipbuilding budget is $1.3 billion in “cost-to-complete” funding for ships purchased in the prior year’s budget, the prices of which Gumbleton said grew due to inflation.

Whether Congress will allow the Navy to cut 24 ships and build just nine in 2023 is unclear. Last year, lawmakers ordered the Navy to build 13 ships in the fiscal 2022 budget in pursuit of a larger fleet after service leaders asked for just eight.

Rep. Rob Wittman, R-Va., spoke out against the ship cuts hours after the budget was unveiled Monday, noting the strategy “prioritizes future technologies over the capacity and capabilities service members need now.”

“I am particularly disappointed that even as we aim to grow our naval and projection forces, this budget continues the divest-to-invest strategy that will shrink our fleet once again,” the congressman said Monday.

The 2023 proposed budget would cut the most littoral combat ships, also known as LCS, in a single year to date. The Navy last year asked for four to be decommissioned, drawing questions from some lawmakers on Capitol Hill because of the ship’s relatively young age.

First launched in 2008, the ship’s first variant — the Freedom class — has been controversial after the service scrambled to fix engineering problems and establish relevant mission sets for them as national security needs changed during the past 20 years.

While cutting 24 ships might raise eyebrows, acting Undersecretary of the Navy Meredith Berger on Monday said the decision will save $3.6 billion in the next five years and was made “to help us support what is sustainable.”

“We haven't budgeted for anything that we [would] not be able to sustain, and that means making sure that we are aligning what we do have to be the most capable and ready fleet and force,” she said. “What you'll see is a more ready more lethal and more capable fleet.”

While the cuts would bring the Navy’s total fleet down to about 285 ships, the Navy maintains that its congressionally mandated goal of a 355-ship fleet remains its long-term objective, Berger said. In total, the Navy would save $3.6 billion in fiscal year 2023 by cutting all 24 ships.

“As we move those away, we're going to free ourselves of some very costly repairs and maintenance,” Berger said.