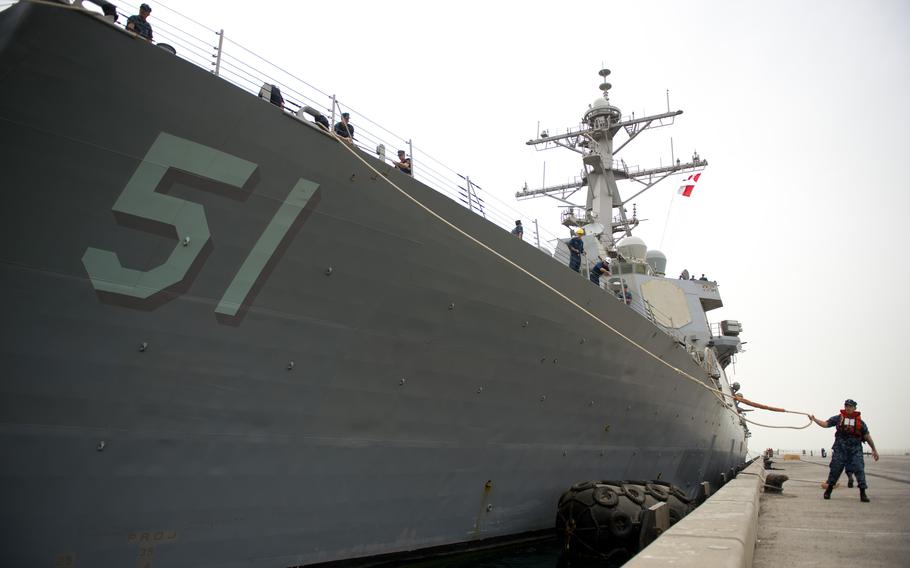 Under the Navy's long-term shipbuilding plan, it would decommission 53 vessels during fiscal years 2024 through 2027, including the USS Arleigh Burke, the lead ship of that class of guided-missile destroyers. (Carlos Vazquez/U.S. Navy)

The Navy’s long-term shipbuilding plan would increase its battle force fleet to between 327 and 367 vessels by 2052, a range based on differing scenarios of federal budgeting and shipyard capacity, according to a report submitted to Congress this month.

The 30-year plan, which would represent a roughly 10% to 22% increase in fleet size, maintains the Navy’s submarine superiority, grows unmanned vehicle capability and focuses on vessels more likely to survive in a conflict with China, according to the Office of the Chief of Naval Operations.

As of April 11, the Navy had a fleet of 298 battle force ships, according to a report earlier this month by the Congressional Research Service. The fleet has rarely exceeded 300 ships in the past two decades, reaching that number briefly in July 2020, the report stated.

The plan calls for decommissioning certain “legacy” vessels and others that do not fit with the service’s concept of so-called “distributed maritime operations,” during which sailors and Marines would fight in a widely diffused battlespace, as opposed to being concentrated in a single carrier strike group.

The Navy would decommission 53 vessels during fiscal years 2024 through 2027, including the USS Arleigh Burke, the lead ship of that class of guided-missile destroyers.

“These choices include divesting ships that provide less relevant capability to our pacing threat warfighting requirements. It also requires prioritizing promising technologies that need to be fielded quickly and at scale to be operationally relevant in the coming years.”

The plan met with a quick thumbs-down by some lawmakers in Congress, which ultimately makes final decisions on Navy shipbuilding and funding.

“Most disconcerting is that the administration may have known the depths of these reductions and decided to not provide Congress with this information, hiding it with a one-year shipbuilding plan presented to Congress last year,” Reps. Mike Rogers of Alabama and Rob Wittman of Virginia said in the release.

While the long-range plan was overdue, its goals were not entirely unexpected.

The Navy in 2016 had released a force-structure goal of 355 ships, and that number was set as policy in the 2018 National Defense Authorization Act, the Congressional Research Service report stated.

In June last year, the Navy submitted a document to Congress that floated the idea of a fleet of 321 to 372 manned ships, the report stated.

Under the first two options, described as possible under “a budget with no real growth,” the Navy would have 316 or 327 ships by 2052.

The third alternative would produce 367 ships by 2052 and require an additional $75 billion in funding, with questions remaining whether the nation’s shipbuilding industry would have the capacity to support the effort.