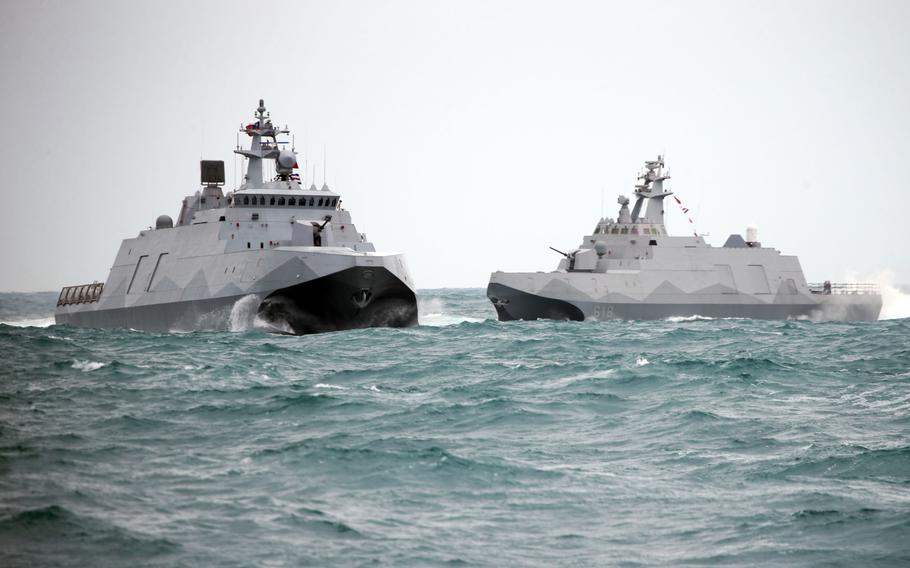 Taiwan Navy’s Tuo Chiang-class corvettes sail during a military exercise off the shore in Keelung, Taiwan, on Jan. 7. (I-Hwa Cheng/Bloomberg)

As Europe's largest conflict since World War II rages in Ukraine, top Biden administration aides are increasingly convinced it could provide the U.S. with an unexpected advantage — against China.

U.S. officials see the conflict's toll and the slew of sanctions placed on Moscow as leaving Russia hobbled for years to come. Combined with bolstered European defense spending, that means the U.S. may have a freer hand to accelerate its long-term shift toward China, viewed as America's biggest future challenge, according to several officials interviewed by Bloomberg News.

The officials acknowledge that the war's outcome is uncertain. And previous attempts to channel U.S. government attention toward Asia have ended up derailed by events in the Middle East and elsewhere, including former President Barack Obama's "pivot" to Asia.

But even with so much of the administration's bandwidth focused on Ukraine, the officials say they believe this time could be different. They and top lawmakers from both parties warn that Beijing is closely watching the U.S. and allied response to the invasion, drawing potential lessons for any tensions over Taiwan.

"The war in Ukraine could end up being bad for the pivot in the short-term, but good in the long-term," said Richard Fontaine, the chief executive officer of the Center for a New American Security and an adviser to late Republican Senator John McCain.

The move toward Asia is seen as critical, with President Joe Biden and his top aides saying China is increasingly trying to use its economic and military clout to bend the "rules-based international order" to its will, citing the country's moves to take greater control of Hong Kong, expand its presence in the South China Sea and crack down on dissent and human rights in the Xinjiang region. Chinese officials dispute those characterizations and say the U.S. should get over its "Cold War" view of the world.

Although Russia's invasion of Ukraine initially appeared to put China — which has long touted its support for "territorial integrity" — in a bind, officials in Beijing have continued to tout their partnership with Moscow.

But with the war now dragging out and Russia's military shortcomings becoming more obvious, one senior U.S. official said that a Beijing-Moscow diplomatic alliance originally viewed as a force multiplier for China increasingly looks more like an anchor.

Defense Secretary Lloyd Austin has been explicit about Washington's hope that Putin's setbacks in Ukraine will undermine Moscow. Russia "has already lost a lot of military capability, and a lot of its troops quite frankly," Austin told reporters on April 25. "We want to see Russia weakened to the degree that it can't do the kinds of things that it has done in invading Ukraine."

Surprised by the outbreak of war on the continent, European nations rushed to accelerate defense spending. And Finland and Sweden, long reluctant to join the North Atlantic Treaty Organization, have sought membership.

Even Germany, which before the war resisted both ramping up defense outlays to the 2% of GDP target set by NATO and sending modern weapons to other countries, has changed tack. If implemented, the shift would make Germany the world's third-largest military spender — up from seventh in 2020.

"If Russia emerges from this conflict as a weakened version of itself and Germany makes good on its defense spending pledges, both trends could allow the U.S. to focus more on the Indo-Pacific in the long run," Fontaine said.

Two U.S. defense officials who spoke on condition of anonymity agreed, saying that if the Ukraine crisis leaves Europe more capable of defending itself, it could free up the U.S. to do more in Asia. That would likely mean a range of actions, including shifting troops and weaponry and expanding economic and political ties across the Indo-Pacific.

The Biden administration had been taking steps to shift resources and energy toward Asia before the war.

For starters, the president and his team sought to bolster the Quad grouping with Japan, India and Australia. The U.S. also reached a controversial agreement with the UK and Australia — at France's expense — to share nuclear submarine technology with Sydney. That development was decried in Beijing, which has accused America of trying to establish an Indo-Pacific version of NATO.

With a semiconductor shortage undercutting the U.S. economy, the Biden administration moved to shore up and diversify supply lines, pressing for legislation being negotiated between House and Senate lawmakers to get more chip-making moved back to America.

The administration's focus on Asia will also be front and center when Biden travels to South Korea and Japan later this month, a trip meant to meet the nations' new leaders on their home turf as well as demonstrate unity against another national security priority: North Korea.

Despite those efforts, there's plenty that could go wrong with the administration's plans. In the short term, events in Ukraine have consumed the attention of cabinet officials and their deputies across Washington's national security apparatus. Another foreign crisis or terrorist attack could quickly erupt, drowning out efforts to look toward Asia.

Most glaringly, 16 months into Biden's presidency, the administration hasn't publicly detailed its strategy toward China, and it has shied away from promoting freer trade as a counterweight to Beijing in Asia. Officials at one point said the China policy would be shared by the end of 2021, a deadline that came and went. A scheduled speech outlining the policy by Antony Blinken last week was delayed after the secretary of state contracted COVID-19. No new date for its release has been announced.

Chinese officials are skeptical of the idea that the war in Ukraine might aid the U.S. pivot to Asia. And they aren't waiting to see how the situation unfolds. Beijing officials projected that defense spending will grow 7.1% this year, the fastest pace since 2019.

One Chinese diplomat said that increased German defense spending and a weaker Russia could end up emboldening Europe's push for what French President Emmanuel Macron has called "strategic autonomy," opening up the possibility that Europe could split with the U.S. over China ties. Another said it's too early to tell what the long-term implications of the conflict will be, but that China is ready to compete with the U.S. in Asia either way.

Not all Biden administration officials are in lockstep behind the idea that events in Ukraine will help the U.S. One senior official said there's still potential the U.S. will double down on Europe at the expense of Asia, a tendency that could be reinforced by Ukraine. The person said the still-uncertain outcome of the conflict will be crucial to determining what happens.

Even if Russia — which has faced major downturns in the past including the collapse of the Soviet Union and an economic crisis in the late 1990s — emerges from the Ukraine war weaker, it will remain a nuclear power, one with a predilection for unpredictable behavior.

China "doesn't need a strong Russia, they just need a surly Russia that keeps the U.S. worried," said Daniel Russel, a former assistant secretary of State for East Asian and Pacific Affairs in the Obama administration. "You'd have to believe that Putin was going to stop being a serious mischief maker to believe that leaving Putin management to Germany would be plausible."