The Navy is training for a possible fight with China, but Cold War comparisons may not apply, experts say 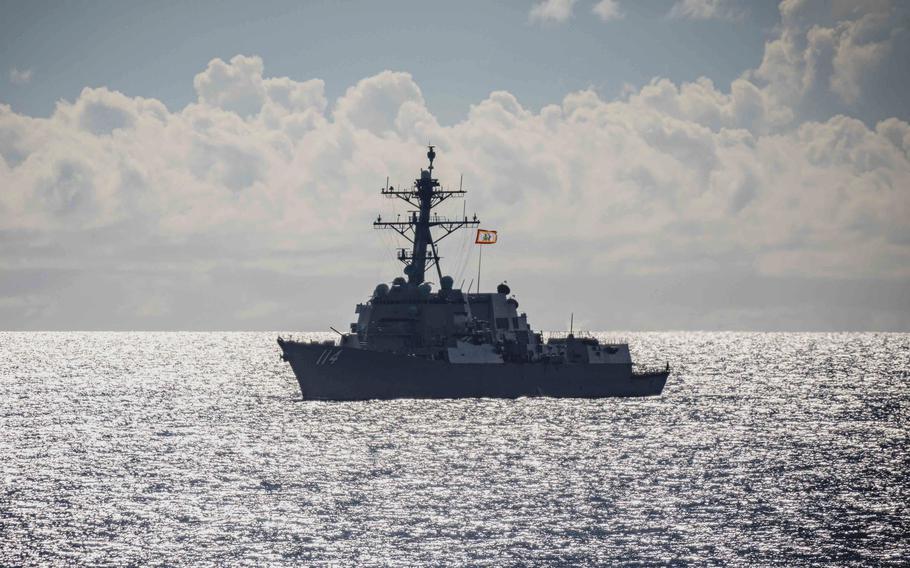 The guided-missile destroyer USS Ralph Johnson, shown here in December 2020, made a trip through the Taiwan Strait on Feb. 26, 2022. (Markus Castaneda/U.S. Navy)

SAN DIEGO (Tribune News Service) — For much of the past year, U.S. Navy and Marine Corps in the Pacific have trained for a conflict with the Pentagon’s most powerful potential adversary, China.

Now the invasion of Ukraine by Russia — another “near peer” nation and newly aligned partner of China — has raised the stakes of such exercises and stoked fears among some that a Pacific confrontation might be closer than expected if China makes a similar move against Taiwan.

But national security experts cautioned against drawing too broad an association based on Cold War comparisons and the “unlimited” partnership that China and Russia announced upon the start of the Beijing Winter Olympics. In that agreement, the two nations signaled support for each other’s stated policy goals toward their neighbors, with China stating its opposition to NATO expansion into Ukraine and Russia saying it opposes Taiwanese independence.

That is not a military alliance akin to the U.S.-led NATO alliance in Europe, analysts pointed out. And the two Asian superpowers have a complex relationship with different priorities.

The united response of the worldwide democratic economic order to Russia’s invasion of Ukraine presents a monumental challenge for China, said Elizabeth Wishnick, an expert in Chinese and Russian foreign policy at the Center for Naval Analysis.

Wishnick said there are indications Chinese officials were surprised at the support Ukraine received from countries around the world even though it is not a member of NATO. The swift international reaction, as well as Russia’s difficulty in achieving its military objectives, are a lesson for China, she said.

“I think China’s in a very difficult spot here,” Wishnick said. Chinese President Xi Jinping “is very connected to this partnership with Russia which is showing itself to be extremely troublesome.”

China has undergone a decadelong buildup of its military — especially its Navy. That new threat is reflected in recent activity of the 7th Fleet, including two aircraft carriers and other ships based in San Diego.

Navy leaders pointed to the recent deployment of the San Diego-based Carl Vinson Carrier Strike Group to the region as an example of shifting American military priorities. For the first time in almost 20 years, a U.S.-based Pacific carrier deployment did not conduct operations in the Middle East, instead focusing on the busy international shipping corridors of the South China Sea, which China claims as its own territorial waters.

Last summer, the U.S. military held a global “Large Scale Exercise,” which Adm. Mike Gilday, the chief of naval operations, called the biggest such exercise in “a generation.”

The exercise spanned 17 time zones, included dozens of units at sea and more than 50 ashore. While the Navy said the exercise had “no link” to a specific or current geopolitical situation, it was based on scenarios the Navy and Marine Corps could face in the future.

Navy commanders — including Gilday and the civilian head of the Navy department, Sec. Carlos Del Toro — led the classified game with U.S. allies in November to assess the service’s future needs should a conflict erupt. While the details of the game were classified, Gilday and Del Toro told reporters when it ended that the game gave them a “good sense” of how the U.S. would fare in a fight with its new types of naval ships, such as littoral combat ships, and new unmanned ships and aircraft.

“As a department, we are clearly focused on the Pacific,” Gilday said during the Nov. 17 conference call with reporters. 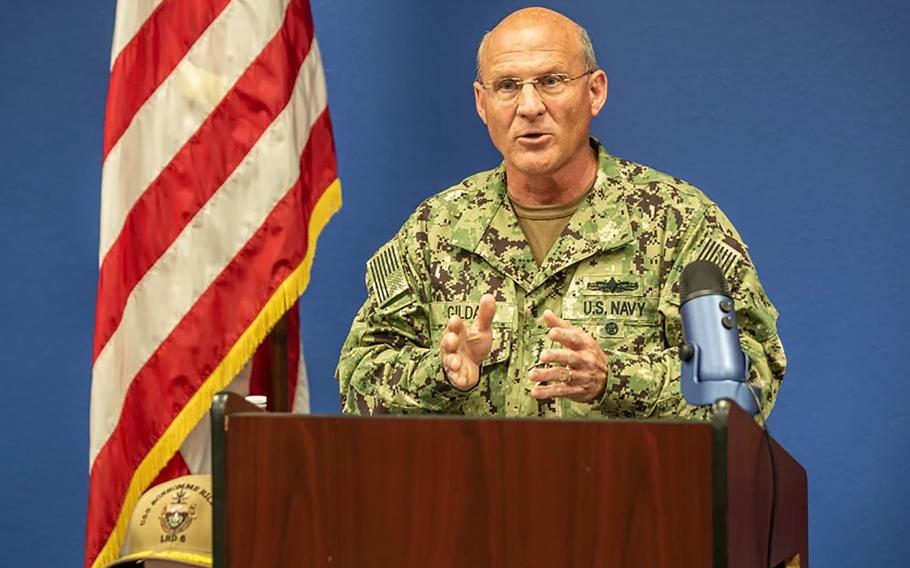 Del Toro compared the game with those held in the 1930s to assess how then-new carriers and submarines would fare in a fight. The strategic thinking that came out of those exercises was valuable, he said. Now, with the U.S. Navy training to counter another powerful navy — rather than the ship-to-shore attacks of U.S. wars in the Middle East — and new advanced Navy weapons platforms, the games offer a similar value.

“We are now looking at the many new technologies we have that will come online over the next two years,” Del Toro said at the time. “Navy and Marines will be able to stand up to any adversary we face over the next few years.”

Recent Navy activity in the Western Pacific and messaging from the service focus on its operations in the region. In January, two San Diego-based aircraft carriers, the Carl Vinson and the Abraham Lincoln, conducted dual-carrier operations with their respective air wings — both of which involved the service’s newest fighter, the F-35C Lightning II.

The ships also participated in training with allied navies, such as those of Great Britain and Japan.

Renewed Russian aggression in Europe, as well as its partnership with China, has some wondering whether the U.S. is in the midst of a second cold war.

Gregory Daddis, a retired Army colonel who now serves as the director of the Center for War and Society at San Diego State University, is a military historian who specializes in the Cold War. Daddis told the Union-Tribune that while there are parallels, the world is a much different place than it was a half-century ago.

“This is not a new Cold War,” she said, citing the globalized economy and other global problems — such as climate change — that China wants to play a part in solving. “China wants to have a seat at the table.”

Daddis questioned whether the focus on countering China militarily is distracting the U.S. from more pressing domestic threats to democracy in addition to the threat of climate change.

“Our inability so far to deal with climate change may in fact be a greater threat than China,” Daddis said. “If we’re still using Cold War models to define threats to U.S. national security I might argue that those models might be somewhat outdated.” 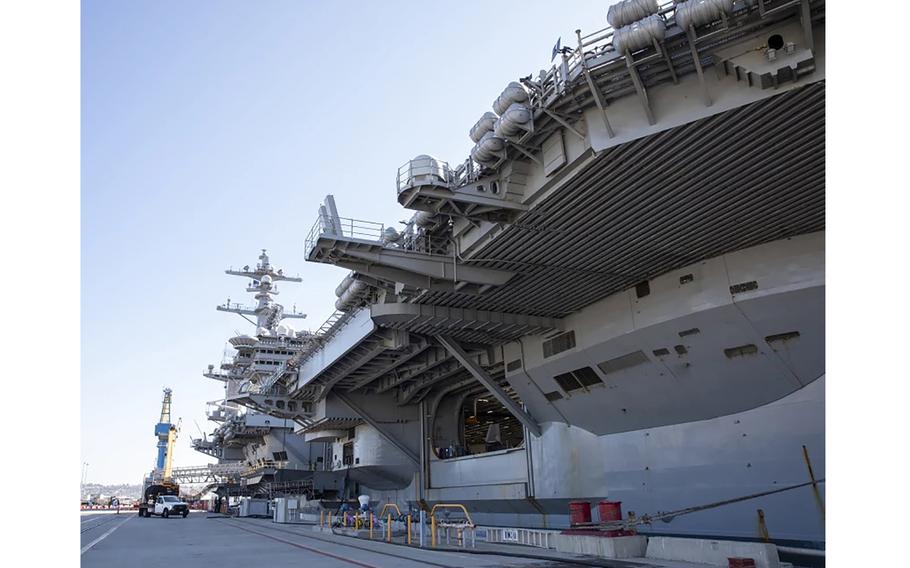 If there was an understanding between China and Russia going into the Ukraine invasion, the results so far may have given China pause.

Last week, the New York Times reported that a Western intelligence report said senior Chinese officials told Russia to delay its invasion of Ukraine until the end of the Winter Olympics. A Chinese Foreign Ministry spokesperson told reporters a day later the report was “fake news.”

Wishnick said that Chinese staffing at its Ukraine embassy were told not to evacuate ahead of Russia’s attack, suggesting the China did not expect the invasion to become bogged down.

There are those in China who see an opportunity with the U.S. distracted by Russia, Wishnick said. But Xi is seeking a third term as leader of China’s Communist Party this fall — in defiance of precedent — and will be seeking stability until that process plays out. She doubts Xi will ramp up China’s aggression toward Taiwan or in the South China Sea, after seeing the economic sanctions and worldwide condemnation aimed at Russia.

“I don’t think this is going to be an opportunity for some two-front war or (for) adventurism in Taiwan,” she said.

Daddis said it’s unlikely anything will change in the Western Pacific until the consequences for Russia are better understood.

“My sense is that Chinese policy makers will want to see first how invasion and sanctions affect their economy before making any moves,” he said. “The problem is, with war, there’s always potential for miscalculation and unintended consequences.”