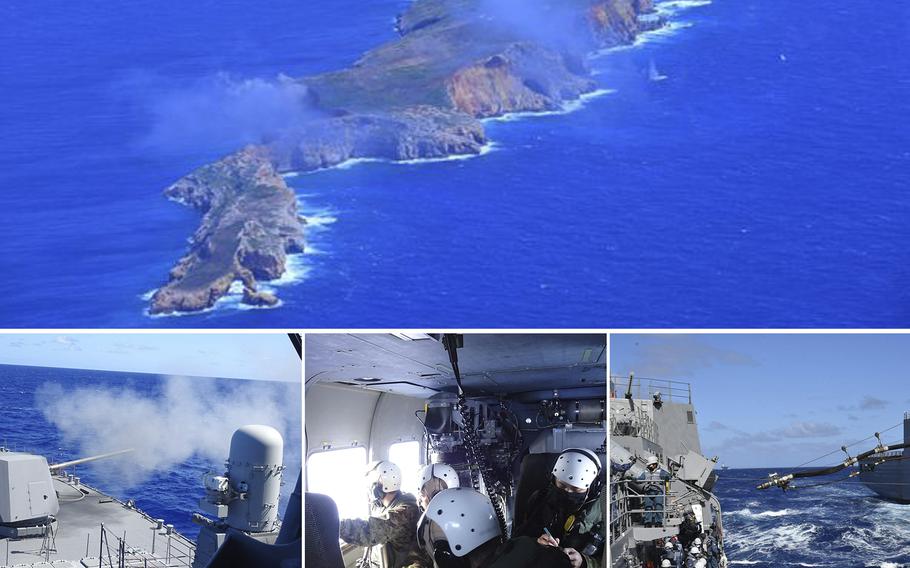 A combo photo posted on Friday, March 4, 2022, shows Japanese Maritime Self Defense assets conducting a bilateral exercise with the U.S. Navy and the U.S. Marine Corps to strengthen the capability of the Japanese-U.S. Alliance for effective deterrence and response.. (Facebook/Japan Maritime Self-Defense Force)

Japan this week announced it would accept refugees from Ukraine and send bulletproof vests to Kyiv - extraordinary measures taken by one of the countries least welcoming to refugees and also has a self-imposed arms exports ban because of its militaristic past.

They were decisions made without "gaiatsu," or foreign pressure, several Japanese officials note, underscoring Japan's determination to show it will not stand for Moscow's behavior, a stance that defies the pacifist values that undergird postwar Japanese identity.

Russia's troubling actions - most recently its attack on a Ukrainian nuclear power plant - have triggered a deep alarm that is likely to accelerate Japan's debate over defense and security policies that had been underway amid China's growing territorial threat.

The perilous international situation has raised urgent questions about Japan's readiness and crisis management capabilities under its war-renouncing constitution, and has brought Japan closer than ever to significantly raising its defense spending - a long-standing and controversial debate - as a part of its national security policy review this year.

Shiozaki pointed to the shift on refugees as an example of one of those aspects of preparation. "In considering future crisis scenarios in East Asia, including the Taiwan contingency, it is necessary to build and maintain the capacity to respond to refugees in times of emergency, even in peacetime," he said.

Although the invasion has reconfigured the security landscape in Europe within a matter of days, the full impact in the Indo-Pacific region remains to be seen, and experts are debating whether the invasion of Ukraine will mark a turning point for Japan's postwar security policy in the same way that the 1991 Persian Gulf War rattled Japan's diplomacy and national security policy.

Japan is closely watching Germany, a World War II ally that also adopted pacifist policies as a legacy of its wartime aggression. Germany has made seismic moves in response to the Russian invasion, upending decades of societal consensus on defense spending, direct intervention in wars and the nature of country's ties to Moscow.

"Japan is watching now, very much attentively, how Germany is responding to the Ukraine crisis and how fundamentally Germany is transforming to adapt itself to new reality," said Yoichi Funabashi, the chairman of the Tokyo-based think tank Asia Pacific Initiative and a former editor in chief of the Asahi Shimbun newspaper.

Four days after the attack, German Chancellor Olaf Scholz announced a vast increase in defense spending, which appears to be backed by a public that had long been as indifferent as its political leaders to the country's failure to meet NATO spending commitments.

Scholz had already approved the delivery of weapons to Ukraine over the weekend - a move that also broke with long-standing tradition and could have ripple effects across the European Union.

When asked at a recent news conference whether Japan plans to ramp up its defense spending, Prime Minister Fumio Kishida answered that "Japan needs to implement a fundamental upgrade of its defense capabilities."

In just the past week, Japan has taken uncharacteristically swift steps to join Western allies in financially pressuring Russia and Belarus and aiding Ukraine. Tokyo committed more than $200 million of support for Ukraine and issued sanctions targeting Russian oligarchs and banks as well as top Belarusian officials. It also diverted at least 210,000 tons of surplus liquefied natural gas to Europe to make up for a possible disruption of energy supplies from Russia.

"Prime Minister Kishida has stepped up and stepped onto the global stage in a significant way," U.S. Ambassador to Japan Rahm Emanuel said in an interview. "Japan is responding on a global scale with the speed we have not seen, and is making a difference. It has made the opposition to Russia a global one, not just European."

Japan's assertive steps were made possible by the years of effort by Prime Minister Shinzo Abe, who worked to deepen Japan's ties with Europe and with countries throughout the Indo-Pacific region, experts say. Those efforts increased when the United States retreated on the global stage during the "America First" Trump era, when Japan began to more clearly articulate its values and foreign policy positions in the relative absence of its security ally.

Japan is reaping the benefits of investing in its European diplomacy in those years, particularly as it took a more assertive role in sustaining the postwar order in Washington's absence, said Sheila Smith, a Japanese foreign policy and politics expert at the Council on Foreign Relations.

Many in Japan say the country's actions underscore its resolve to remain a steadfast U.S. ally despite its shock over President Joe Biden's withdrawal of American forces from Afghanistan, and despite the United States' pulling out of a major trade agreement that it brokered in the Asia-Pacific region - only to return with a vague economic "framework" that has yet to be defined.

"Japan has gradually started to learn how to be vocal, how to really articulate its values, position our diplomacy, particularly throughout the Trump administration for four years, because Japan has had to," said Funabashi, the AP Initiative chairman. "Finally, proactive diplomacy has started to emerge."

Japan's approach has been a dramatic shift from 2014, when Russia annexed Crimea and Japan only reluctantly agreed to join the West on sanctions out of concern for its rapprochement with Russia to resolve a long-standing territorial dispute.

For now, Japan has put those efforts on hold. The Russian invasion has deepened Japan's fears that without a strong response alongside the Group of Seven major economies, it risks emboldening China's growing assertiveness and the worsening of relations between China and the island of Taiwan.

"This is the occasion to show our solidarity, and if we let these kind of things happen, our neighbor - Russia's neighbor, as well - may take such action as well, that can change the status quo, and that's not what we want to see," said Ichiro Fujisaki, a former Japanese ambassador to the United States. "I'm talking about China, of course."

The Japanese public's outpouring of support for Ukrainians also marks a shift from previous crises, including the Afghanistan withdrawal, and provides domestic support for Japan's assertive approach, said Smith, the Council on Foreign Relations expert.

"It helps the government's foreign policy efforts to have this deep sympathy for Ukraine within Japanese society," she said.

The Washington Post's Rick Noack in Paris contributed to this report.