US visit signals support for Taiwan after Ukraine invasion 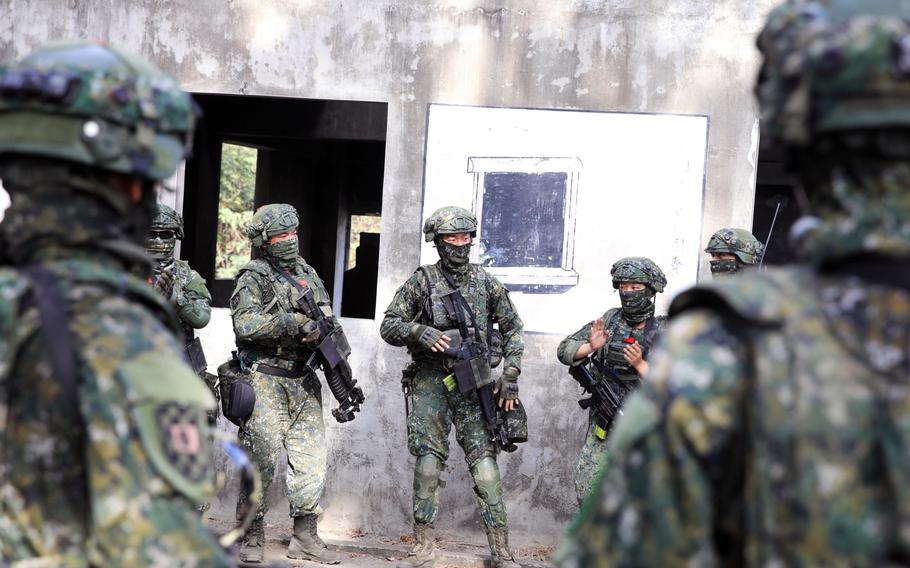 The U.S. is signaling its support for democratically run Taiwan with a visit by former national security and defense officials, a trip that comes as Washington heaps sanctions on Russia for its invasion of Ukraine.

A delegation that includes former chairman of the Joint Chiefs of Staff Michael Mullen and ex-undersecretary of defense for policy Michèle Flournoy arrived in Taipei on Tuesday afternoon, the semi-official Central News Agency reported.

They’ll meet President Tsai Ing-wen on Wednesday to discuss a range of international issues, including relations between the two sides, the Presidential Office in Taiwan said in a statement. They will also attend a dinner reception later in the day.

Tsai last week downplayed worries that Russia’s attack could trigger a crisis in Taiwan, which Beijing claims as its territory to be taken by force if necessary. She also warned the public about “external forces” using fake information about the situation in Ukraine to sow panic about a possible Chinese threat to the island.

“The dispatch of a delegation of former officials to Taipei is intended to send a message of reassurance about U.S. support for Taiwan’s security,” said Bonnie Glaser, director of the Asia program at the German Marshall Fund of the United States. “The signal to Beijing is that the U.S. is not distracted by Russia’s invasion of Ukraine, and the U.S. has a strong stake in the preservation of peace and stability in the Taiwan Strait.”

“President Biden sending this senior delegation to Taiwan at this time of great change in the world shows the significance of U.S.-Taiwan ties and Taiwan’s status, as well as the fact that the U.S. highly values regional peace,” he said in the legislature in Taipei.

Su also said that central bank has enough U.S. dollar liquidity to keep the local currency “dynamically stable” in the event of large fund outflows. Foreign investors have been net sellers of local stocks in recent sessions amid investor concern over the fighting in Ukraine, helping send the Taiwan dollar to its lowest close since mid-October last week.

Chinese Foreign Ministry spokesman Wang Wenbin said at a regular press briefing Tuesday that the U.S. should “stop all forms of official interaction with Taiwan, and handle Taiwan-related issues in a prudent manner lest it should further undermine the larger interests of bilateral relations and peace and stability across the Taiwan Strait.”

“The Chinese people are firmly determined to defend national sovereignty and territorial integrity,” he said.

The U.S. visit comes as Taiwan makes its own gesture of support for Ukraine. A flight containing 27 tons of medical supplies for Ukraine departed from Taoyuan airport Monday night bound for Frankfurt, according to a statement from the Foreign Ministry.

Officials in Taipei see the risk of China launching an imminent attack some 160 km (100 miles) across the Taiwan Strait as low. That’s because Beijing wants stability before a congress of the ruling Communist Party later this year that is likely to hand President Xi Jinping a precedent-busting third term in power and also because the People’s Liberation Army is seen as lacking the capabilities to guarantee the success of any venture.

Still, China has maintained its military pressure on Taiwan in recent days. Taiwan detected nine Chinese military aircraft off its southwest on Feb. 24, the day Russia mounted its attack on Ukraine. Then on Feb. 26, the U.S. Navy sent a destroyer through the strait.

The Seventh Fleet said in a statement that the move was intended to show the U.S. commitment to a free and open Indo-Pacific.

Wen-Ti Sung, a lecturer in Australian National University’s Taiwan Studies Program in Taipei, said another item on the U.S. delegation’s agenda could be explaining to officials how the island fits into the Biden administration’s new strategy for the region.

Washington unveiled that plan last month as it seeks to strengthen its role in the region to counter what it sees as the growing threat posed by China.