US sees China watching Ukraine crisis as proxy for Taiwan 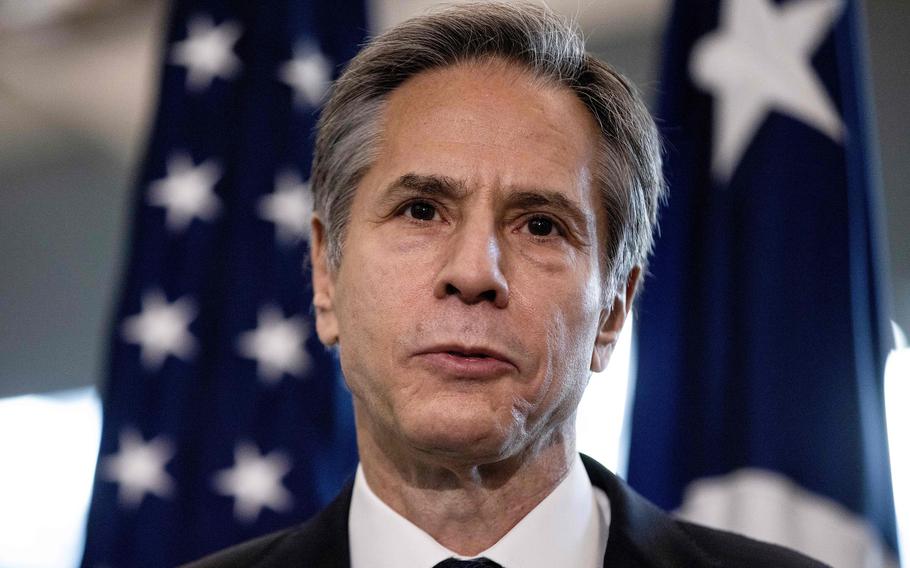 Newly confirmed U.S. Secretary of State Antony Blinken speaks during a welcome ceremony at the State Department in Washington, D.C., on Wednesday, Jan. 27, 2021. Blinken’s decision to go forward with plans to visit Australia in the middle of February, 2022, despite surging Russia-Ukraine tensions was driven by a couple of issues. (Carlos Barria/AFP)

WASHINGTON (TNS) — The Biden administration increasingly believes that China is gauging the U.S. response to the Ukraine crisis as a proxy for how America would deal with more aggressive action by Beijing against Taiwan, according to three senior officials.

Secretary of State Antony Blinken’s decision to go forward with plans to visit Australia this week despite surging Russia-Ukraine tensions was driven by a couple of issues. One was to emphasize that the administration’s efforts to reorient its policies toward Asia won’t be deterred even by the prospect of war in Europe.

The other came from a recognition that America’s longer-term security interests in the Indo-Pacific — where it has sought to bolster new alliances — are also tied to how effectively it can respond to crises elsewhere, according to the officials.

“Others are watching, others are looking to all of us to see how we respond,” Blinken said Friday at a news conference in Melbourne, without naming China directly, after meeting his counterparts from Australia, India and Japan.

The “others” aren’t just policy makers in China. Taiwan President Tsai Ing-wen has ordered her government to monitor the situation in Ukraine and its potential impact on the security of the self-governed island, which is claimed by Beijing but bolstered by billions of dollars in weapons sales from the U.S.

And after Beijing’s actions to tighten control over Hong Kong the past two years, Taiwan has witnessed a surge in Chinese military flights intruding in its air-defense identification zone. The island is now seen by many in Washington as Beijing’s next target in the years ahead, a contention that President Xi Jinping’s government has rejected.

The American officials said they believe Xi’s government is studying the cohesion of the NATO alliance as it seeks to push back on Russian President Vladimir Putin’s massing of forces near Ukraine’s border. Although Putin has said he has no intention of invading Ukraine, the standoff has emerged as the biggest crisis to face the North Atlantic Treaty Organization since the Balkans conflict in the 1990s.

There have been some cracks in U.S.-European unity, largely over the scope of sanctions that should be imposed on Russia if it invades, or undertakes something short of war to destabilize or otherwise undermine Ukraine. But broadly, the trans-Atlantic alliance has rallied to show a united front.

That aspect of the crisis is of particular interest in Beijing, given American efforts to boost the Quad bloc of the U.S., India, Japan and Australia as well as the creation of Aukus, a partnership of the U.S., U.K. and Australia. The U.S. also wants to ensure that Beijing and other rivals don’t see last year’s chaotic withdrawal from Afghanistan as a more relevant model for how the U.S. will respond in a future crisis.

In addition to striking a deal last year with the U.K. to sell more advanced nuclear submarine technology to Australia, the U.S. announced Thursday approval for the sale of many as 36 new F-15 fighter jets to Indonesia, bolstering ties with a key partner in the region. The administration also unveiled its Indo-Pacific strategy on Friday, and Biden is set to host leaders from Southeast Asian nations in Washington in the coming weeks.

The ever-closer relationship between Xi and Putin is also fueling concerns within the White House, with an official saying the CIA is closely reviewing a joint statement of more than 5,000 words the two leaders issued last week after meeting in person, on the sidelines of the Winter Olympics, for the first time in more than two years.

While Moscow and Beijing have long had overlapping interests, it’s often been a relationship of convenience more than a true partnership. Nevertheless, the document, which hailed an alliance with “no forbidden zones” between the countries, appeared to represent a call for each nation to establish spheres of influence in their regions, one official said.

Still, ensuring that U.S. policy doesn’t end up sidetracked will be no easy task. Even as Blinken undertook his four-leg journey across the Pacific this week, he fielded calls from foreign counterparts and national security officials in Washington about the situation in Ukraine.

“We continue to see very troubling signs of Russian escalation including new forces arriving around Ukraine’s borders,” Blinken said at a news conference in Fiji on Saturday. Allies and partners “have a remarkable level of unity and common purpose” in relation to Ukraine, he said.

Canceling the trip wasn’t in the cards.

From the president on down, U.S. officials are acutely aware that events in the Middle East and elsewhere have often derailed U.S. efforts to focus more attention on Asia, and they are determined not to let that happen again, one official said.

Blinken met with Pacific Island leaders in Fiji on Saturday. While China wasn’t on the official agenda, Fiji has become an important port-of-call for U.S. Navy ships plying the Pacific. The issues discussed — including pushing back on illegal fishing — are ones that many island nations see as part of China’s increasingly broad reach across the region.