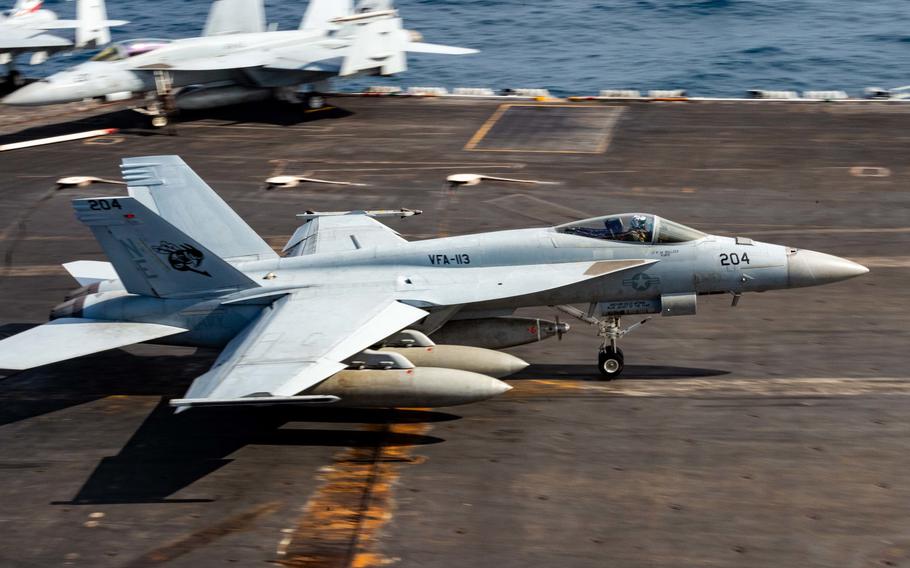 The U.S. Navy began drills in the South China Sea over the weekend that brought together two aircraft carriers, numerous warships and thousands of sailors and Marines in a potential hot spot.

“Operations like these allow us to improve our combat credible capability, reassure our allies and partners, and demonstrate our resolve as a Navy to ensure regional stability and counter malign influence,” Rear Adm. J.T. Anderson, commander of the Abraham Lincoln’s strike group, said in the release.

The exercise’s exact location was not disclosed, but 7th Fleet spokeswoman Cmdr. Hayley Sims said in a Tuesday phone call that it took place in international waters.

The exercise was marred Monday when a Navy F-35C Lightning II fighter jet crashed while attempting to land on the Carl Vinson. Seven sailors, including the pilot, were injured, according to the Navy. Four were treated aboard the carrier, and three required medical evacuation. All seven were in stable condition, the Navy said in a Monday statement.

However, Sims said, the Sampson was in Tonga on Tuesday providing disaster relief in the wake of a Jan. 14 volcanic eruption and tsunami, and the Fitzgerald was visiting its former homeport at Yokosuka Naval Base, Japan.

The ships represent a force of more than 14,000 sailors and Marines, according to 7th Fleet.

The 7th Fleet routinely exercises in the South China Sea, a stage for increasing tensions between the United States and China.

The region’s last multicarrier operation took place in October near Taiwan in the Philippine Sea and involved the Carl Vinson, the USS Ronald Reagan and the United Kingdom’s HMS Queen Elizabeth.

Beijing claims nearly all of the South China Sea as its territorial waters, including numerous contested island chains also claimed by other nations such as Vietnam, the Philippines and Taiwan. China frequently condemns the U.S. and its allies for military actions in the region, while the U.S. maintains it abides by international law.

China’s Ministry of Foreign Affairs had not commented on either exercise as of Tuesday.

Taiwan, on the northern limit of the sea, is considered a renegade province by Beijing, which seeks its reunification, by force, if necessary. The Chinese flights are considered a means of wearing down its air force.