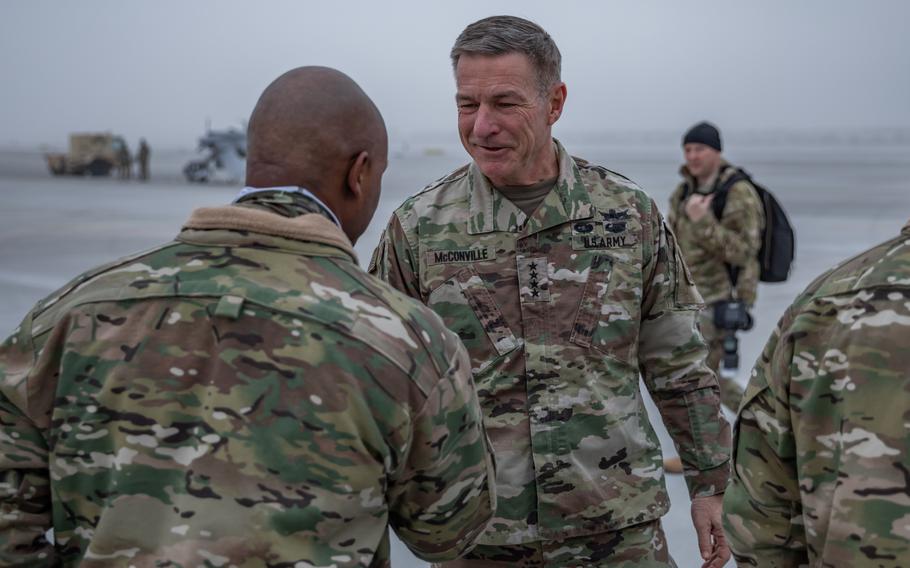 WASHINGTON — The Army’s top general warned Wednesday that lowering entry requirements for recruits is dangerous as the U.S. military looks for ways to attract troops who want to serve and can pass the physical and academic tests.

Gen. James McConville, the Army’s chief of staff, said the challenges to increase recruiting numbers are formidable. By the end of 2022, the Army was hoping to have 473,000 troops, but ended up with about 465,000 after lowering its goal twice.

It’s not just the Army. The other service branches are also having difficulty finding recruits who can meet physical and academic requirements.

To join the Army, a recruit must be between the ages of 17 and 35, medically and physically fit, and in good moral standing. Further, they must be a high school graduate, or the equivalent, and pass the Army’s placement exam known as the Armed Services Vocational Aptitude Battery test. According to Pentagon data, 23% of Americans between the ages of 17 and 24 meet all eligibility requirements.

“We are facing unprecedented challenges recruiting new soldiers. Among a myriad of causes, America’s youth are less qualified for service than ever before,” said Army Brig. Gen. Patrick Michaelis, commander at Fort Jackson, S.C. “Since the all-volunteer force was established in 1973, this is the hardest Recruiting Command has had to work to meet recruiting goals.”

Army officials have said the coronavirus pandemic has also made recruiting more difficult, as ASVAB test scores are down almost 10% since the start of the crisis.

“They just can’t pass it,” McConville said. “It’s harder for people today to pass it than it was before.”

He also pointed to a university study done that found about half of high school ROTC students are also failing the ASVAB test. But despite these recruiting hurdles, he said he remains opposed to relaxing entry requirements because the standards are there for a reason.

“This could be a very dangerous time and unimaginable things can happen,” McConville said, stressing the importance of troops’ intellect and physical capabilities during conflict.

“What we are not willing to do is … we don’t want to lower standards,” he said, noting Defense Secretary Lloyd Austin shares his opinion. “We think that quality is more important than quantity.”

“What we are willing to do is we’re willing to invest in young men and women. We have started what we call the Future Soldier’s Prep Course at Fort Jackson, and we’re getting ready to stand one up at Fort Benning [in Georgia].”

The pilot prep course started last year and its chief goal is to train young Americans to pass the entry requirements when they’re ready to join. To test its effectiveness, the Army put about 3,000 young men and women through the prep course and saw remarkable improvement.

“It got about a 95% success rate. Either they are improving their scores or they are losing body fat,” McConville said. “When they go into initial military training, they have got a heads up on their peers.”

He said the prep course could save the Pentagon money by helping to weed out recruits before they get to the stage where the military starts investing in their futures.

“I think we are going to have to do this if we don’t want to lower standards,” McConville said. “We want to give people an opportunity to do great things.”

“In fact, we want them to be all they can be,” he added, harking back to the Army’s “Be All You Can Be” slogan from the 1980s and 1990s — a slogan so fondly remembered that the service is bringing it back in 2023 as part of its evolving recruiting plans.

Another avenue that the Army wants to follow, McConville said, is finding recruits in families that don’t have a lot of military connections. He emphasized more than 80% of recruits have traditionally come from military families.