Sgt. Maj. of the Army Michael Grinston speaks with soldiers during a town hall meeting at Kadena Air Base, Okinawa, Monday, Nov. 21, 2022. (Frank Andrews/Stars and Stripes)

KADENA AIR BASE, Okinawa — Behavioral health care isn’t a one-size-fits-all answer for soldiers who are struggling emotionally, the Army’s top enlisted leader suggested during a town hall meeting at Kadena this week.

The active-duty Army had 176 soldiers die by suicide in fiscal year 2021, the Department of Defense reported earlier this year. That’s a 35% increase in five years.

Meanwhile, sexual assault reports in the Army increased 25.6% during fiscal 2021, the Pentagon announced in September. The Navy saw a 9.2% increase while the Air Force and Marine Corps both saw 2% increases.

These issues, along with Army recruitment and Russia’s invasion of Ukraine, were on the minds of soldiers attending Monday’s meeting with Sgt. Maj. of the Army Michael Grinston at Kadena’s Keystone Theater.

One soldier asked Grinston to share some advice for those having a hard time being stationed so far from their loved ones.

The sergeant major, who said he hosts a monthly meeting with his team that focuses exclusively on sexual-assault and suicide prevention, responded that leaders shouldn’t automatically refer every struggling soldier to behavioral health services. It’s important to spend time with them, Grinston said.

“There has to be something between ‘I’m struggling with something’ and ‘go see behavioral health,’” he said. “Have lunch with your squad. But it can’t just be your squad, your family or being part of a sports team — you must have multiple connections. If your only connection is behavioral health, I think you’re in a bad way.” 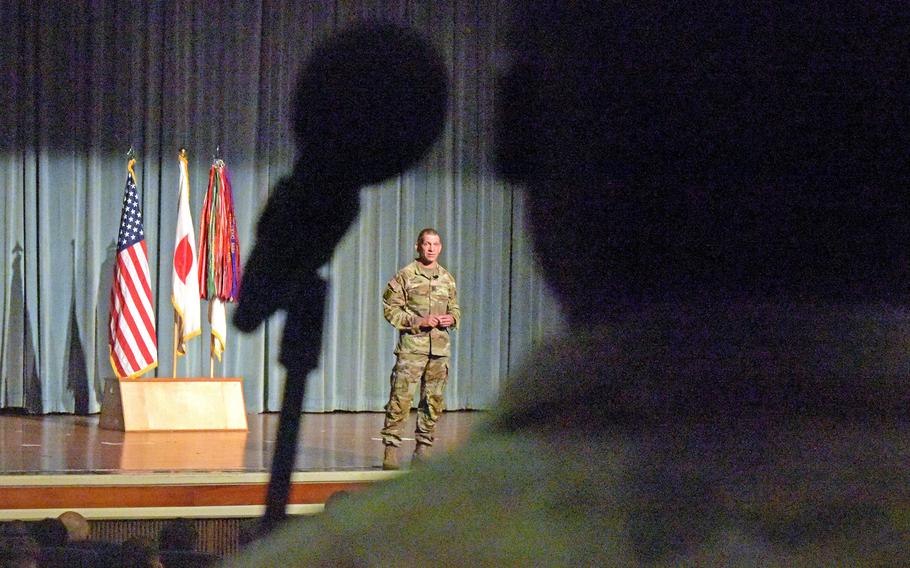 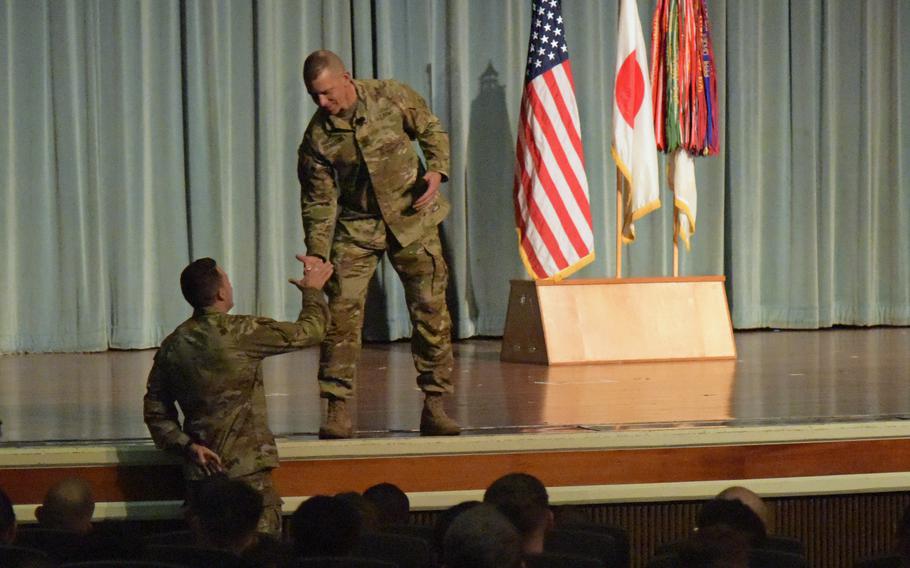 Sgt. Maj. of the Army Michael Grinston greets a soldier during a town hall meeting at Kadena Air Base, Okinawa, Monday, Nov. 21, 2022. (Frank Andrews/Stars and Stripes) 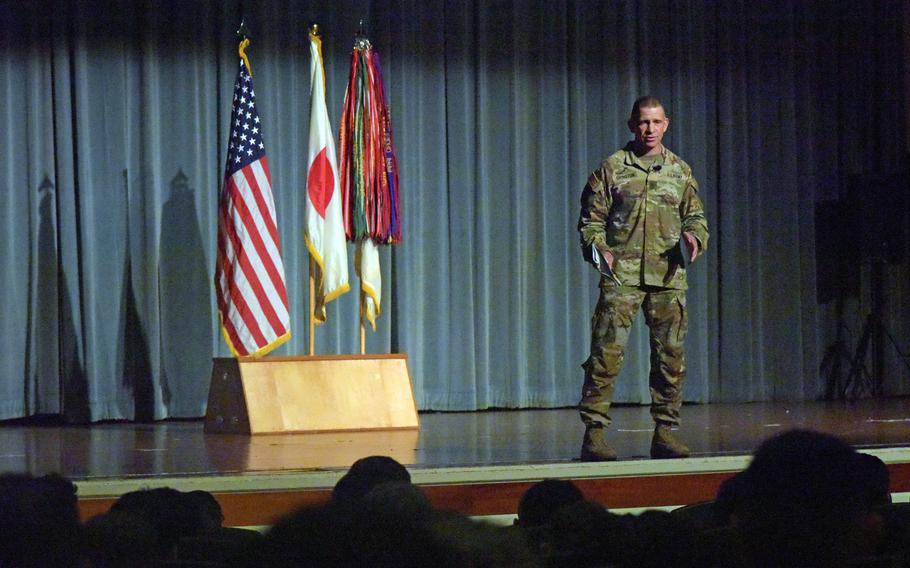 “I’ve gone to behavioral health,” he said. “I didn’t lose my security clearances. I still get to be sergeant major of the Army. I went last month.

While talking up the Army’s accomplishments, Grinston said the service has no problem retaining soldiers, even though it fell short of last year’s recruitment goal — 60,000 new troops — by 15,000.

During a post-meeting interview with Stars and Stripes, Grinston insisted the service doesn’t have a retention problem — “once soldiers join the Army, they like to stay in the Army,” he said — and attributed the shortfall to a culture shift and fewer qualified applicants.

“I believe part of the issue is the younger generation doesn’t believe in institutions, and the Army, Navy, Marines and Air Force – these are large institutions,” he said.

Also, only about 23% of Americans meet the Army’s requirements to serve, according to the sergeant major.

“Most people have this narrative, ‘If you can’t make it somewhere then you join the military,’ ” he said. “It is actually the opposite – you’re not good enough to join our military and that’s all military services. It’s a very select few who can actually meet the requirements to come in the miliary and that number is shrinking.”

Every university, every military branch, every employer is competing for the same group of highly skilled, highly motivated, physically fit people, Grinston said.

“This isn’t an Army crisis,” he added. “This is an American crisis that we need healthy Americans that can fill all ranks of all services.”

Sgt. Tavaria Driessen, 21, of Miami, wanted to know what Grinston thought of the ongoing conflict between Russia and Ukraine and if U.S. troops would ever be actively involved. Grinston said that’s up to the president and secretary of defense.

“If we do - that's bad,” he said. “Are we looking at World War III or not? That's the real question you must ask yourself … I hope we can solve this in a peaceful way.”