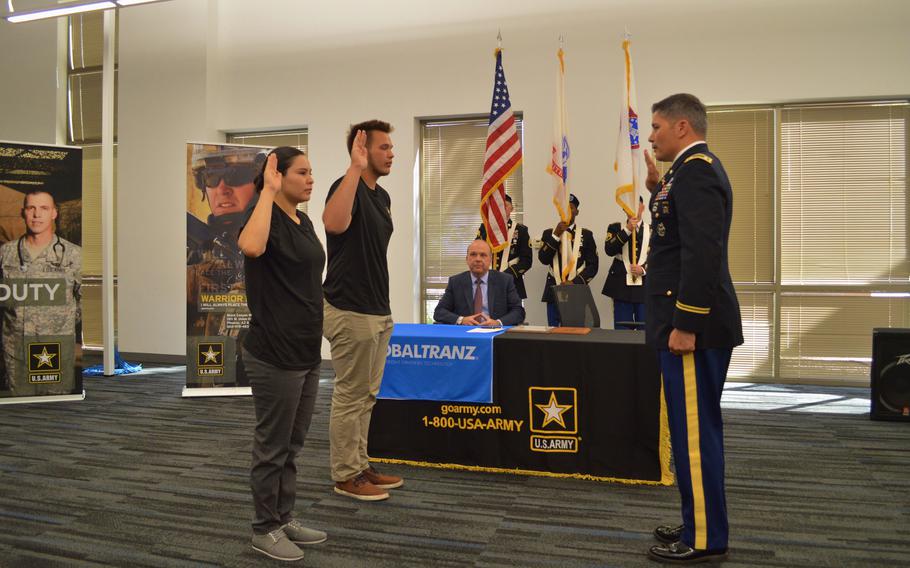 WASHINGTON ⁠— The Army’s top civilian acknowledged Friday that there are serious challenges in recruiting new troops to the largest U.S. military branch, and she pointed to several possible fixes that begin with young Americans identified as Generation Z.

“That’s a pretty big shortfall,” she said during an event with the left-leaning Center for a New American Security, a Washington, D.C., think tank. “Some of the challenges in recruiting have been a long time coming. They are not new developments.”

Earlier this year, Army leaders said they were aiming for a total force of 473,000 ⁠— including new recruits and existing troops ⁠— by the time fiscal 2022 ended Oct. 1. The service later cut that target by 12,000 and then another 6,000 by the summer.

The Army said the total amount ultimately came in at roughly 465,000, still thousands of troops less than the number budgeted for 2022.

Some of the recruiting troubles, such as declining trust in military institutions, have been known for years, defense officials have said. Others, like the impact of the coronavirus pandemic, are new.

“Only 9% of young Americans are interested in serving in the military,” Wormuth said, referring to a recent Defense Department survey that found only about 23% of young Americans between the ages of 17 and 24 years old meet all eligibility requirements without a waiver. Nine percent is the lowest amount since 2007.

Wormuth, 53, who has been Army secretary since May 2021 and was formerly undersecretary of defense for policy under President Barack Obama, identified many problem areas ⁠— but also detailed a series of new changes that are intended to solve them.

A key component, she said, is refuting negative perceptions about the Army, particularly when it comes to Generation Z Americans, who were born between the latter half of the 1990s and the early 2010s. Last week, Maxwell Alejandro Frost became the first member of Generation Z to be elected to Congress. The 25-year-old Frost will represent Florida’s 10th District in the House.

“They want community. They want purpose. They want what they’re doing to matter,” said Wormuth, who was director of the RAND International Security and Defense Policy Center before she became Army secretary. "I think we really need to reintroduce the Army to the country, to young people, to their parents, to influencers."

In September, officials from four military branches also told a Senate panel that recruiting is becoming more difficult and they underscored many of the same challenges that Wormuth pointed out.

“We anticipate the recruiting environment to be even more challenging in 2023 and beyond,” Lt. Gen. Caroline Miller, the Air Force’s deputy chief of staff for manpower, personnel and services, told members of the Senate Armed Services Committee.

Some of the most serious problems, Wormuth said Friday, are the change in lifestyle that comes with joining the Army and the negative perceptions in the public psyche, particularly among parents.

“[Parents are] worried that if [their] kid joins the Army they're going to suffer psychological harm or they're going to be sexually harassed,” she said. “So we have to put our money where our mouth is -- actions speak louder than words. We have got to show results in this area and not just talk about it."

“Life in the Army is not easy,” she added. “So, we have got to take care of our soldiers. We have to make sure they have safe workplaces where there is good morale.”

Wormuth said the Army has been proactive in gaining data from recruiters, parents and community and military leaders, and are taking a “multi-dimensional” approach to the answers. She said new efforts are taking form in policy, including a suicide prevention regulation and a “whole suite of training” for it.

The Army is also building a “prevention workforce” to analyze data and analytics, and hopefully identify where the gaps are and where more resources are needed. The service hired dozens of experts for the prevention workforce this year and expects to hire 200 more next year.

Wormuth also mentioned there will be a new emphasis on mental wellness checks and a new pilot program to streamline resources for sexual assault victims. On the response side, she said the Army has reshaped training to be more scenario-specific and less cumbersome.

"We're trying not to PowerPoint everyone to death,” she added. "I think all of these things will help us, but we cannot get complacent. We have to keep working on it."

The all-volunteer American military started in the 1970s, and some experts fear the trouble in recruiting could ultimately impact the strength, health and capabilities of the U.S. armed forces.

“The department anticipates we will collectively miss our recruiting mission despite accessing more than 170,000 remarkable young men and women [in fiscal 2022],” Stephanie Miller, deputy assistant secretary of defense for military personnel policy, told members of the Senate Armed Services committee in September. “This constitutes an unprecedented mission gap and is reason for concern.”

“There’s no sunlight on the horizon,” Sen. Thom Tillis, R-N.C., said during that hearing. “It is becoming clear that the all-volunteer force that’s served our country well over the past 50 years is at an inflection point.”

The Army, however, expects that many of its recruiting reforms – such as training troops to be leaders earlier in their careers and demonstrating the long-term benefits and professional advantages of serving in the military – will make a big difference.

“Even back in January, when frankly I think the scope of the challenge we were facing in recruiting wasn’t quite as clear as it is now, it was still clear to me that we needed to change how we were recruiting,” Wormuth said. "We have got a lot of work to do, and we have to roll up our sleeves. … [But] we are doing a lot to get after this.”