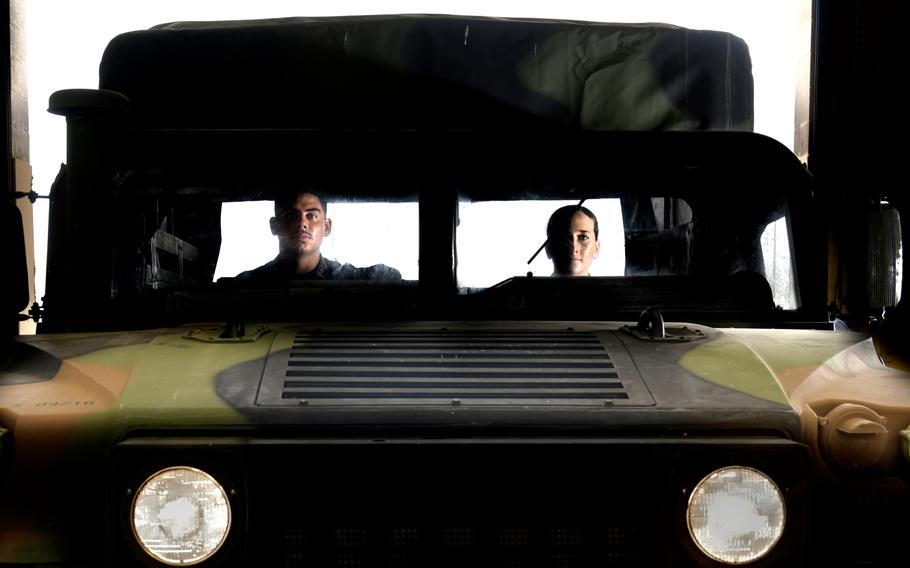 Marvin Fuentes decided to stay on in the Marines, where he is a Motor Transport mechanic, and so did Alexandria McFadden, who is in Motor Transport. They are in a Humvee in a repair shop at Camp Pendleton on Wednesday, Oct. 12, 2022. (Mindy Schauer, Orange County Register/SCNG/TNS)

At the top of the list was the newer Joint Light Tactical Vehicle, which is replacing the Humvee.

“It’s fun to drive, it’s easier to maneuver than a 7-ton and has more visibility,” the 22-year-old Marine said, adding that driving military vehicles has been quite the learning curve from the truck she drove around her small hometown of Potsdam, N.Y. “At first, it was definitely hard; it’s an over-sized vehicle.”

McFadden will be leaving Motor Transport to become a drill instructor at Marine Recruit Depot San Diego. And, if the Marines are willing to keep her after another four years, she hopes to be back in the motor pool doing logistics planning.

McFadden — one of only three women in her 40-person platoon — is one of the thousands of Marines who signed up this year for another four-year contract with the service branch as part of a new “talent management” program.

The program focuses on maturing the force by retaining Marines who excel in their jobs and assigning or promoting them to roles where they can build on previously learned skills. Typically, the Marine Corps has skewed the youngest among the service branches, with recruitment “overly focused” and “dependent” on first-time Marines. Of those, only 25% stayed on after their contract expired, meaning another round of training up their replacements.

Gen. David Berger, the Corps’ commandant, introduced his Talent Management 2030 plan last year as part of his effort to modernize the service branch. Berger said he recognized that while keeping high-performing, highly trained Marines could cost more initially, he believed it would pay off in the future with more mature and skilled Marines in a warfare space that is becoming more challenging and complex.

“Our processes and approach to personnel and talent management are no longer suited to today’s needs,” Berger wrote in his report. The Marines’ past framework, he said, treated every Marine like a round peg and every job like a round hole. A talent management system “recognizes that Marines and billets (jobs) come in different shapes and sizes.”

The Marines’ idea of warfare “places a premium on individual judgment and action,” he said. “We must bring into the service the right people with the right skill sets, measure their talents, and then match their skills to the duties they desire and are suited to perform. Once we invest in these individuals, we need to incentivize the retention of the right numbers of the most capable among them so they can continue to add value to our organization.”

Starting in October 2021, leaders sought out those Marines who excelled and by July, the Corps had hit its recruiting goals with the help of retention efforts — months early.

And the number of Marines choosing to stay meant fewer fresh recruits needed to be signed up and trained — about 2,400 fewer.

The Marines recruited about 28,600 active-duty Marines and filled the 4,602 Reserves it needed, officials said.

This fiscal year 2022 was the first in a decade where Marines exceeded retention goals; in previous years it averaged about 97% of its mission.

Instead of waiting for a Marine to show an interest in reenlisting, the leadership retention team screened 24,680 Marines and pre-approved nearly 2,500 for reenlistment, said Yvonne Carlock, a Marine spokeswoman for Manpower & Reserve Affair, the division that oversees Marine retention.

Marines who were pre-approved had an abbreviated submission process and Marine leaders plan to capitalize on the success of the program for the next year’s retention campaign, she said.

The retention efforts are also crucial as the overall pool of candidates for recruitment shrinks and the nation’s service branches compete for their interest. Officials estimate the pool the branches are recruiting from is about 400,000 people.

And the coronavirus pandemic is still affecting recruiting. There has been less access to high school students, and after remote learning at least 11% are out of shape and in some cases test scores have fallen.

Before the pandemic, many candidates delayed their entry by months.

“It gave them time to understand our culture and to get physically prepared,” said Capt. Joshua Collins, a spokesperson with Marine Corps Recruit Depot San Diego. “Now we have direct shippers that leave for boot camp in 30 days. We’re dwindling in our depth. Recruiting is difficult because we don’t have people on standby.”

Since the end of the Afghanistan war, there has also been a decrease in public confidence in the military and a growing civilian and military divide, which affects recruiting, Collins said.

To help with retention, the Marines are offering those who are qualified incentives, such as options for early moves from one base to another or an opportunity to move into a more desired job, and have made it so they can re-enlist on the spot without having to fill out paperwork that could take months and in the past led to some Marines losing interest, officials said.

At Camp Pendleton, the 1 Marine Expeditionary Force, which is the West Coast command that trains and deploys troops around the world, this year averaged an overall retention of 71%. Some of the jobs where the retention mission hit 100% included ordnance repair, military police, aircraft mechanics and tactical data systems administrators.

“We look for Marines that are the most competent,” said Master Gunnery Sgt. Jesse Hernandez, a career planner who makes sure jobs in the command aren’t left vacant. “We look for the ones with the highest rifle and pistol scores, where the education is complete, the highest PT (physical training), and the best work ethic.”

“When you identify Marines as the cream of the crop, they’ll re-enlist and that trickles down to others who will stay in,” he said.

One of the Marines identified was Cpl. Stephany Nolasco, 21, who enlisted in 2019 and just recently signed up for another four years. She works as an administrative specialist for the command, doing legal work and assisting limited-duty Marines and sailors who need help doing their paperwork and getting their documentation in order. Her job now, she said, is the perfect stepping-stone to becoming a Marine Judge Advocate.

“I think there is a lot I can offer the Marine Corps and a lot I can take out of it with education, life experiences and travel,” the Seattle native said.

Nolasco joined the Marines after she graduated high school — the opportunity for travel, education and adventure was more enticing than going to a local college.

“I’m very competitive,” she said, adding that the moment she hit the fleet, she started college, which is “not something many people do.”

Nolasco said she gets her motivation from her parents, who are Mexican immigrants.

“They put a lot of emphasis on the power of education,” she said. “When I complete that, I’ll fulfill their dream and set a good example for my little sisters.”

“I’m fortunate to be a legal clerk; that’s a small head start,” she added. “I dropped hints (about wanting to re-enlist) and they ended up choosing me. I think it will be a better experience doing law inside the Marine Corps.”

Similarly, Cpl. Marvin Fuentes wants to make the Marines his career. Like McFadden, he’s been a standout in Motor Transport, where he works as a technician while overseeing a platoon of 30 to 40 Marines.

Fuentes, who grew up in Virginia, said he’s always loved fixing engines, even as a kid when he helped his father on some of the equipment for his lawn service. Fuentes first became impressed with the Marines when he was in middle school and later in high school when he joined ROTC. In just over three years since joining, Fuentes, 21, has earned a reputation of “working on trucks that don’t break down.”

“Me and my corporal, we work on trucks and do it fast and proficiently,” he said. “At the end of the day, the trucks are your product. You either do it by the book and with integrity, or you don’t.”

McFadden, whose father, brother and grandfather served, said she is proud she is among those chosen for another service contract. She sees the value in the program for the young Marines she mentors.

“Keeping the motivated ones in will benefit the Corps,” she said. “I feel like otherwise, all this knowledge goes to waste.”