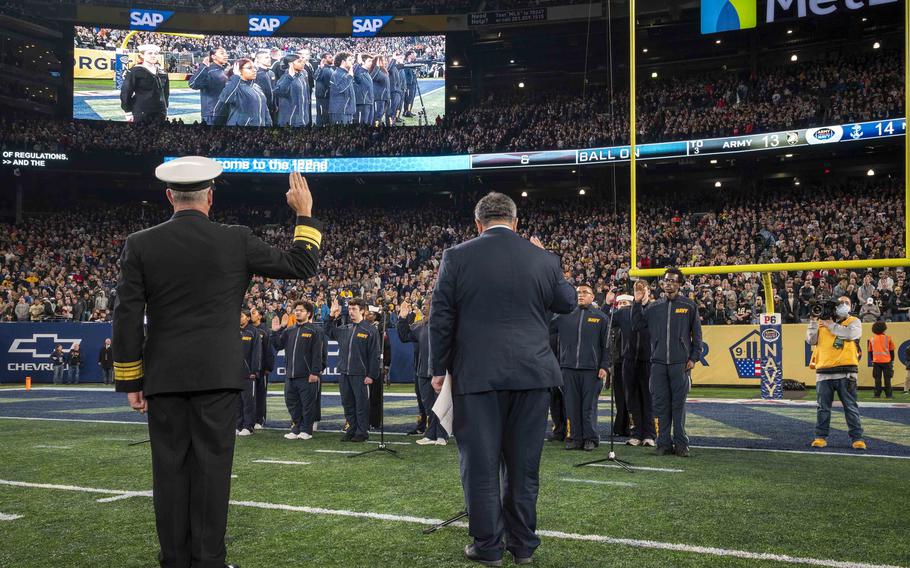 The Navy is now accepting recruits who score in the lowest-qualifying range on a mandatory entrance exam to bolster enlistment numbers as service leaders grapple with a complicated job market throughout the United States, a service official said Tuesday.

The Navy will accept up to 7,540 high school graduates in fiscal 2023 who score in the 10th to 30th percentile amongst their peers on the mandatory Armed Forces Qualification Test, according to a policy memorandum signed by Rear Adm. Alexis Walker that went into effect Monday. It is the lowest range from which the Pentagon allows services to enlist recruits, known as Category IV. By accepting prospective sailors who score in that range, the service hopes to meet its goal of enlisting 37,700 active-duty enlisted sailors in fiscal 2023, an increase of 4,300 from last year, said Cmdr. David Benham, a spokesman for Navy Recruiting Command.

"As we continue to navigate a challenging recruiting environment, changing the AFQT requirement removes a potential barrier to enlistment, allowing us to widen the pool of potential recruits and creating opportunities for personnel who wish to serve,” Benham wrote Tuesday in an email.

The Navy made its fiscal 2022 recruiting goal, enlisting 42 more recruits than its target of 33,400, Benham said. It came amid an overall shortfall for the Pentagon’s active duty recruiting efforts, driven largely by the Army missing its 2022 goal by some 15,000 recruits. Officials have pointed to myriad reasons for the tough military recruiting environment — blaming factors related to the coronavirus pandemic, a low unemployment rate in the United States, and a historically low percentage of young Americans who qualify for or have interest in military service.

The Navy is not the first service to make a major change to try to increase its recruiting pool this year. During the summer, the Army briefly approved a plan to allow some recruits into the service without a high school diploma before backtracking within a month amid public criticism of the move. Later in the fall, the Army opened a pilot program at Fort Jackson, S.C., aimed at coaching potential soldiers to improve their military entrance exam or physical fitness test scores. Service leaders have said the program has proved successful and expect to expand the program soon to other locations, including Fort Benning in Georgia.

The Navy’s recruiting policy change is considered a pilot program, and it will be reevaluated at the outset of fiscal 2024, which begins Oct. 1, Benham said.

While Walker approved enlisting up to 7,500 Category IV recruits — 20% of its recruiting goal, the maximum Pentagon policy allows — leaders anticipate only needing to accept about 2,000 recruits in that low-testing category, according to a Navy official.

The policy shift means some Navy hopefuls who score poorly on the AFQT will be accepted into the service, but many of them will not. Benham said those who score in Category IV on the AFQT must still score highly enough on other portions of the military entrance exams to qualify for a specific career field in the Navy.

The AFQT is only a portion of the military’s overall entrance testing known as the Armed Services Vocational Aptitude Battery, or ASVAB. The ASVAB consists of 10 different line scores that help the military determine the jobs that a prospective service member is qualified to do. The AFQT ranks an individual’s eligibility to serve against the scores of other recent test-takers.

Navy officials dismissed the idea that accepting Category IV recruits would lower the service’s talent pool. Benham pointed to the ASVAB line score requirements, saying “everyone who comes in under this policy change will be fully qualified” to serve in the Navy. The change simply gives those who scored lower than their peers on the AFQT but still scored well enough to merit serving in a Navy job a new “opportunity to serve,” he said.