Why Fort Jackson became home to the Army’s only around-the-clock, child care center 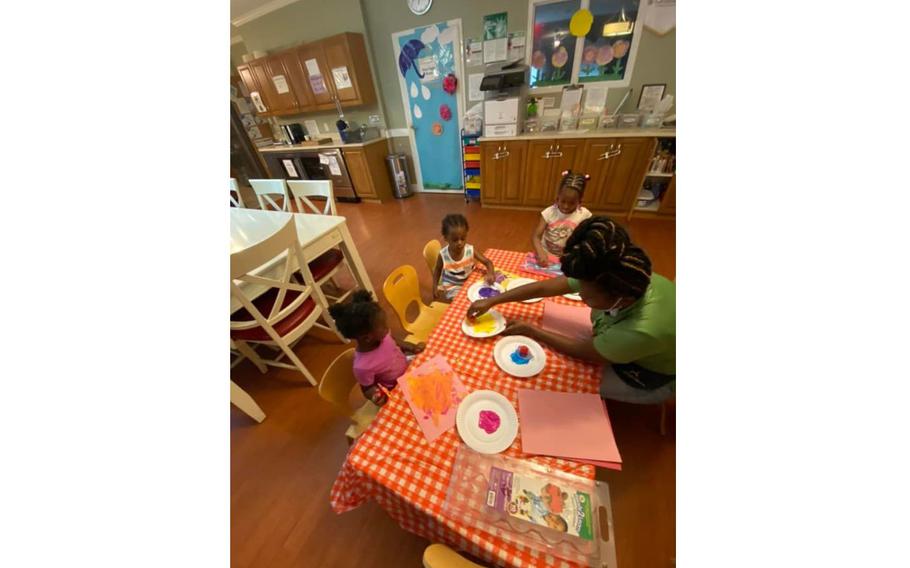 Fort Jackson, S.C., is the only base in the Army to offer 24/7 child care for soldiers because of its unique population and mission. Of the parents using child care at Fort Jackson about 35% are single or dual-military couples and many work long hours and weekends as drill sergeants. (U.S. Army )

When Staff Sgt. Marquis Foster learned he and his wife, Staff Sgt. Lionor Foster, would move to Fort Jackson, S.C., to become drill sergeants for the Army, they worried about who would help them care for their two sons.

Drill sergeants begin their days as early as 4:30 a.m., spend weekends with new recruits, and go into the field for days at a time. Foster said he started to shy away from the dream of being a drill sergeant once his kids, now 4 and 8 years old, were born.

He thought recruiting would better suit their family, but the Army had other plans.

“It does get kind of hard to figure out how to be the soldiers we've always been, and still be the parents we want to be as well,” he said.

As the Fosters prepared for the move from Hawaii, they learned Fort Jackson is the only base in the Army to offer around-the-clock child care to meet the needs of families with two soldiers and single parents assigned to critical missions that don’t fit into normal business hours.

“[The kids] have moments of hardship … and getting used to everything new, but I think they enjoy it,” said Foster, now seven months into his new job. “When they’re [in child care], they’re having tons of fun with their peers.”

Three years ago, congressional lawmakers began to press military leaders about meeting the child care needs of service members and requested a detailed report after hearing repeatedly about problems of long waitlists for child care services and little availability at some locations.

Access to safe, reliable care within a reasonable distance to their duty stations is needed for service members to be mission ready, Patricia Montes Barron, the deputy assistant secretary of defense for military community and family policy, said last month in a statement about expanding off-base care options.

There were more than 8,800 military children on a waitlist for child care in 2019 with nearly two-thirds of them younger than 2 years old, according to a report that the Defense Department provided Congress.

Some measures that lawmakers hope to pass this year in the annual defense spending budget include expanding a program to pay for in-home child care and reviewing the pay for caregivers in some locations to help with staff retention and ultimately expand the capacity of already existing facilities, according to an August report from the Congressional Research Service.

Since the Pentagon’s child care report was released in April 2020, each of the military services has grappled with improving access and availability, while maintaining a standard of care. The military has expanded partnerships off base, while also dedicating funds to renovate or build new facilities.

The Defense Department already spends more than $1 billion a year on child care operations worldwide, according to the Congressional Research Service report. It serves about 200,000 children and employs about 20,000 caregivers.

The Army alone provides care and programs annually for more than 140,000 children who are ages 6 weeks to 18 years old through on- and off-base facilities. About 5,600 Army kids are on waitlists for child care, said Ellen Lovett, an Army spokeswoman.

At Fort Jackson, waitlists can form, but they are typically able to get children placed into care within 30 days, said Sunny Bolton, coordinator for the base’s Child and Youth Services.

Because wait times for care vary based on location, the number of working parents in the family, and the age of the child, the Defense Department and the services don’t track this statistic across their populations, according to the department’s report on child care.

The Army built seven 24/7 child care facilities between 2007 and 2012 after hearing from soldiers that the service needed the option in some places, Lovett said. The facilities were designed to be more home-like than a typical day care and located at Fort Jackson, Fort Meade, Md., Fort Hood, Texas, Fort Riley, Kan., Fort Rucker, Ala., and Fort Stewart, Ga.

However, the 24/7 care option wasn’t often utilized after it was made available at the other locations and the bases have since converted the facilities to offer traditional child care.

It’s the demographic makeup of the 3,200 soldiers permanently assigned to Fort Jackson that has kept the demand for 24/7 care, Bolton said. Roughly 35% of soldiers using child care at Fort Jackson are single or dual-military parents, she said. Most of those parents work as drill sergeants.

“We do [24/7 care] because if we stop, then the mission of the basic training center will be interrupted,” Bolton said. 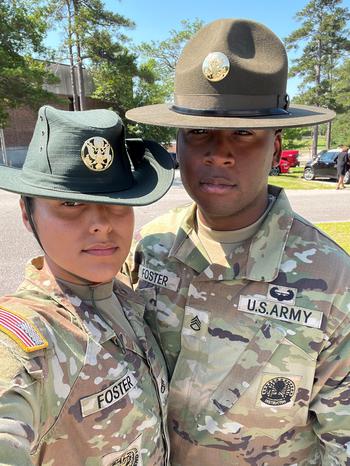 Staff Sgts. Lionor and Marquis Foster are married with two children and both work as drill sergeants at Fort Jackson, S.C. They rely on 24/7 child care provided at the base to be able to work long hours, overnight and weekends. (Photo provided by the Fosters)

Fort Jackson is the largest of the Army’s four bases offering boot camp, with about 60% of new recruits taking the 10-week course at the South Carolina base. That’s about 45,000 basic training soldiers each year, according to the base. Additionally, about 24,000 soldiers graduate each year from other schools at Fort Jackson, including the Adjutant General School, Finance School and Noncommissioned Officer Academy.

Child care regulations limit the time children can be in day care to 12 hours, Bolton said. Single and dual-military parents must get an exemption to the regulation from their commander to gain access to care later than 6 p.m., weekends and overnight. They also must submit their work schedules in advance and get a reservation, so Bolton knows when to schedule her workers for overnight shifts.

On evenings when kids are scheduled to stay late or overnight, the staff buses them to the overnight facility, which is designed to feel more like a home than a day care. It has a large dining table where everyone can eat together, couches, video games and a room with child-sized beds.

When the bus arrives to drop kids at the overnight facility, Bolton said the staff wait outside to greet the kids and try to keep them upbeat.

“We have made an intentional effort to make sure it's like home,” she said. “[The kids] are happy because they feel like this is a place that wants them to come and play.”

While no additional 24/7 child care facilities are planned for the Army, Gen. Gary Brito, who took command of the service’s Training and Doctrine Command in September, said he’s seen the positive impact that the Fort Jackson facility has had on the morale of drill sergeants there. He’d like to explore whether there is a need to expand the program to the other bases within TRADOC that host basic training, which are Fort Benning, Ga., Fort Leonard Wood, Mo., and Fort Sill, Okla.

“I know it’s probably very difficult to replicate [Fort Jackson’s program] on scale for the whole Army, but it’s probably something that would work at some places,” Brito said. “I want to learn more about it … fully understanding it’s a financial investment. Even if you have a facility, which is ready, it’s also hiring the qualified professionals we need.”

To run the 24/7 operation at Fort Jackson, it costs the base about $50,000 a month, Bolton said. That is for all services beyond the traditional 12-hour care model.

It doesn’t cost the soldier anything beyond their monthly child care fee to use the extended and overnight program, Bolton said. They don’t have children sleeping at the facility every night, and weekends and extended hours are the more common need, she said. The cost of full-time care varies based on family income and can range from about $300 to $700 a month, according to the Defense Department.

The coronavirus pandemic exposed some of the gaps in child care in the military and the civilian sector, particularly when it comes to retaining staff and hiring new employees, Lovett said. These jobs typically offer lower pay than other jobs with children, such as teaching, because they do not require a college degree.

To compete, Lovett said the Army is offering several initiatives to recruit and retain child care staff, including access to child care, hiring bonuses up to $2,000, retention bonuses and a 50% child care fee reduction. The Army also is investing in more in-home, child care options, which can offer more flexible hours and overnight care.

Even after the pandemic closed operations for more than two months in 2020, Bolton said she kept in close contact with her employees, and they have never had a staffing crisis. Fort Jackson’s Child and Youth Services offers other programming for kids in addition to day care and employs about 285 people, which is about 94% fully staffed for them.

Bolton said she does what she can within the parameters of the government’s pay structure to make certain staffers feel appreciated and compensated for their work, with incentives such as performance bonuses. Leader involvement also plays a role in making certain front-line caregivers have the resources that they need at work and feel supported, she said.

When soldiers have difficulty finding safe child care, it can have an impact on readiness, and Brito said the pandemic forced commanders to take notice.

“I can’t speak for all commanders, but I know many have had to prioritize child care,” he said.

Foster, the drill sergeant, said having this reliable, welcoming place for his kids on the days when he can’t be there has eased the transition to this new lifestyle at Fort Jackson for his family. It allows him to focus on his job because he isn’t worried about his boys’ well-being.

Foster said he didn’t grow up in a military family, but for his boys, this lifestyle is all they know. They’ve been attending Army child care programs since they were 6 weeks old and have only known their parents as soldiers.

“This 24-hour care has been a lot easier to rely on than family and friends to watch the kids,” Foster said. “In our situation, we don’t have family that travels with us. We are our own family. Having that kind of program is useful. Realistically, we won’t ever have this program again when we leave here.”