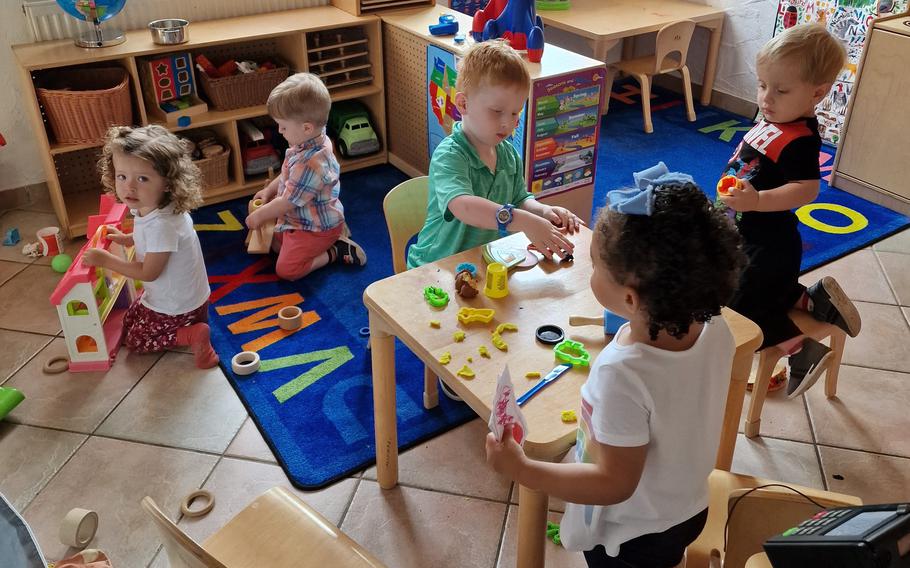 Children play in the care of Kenia Guijarro, a military spouse and Family Child Care provider, Aug. 26, 2022, in Matzenbach, Germany. Staffing shortages have made it difficult for some parents in the largest overseas U.S. military community to find day care. (Kenia Guijarro)

KAISERSLAUTERN, Germany — A chronic staffing shortage at child care centers in the largest overseas U.S. military community has left hundreds of kids on waitlists and few options for parents.

As of early August, Army and Air Force child development centers in the Kaiserslautern Military Community could handle only about 65% of demand. And one of the 11 centers is closed because staffing levels never came back to pre-pandemic levels.

Approximately 190 children were wait-listed on the Army side as of August, and the list at Air Force centers had some 250 names.

Parents may apply at either Army or Air Force facilities, so officials caution that waitlists are likely to include some duplicate requests from families willing to drive farther away if accepted.

The backlog reflects a persistent problem for service members and Defense Department employees. Four years ago in September, the number of kids awaiting placement was nearly the same as it is now, despite attempts to create more spaces and raise hourly wages for child care workers.

Rebecca Ward, a pharmacist and military spouse of an ophthalmologist at Landstuhl Regional Medical Center, has been waiting since her arrival in July to get a spot for her daughter Lily, 4.

Ward said that the last time she checked, Lily was 30th on the list.

“It seems every time we call to try to figure out where she is on the list, she's moved down,” Ward said. “She just keeps getting pushed further and further down. It's really disheartening.”

Dual-military couples and others have priority for day care slots, which can mean months of waiting for others in lower-priority tiers.

The problem stems from a lack of qualified caregivers to fill existing jobs, not constraints on space or resources, said Rhonda Hunter, the director of Family and Morale, Welfare and Recreation for U.S. Army Garrison Rheinland-Pfalz.

The garrison is operating at 72% of capacity, meaning it has the resources to accommodate up to 274 children.

“With 34 more team members on board in our child development centers, we could place an additional 100 children into care,” Hunter said.

At the Air Force child care centers, the overall staffing level is just 40%, with 92 job vacancies, according to the 86th Airlift Wing.

Air Force and Army installations in the Kaiserslautern Military Community largely recruit military spouses, most of whom leave after three years.

The services recruit at job fairs and offer incentives, including up to $1,000 in retention and recruitment bonuses.

Though officials say child and youth service programs offer competitive salaries and benefits, entry-level employees are paid $16.70 an hour, which is little more than food service workers at the base commissary or on-base baristas earn.

Those positions start at $15.39 and $15.75 respectively and require less training and responsibility.

‘I just wish I could help everybody’

In a spouses group on Facebook, one parent referred to the frequency of “take your kid to work day,” which some units have allowed to cope with the shortage.

Airmen worked from home more often during the height of the pandemic, but most units have shifted away from telework.

Although units retain some flexibility, telework isn’t an option in many military job fields.

For those able and willing to commit the time, home-schooling is possible. In a 2014 opinion, the German Education Ministry stated that German prohibitions on home-schooling don’t apply to U.S. personnel under the NATO Status of Forces Agreement.

Other recommendations by spouses included a private Facebook page with a compilation of local babysitters. The Ramstein Babysitters page has more than 5,000 members offering or looking for temporary help with in-home care.

Helping fellow service members may not be as easy as it seems, though. According to the Air Force, anyone providing regular child care for more than 10 hours a week in their home on base must be licensed. Failure to obtain a license could result in the loss of base housing.

People living on or off base can become licensed Family Child Care providers, who are independent business operators and work under their own contracts with the parents of children they care for. 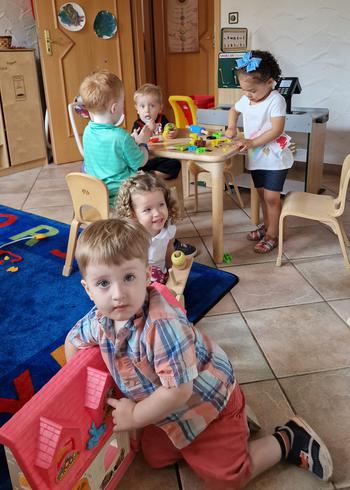 Children play in the care of Kenia Guijarro, a military spouse and Family Child Care provider, Aug. 26, 2022, in Matzenbach, Germany. Some U.S. military commands in Germany have provided spouses incentives to open their own day care businesses to alleviate the shortage of available spots on bases. (Kenia Guijarro)

Kenia Guijarro, the wife of an Air Force intelligence specialist at Ramstein, found it to be the ideal option after she arrived in October.

The mother of three offers in-home care from 7 a.m.-5 p.m. in the village of Matzenbach. Regulations limit her to watching no more than five children at a time.

“For me it’s about the peace of mind, of knowing that I can be home with my child, and I get to spend the day with my own kids and I get to watch them grow socially and emotionally as they learn to make friendships,” she said. “My favorite part is that every day I get to help other military families like ours.”

Soon after Guijarro qualified as a caregiver in the program, however, requests started flooding in.

“I had an overwhelming amount of messages, which is just so heartbreaking to me because I just wish I could help everybody,” she said. “Turning down families probably was one of the hardest things that I’ve ever had to do.”

To cope with a growing number of children age 5 and under without child care spots, Ramstein in 2019 began prioritizing its limited base housing options for people such as Guijarro who agree to become Family Child Care providers.

American service members are allowed to take their kids to German kindergartens or day cares, called kitas. But those facilities have few incentives to take on Americans.

German children 12 months or older are guaranteed a right to day care by law. Children of U.S. service members and civilians under SOFA are excluded from this entitlement.

That means American children who get the chance to enroll may be booted to make room for kids with German citizenship, though some parents have challenged this on legal grounds.

“In the city of Kaiserslautern, there are too few places for the demand,” said Anika Sedlmeier, a spokeswoman for the Kaiserslautern mayor’s office. “This means that even for German children it is sometimes problematic to get a place in time.”

For years, the city has worked to increase that number, Sedlmeier said. But the availability of spots has recently fallen somewhat because of the influx of refugees from Ukraine.

Parents have typically had an easier time finding care in villages outside the city of Kaiserslautern. But there is a lack of spots now in many of those communities as well, said Georgia Matt-Haen, a Kaiserslautern district government spokeswoman.

Military personnel aren’t prohibited from talking with German child care centers, but the chances of successfully gaining a spot are slim.

Exceptions are made for Germans married to an American and NATO members from European countries who are registered as Kaiserslautern residents. Families with mixed residency, however, also may be subject to German taxes.

The remaining alternatives include religious groups and private facilities, such as SBW International School Westpfalz in Landstuhl.

“There’s been a lot of interest in joining our school,” spokeswoman Charlotte Ducker said. “Most interest for placement is for early years, which has been the biggest problem for military parents. We’re able to offer a solution for many of them.”

It has 189 children of nearly 20 nationalities attending. Of the 93 American children, about a third are dependents of active-duty personnel, Ducker said.

Trying to keep up with demand, SBW recently opened two more classes for kids as young as 3½, Ducker said.

But with annual tuition starting at 14,400 euros, enrollment at SBW comes at a price point out of reach for most military personnel.

The lack of child care for DOD personnel isn’t unique to Germany. A 2021 Blue Star Families survey found that the availability of child care continues to be a problem for military families across the globe.

Meanwhile, the problem for parents in the Kaiserslautern Military Community is likely to be prolonged. The Army is looking to reposition about 500 Special Forces soldiers from Stuttgart to Baumholder as early as this year.

And Russia’s unprovoked war on Ukraine has increased U.S. support for NATO, a mission that relies heavily on Ramstein as an air transportation hub.