Lack of child care burdens US servicemembers in Germany 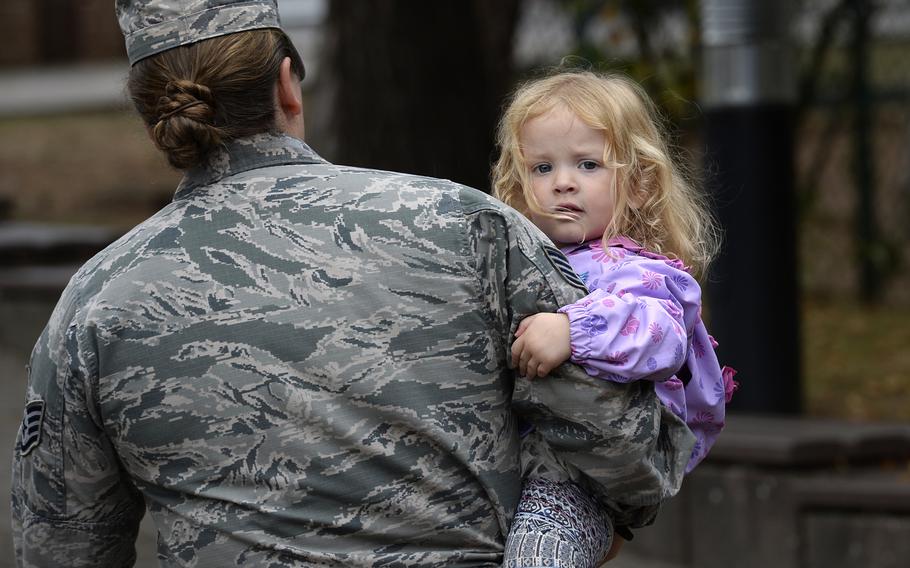 Staff Sgt. Symantha Schearer walks out of the Ramstein Child Development Center with her 3-year-old daughter, Aura, Thursday, September 13, 2018. Schearer said she was on the list for about a year before she got a spot at the CDC. (Brian Ferguson/Stars and Stripes)

KAISERSLAUTERN, Germany — A lack of day care in the largest U.S. military community overseas is straining families and impacting unit operations, as some servicemembers say they had to hire live-in help or have taken their children to work to make up for the shortfall.

Meanwhile, public German day care centers are allowed to take Americans as a lower priority than Germans, but many choose not to do so.

The shortfall in the base community, which acts as a transportation hub for missions in Europe, the Middle East and Africa, is happening as more servicemembers and their families are moving to the area.

About 500 soldiers from a communications battalion in Bavaria will be transferred to Baumholder by next year, and Kaiserslautern will get 220 more soldiers, the military said, adding to 53,000 Americans living in the area.

“In preparation for our move coming here ... we put our three kids’ names on the (day care) list,” said a senior officer from U.S. Air Forces Europe and Africa.

Shortly after arriving, the officer, who asked not to be identified due to security reasons, said she and her husband, also in the Air Force, had to go on work-related trips at the same time.

“We had to farm our kids out to people that we sort of knew for two nights just to fill the gap,” she said.

They eventually got a spot in the Miesau CDC for their youngest child. But it was about a year before they were offered before- and after-school care. In the meantime, they hired a nanny.

“When I had my youngest at home with a nanny, she couldn’t leave to go pick up the kids because she couldn’t get on base,” the officer said. “I was leaving at 3 p.m. to pick my kids up at school. Sometimes they would hang out in my office. I had a box full of toys and a place do their homework.”

Eventually — as is the case in many other families — the officer sponsored her mother to live with her in Germany to look after the children.

Pvt. Cheyenne Fierro, a supply clerk with the 39th Transportation Battalion, has been stationed in Germany since June 25.

“I have called around to find child care (for her 2-year-old daughter) and have been told by multiple people it is a year or longer wait.”

“If my husband is seeking employment we move up on the list,” Fierro said. “When he finally accepts the job we move up again. But why would he accept the job if we don’t know for sure if our daughter will have a spot?”

Even when a day care offer is received, it can take up to two months before the space is available, the Air Force CDC resource and referral office said during a phone call asking about availability. Air Force officials later said that shouldn’t be the case – a spot should be immediately available and held up to one month to allow parents time to end any previous arrangements.

As of mid-September, there were 206 children on the Air Force CDC waiting list and 225 on the Army’s list. Single servicemembers, dual military couples and dual working couples are the highest priorities.

The problem stems from a lack of workers, not a lack of space in the facilities, said Melissa Wesley, head of child and youth services at Ramstein Air Base.

By March, military officials said that centers could no longer offer hourly care and no new spots could be filled.

Col. John Zapata, 86th Mission Support Group commander, is part of a working group of base officials trying to solve the community’s child care woes. He is also a single dad with two boys.

“I’ve not only seen the readiness issue with me and my ability to get to work, but with the stress that it places on an individual in the family,” he said.

“We have tried to streamline the hiring process as much as we can ... but child care work is hard work,” Wesley said. “You’re doing eight hours where you are on. Your down time is your lunch, your break.”

To compensate employees and new hires, Air Force officials have increased the pay for these jobs twice in the last year to $12-$14 an hour. However, employees at P. F. Chang’s restaurant on Ramstein are paid about the same and don’t require lengthy training.

Youth services also must hire from a transient workforce, as many potential employees are military dependents in Germany for only about three years.

“We can talk all day about how many people we’ve brought on,” said Dave Driscoll, chief of nonappropriated fund human resources. “At the same time, we have people going right back out.”

The lack of off-base care in the local area adds to the problem.

In Germany, Americans are the last priority for local child care. Facilities are subsidized by local governments and their citizens pay taxes to support this service.

Since 2013, all German parents with a child 12 months or older have the right to a day care center.

“When we got here we were interested in getting our youngest into German kindergarten,” said the USAFE officer. “Our town doesn’t take Americans (and) there’s no way to pay into the system if you don’t pay German taxes.”

Children of servicemembers and civilians under the NATO Status of Forces Agreement have no legal entitlement to German kindergarten. However, they can attend if the schools have the space and the desire.

Zapata said the base wants to work with the city to try and find a solution.

In the Kaiserslautern area, the Army and Air Force operate seven CDCs on six military installations. Of those, the Kleber Kaserne CDC has been closed for at least 18 months due to construction. Staff shortages are also playing a role, said an official who was not authorized to speak on the matter; however, Army garrison spokesman Ray Johnson said Friday that only construction, and not staffing, was the reason for the closure.

Ramstein Air Base has a second CDC building that is scheduled to open once it is staffed.

Working around the system

Family child care providers who work out of their homes can accept children just like a CDC, but the list is short and the process to become a provider can take months.

Some parents rely on the Facebook page “Ramstein babysitters,” where Americans and residents of Germany advertise their services.

Friends and neighbors are an option. But regulations state that a provider not certified by the military can only offer care for 10 hours a week in their home. If the provider comes to the child’s home, that rule does not apply, Wesley said.

Lauri D’Ercole, an Air Force civilian, hired an au pair after it became too costly to pay their neighbor 300 euros per week, or about $350, to watch three kids.

“We wound up getting a really good au pair,” D’Ercole said. “At a minimum it’s 260 euro a month for her, but we also cover her housing allowance, as she moved into our house. She has her own private bedroom, fully furnished with a lock on the door and private bath.”

With three kids and two full-time jobs, the D’Ercole family pays their au pair more than the minimum.

“For some people the negatives would be having a stranger move into their house,” D’Ercole said. “We felt confident enough because we video chatted with them to see if they were the right fit for our family and to let them talk with our kids to see how they did with them.”

In August and September, the Air Force had 47 applicants, and the Army had 75 for day care jobs, including those at Kleber CDC.

“With streamlining the process, in some cases, we have decreased the time to 13 days from initial tentative job offer to starting in the program,” Wesley said. “Of course, we must have people actually apply to get to being able to interview and select.”

The Army recently changed its process as well. Child care workers can start as a provisional hire after an FBI fingerprint check and receipt of self-disclosure statements that reveal no red flags.

The screening process should take six to eight business days, an Army official said; however, employees will still be required to complete a more comprehensive investigation during the provisional period.

The Air Force is also looking at ways to partner with the community.

“The first step is to find the facilities and the caregivers that are willing and able, and then working to ensure that we have some insight into how they do things so that we can ensure that it meets all our standards and ensure the safety and security of the children,” Zapata said. The second step is addressing the cost and looking for ways to make it “cost neutral” to parents.

Ramstein officials will hold a town hall meeting from 6 p.m. to 7:30 p.m. Wednesday at the Ramstein Youth Center, Building 428.

They will provide information and ask for ideas and comments from concerned parents.

“I think it’s a good system of how they take care of the children but just awful on how they don’t have enough room for all of the people they bring here with families,” Fierro said. “I just feel like they should have it set up a little better.”